3/15 draft - ready - The current world record Atlantic halibut, from 2013, is 12% larger than the previous record holder from 2004. Such records are usually broken by tiny margins

Orthodoxy means not thinking–not needing to think. Orthodoxy is unconsciousness.”

Based on the virus unusual structure it is most likely “man made” and there is a theory coronavirus was somehow leaked or released from the Institute of Virology in Wuhan China, said Professor Fang Chi-tai from the National Taiwan University (NTU).

The Professor claims it was very possible that the Wuhan Chinese scientists created the deadly virus by simply adding four amino acids to an existing bat virus, which therefore makes it much easier to transmit to people .

In February a Chinese scientist announced the true cause of the spread of coronavirus, who broke cover and said the oubreak started in a science laboratory in Wuhan yards away from a wet market.

A scientist told how a sick bat attacked the researchers and bled on them and urinated on another , they were then forced to quarantine themselves for 14 days.

“We noted two laboratories conducting research on bat coronavirus in Wuhan, one of which was only 280 metres from the seafood market ."

It’s March 2020, and great positive changes are underway at every level of our reality. They began in earnest in 2012 and have been increasing in speed and magnitude since. I’ve been writing articles on the subject since 2013.

I have concluded that these changes are being driven by untold thousands of simple, inexpensive Orgonite devices based on Wilhelm Reich’s work. I believe that those devices are collectively unknitting and transforming the ancient Death energy matrix that’s been patiently built and expanded by our about-to-be-former Dark masters, well, all the way back to Babylon and before. And as a result the Ether is returning to its natural, ages-long state of health and vitality.

One of those changes is that Nature is booming and burgeoning to a level not seen in my lifetime. Since that statement directly refutes our State Religion, which holds that " Poor Mother Gaia is Dying, Crushed by the Virus-Like Burden of Mankind ", I’ve appended numerous mainstream news accounts below to support it.

One, from 2013, is headlined “515-Pound Halibut Caught By Marco Leibenow Near Norway May Be World Record.”

It reads “The 515-pound halibut may be the largest caught yet. The current record stands at 459 pounds for Pacific halibut (Alaska, 1996) and 418 pounds for Atlantic halibut (Norway, 2004), according to the International Game Fishing Association. Liebenow has reportedly contacted the IGFA, but is still waiting on the association’s approval.”

The current world record Atlantic halibut, from 2013, from Norway, weighed 515 pounds, and was 12% larger than the previous 459-pound record holder from 2004. Such records are usually broken by tiny margins, as the organism gets closer and closer to its maximum possible size.

This record was broken by a huge margin after standing unbroken for almost 20 years.

The record prior to 2004 has been scrubbed from the web.

Another story below from 2018 blatantly omits the current record from 2013, and with a straight face, reports the 2004 record as current.

Such records are usually broken by tiny margins, as the organism gets closer and closer to its maximum possible size. The author described the huge increase this way: “Grubenhoff’s walleye topped the previous record…” Where “topped” Implies the new record just exceed the old, when in fact it exceeded it by a very large margin. That’s hedging.

And that’s an average annual increase in size of .75% over those seven years.

That’s an average annual increase in size of .42% over those five years.

The growth rate of the Washington state record Walleye is increasing, going forward in time, something that’s not supposed to be scientifically possible.

The primary driver of the size and longevity of any organism is the relative health of its Etheric environment.

A number of years ago, when walleye – some big walleye – started showing up in the Columbia River, there were experienced Midwest natives dismayed at the lack of interest among trout- and salmon-oriented Northwesterners.

(The author is putting forward the ruse that larger walleye migrated from somewhere else - versus the truth, that the walleye in the Columbia are growing bigger than they ever have previously, in all history. - ed)

“Someday,” the Midwest natives said, “the U.S. record is going to be caught in the Columbia.”

It hasn’t happened yet, but we’re getting closer.

Mike Hepper, a veteran angler from Richland, set the state walleye record with a 19.3-pound hog he took from the Columbia above McNary Dam on Feb. 5. He used a spinner/worm combo. The fish beat the old record of 18.9 pounds caught in 2002 in the John Day Pool, downriver.

One German fisherman may have just reeled in a world record.

According to fishing tour company Angelreisen Hamburg, Marco Liebenow was fishing off the coast of Norway when he managed to catch a 515-pound halibut in July.

Speaking on behalf of Liebenow, Angelreisen Hamburg’s David Bottcher said that reeling in the fish felt like pulling in a submarine because of its size, The Daily Mail reports. After 90 minutes, Liebenow and three other men managed to haul in the massive catch, but couldn’t fit the 8.6-foot fish on their boat. Instead, they had to drag it back to harbor alongside the schooner.

The 515-pound halibut may be the largest caught yet . The current record stands at 459 pounds for Pacific halibut (Alaska, 1996) and 418 pounds for Atlantic halibut (Norway, 2004), according to the International Game Fishing Association. Liebenow has reportedly contacted the IGFA, but is still waiting on the association’s approval.

(The author puts the larger Pacific halibut world record in between the other two, both of which are Atlantic halibut, and both of which were caught off Norway, to draw your attention away from the jarring 418 pound to 515 jump in the Atlantic halibut world record. They hedged again by omitting the percentages. So I had to do the math. The pending world record Atlantic halibut, from 2020, from Norway, weighed 515 pounds, and was 12% larger than the 459-pound previous record holder from 2004, also from Norway, after standing unbroken for almost twenty years. Such records are usually broken by tiny margins as the organism gets closer and closer to its maximum possible size. - ed)

John Grubenhoff of Pasco, Wash., caught this 20.32-pound walleye, a new Washington state record, on Feb. 28 in the Columbia River near the Tri-Cities.

A walleye weighing 20.32 pounds caught in the Columbia River on Friday is a new Washington record.

John Grubenhoff, 57, of Pasco was fishing in the McNary Pool near the Tri-Cities when he caught the egg-heavy female measuring 35 1/2 inches long and 22 3/4 inches in girth.

A state biologist witnessed the weighing on a certified scale on Friday. State biologist Paul Hoffarth measured the fish on Saturday and the fish was confirmed as a new record on Wednesday.

The world record listed by the International Game Fish Association is 25 pounds caught in Old Hickory Lake, Tenn., in 1960.

(That’s 5% larger than the previous record. Such records are usually broken by tiny margins. - ed)

That was when the 8-foot-long, 416-pound halibut began to shake its giant head, putting incredible pressure on the gear.

They used a time-tested measurement formula to estimate the weight at 416 pounds. That’s only about three pounds shy of the world record Atlantic halibut – a 418-pound, 13-ounce fish caught of Norway in 2004.

(This story, from 2019, blatantly omits the current world record Atlantic halibut caught off Norway in 2013. Who controls the past, controls the future. - ed) 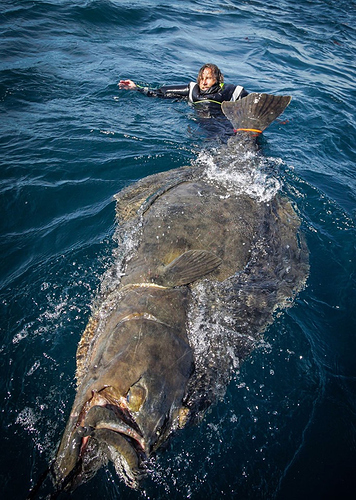 November 16, 2019 - DROP THE BASS! Angler believes he beat British record by catching a 20lb sea bass — but he had to throw it back because of EU law

AN ANGLER who believes he caught a record sea bass had to throw it back because of an EU law.

Oban Jones, 19, is adamant his catch topped 20lb — beating the British best of 19lb 9oz which has stood for 32 years.

Oban Jones is adamant his whopping catch weighed over 20lbs, but because of a controversial EU law he was forced to throw it back

But he returned the 3½ft fish as recreational anglers are not allowed to keep even a single bass during their breeding season between November 1 and December 31.

Yet, the EU rule does not cover super-trawlers that accidentally scoop up hundreds of bass while dragging huge nets for mackerel and pollock in the English Channel.

Bryant Rackers of Bonnots Mill has broken another state fishing record. He caught a shorthead redhorse that weighed in at 2 pounds, 6 ounces.

According to the Missouri Department of Conservation, this is the first record for the species under alternative methods. It was caught Feb. 16 using a trotline.

(Under the false guise of familiarity, the author has omitted the name of the fish, as well as the name of the state, to make the subject drastically less searchable. - ed)