It is regarded as an oasis of calm and tranquility, and the nation’s capital for alternative health therapies and spiritual healing remedies. 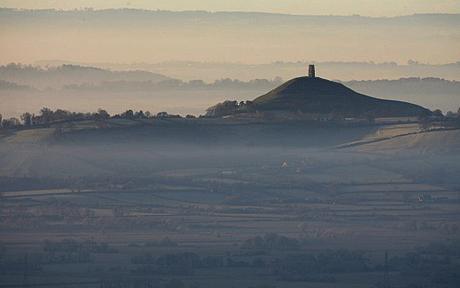 By Andrew Alderson and Simon Trump

But now the residents of Glastonbury , which has long been a favoured destination for pilgrims, are at the centre of a bitter row in which many blame the town’s new wireless computer network - known as wi-fi - for a spate of health problems.

There are now calls for the project, the first of its kind in Britain, to be “unplugged” and for wi-fi masts in the centre of the Somerset market town to be removed just seven months into its experimental run.

Meanwhile soothsayers, astrologers and other opponents of the wi-fi system have resorted to an alternative technology - known as “orgone” - to combat the alleged negative effects of the high-tech system.

In May, Glastonbury - which has a population of 9,000 and which lends its name to the country’s largest rock festival, staged on a farm six miles outside the town - became the first place in the country to have a free wi-fi network installed in its town centre. The £34,000 project is financed by county council and regional development agency funding,

At a public meeting to discuss alleged health problems in the Somerset town, residents complained of numerous symptoms including headaches, dizziness, rashes and even pneumonia.

Protesters claim that radiation associated with the wi-fi network suppresses the production of melatonin, a hormone which helps to control sleep patterns, regulates the body’s metabolic rate and boosts the immune system.

One of those who claims to have been affected is Natalie Fee, a former yoga teacher, who has now moved home - from inside to outside the wi-fi zone - so that she can protect her son Elliot, five, from what she sees as the harmful effects of wi-fi.

“I would like to see the masts removed,” she said. "Perhaps one day that will happen and hopefully it won’t be too late.

"I had a radiation expert come round to take measurements at our old home which was within sight of one of the masts. The highest reading was in Elliot’s room.

“I thought Glastonbury was a rural town. I don’t want my son exposed to risk 24 hours a day, including at his primary school which is within the wi-fi zone. I would be failing in my duty as a parent if I did.”

Matt Todd, who campaigns against EMFs, said that residents had complained that chakras and ley lines are being disrupted. “They believe positive energy flows are being disturbed,” he said.

Mr Todd has started building small generators which he believes can neutralise the allegedly-harmful radiation using the principles of orgone science. The pyramid-like machines use quartz crystals, selenite (a clear form of the mineral gypsum), semi-precious lapis lazuli stones, gold leaf and copper coil to absorb and recycle the supposedly-negative energy.

“I have given a number of generators to shops in the High Street and hidden others in bushes in the immediate vicinity of the antennae. That way you can bring back the balance,” said Mr Todd.

Orgone science was developed by the Austro-Hungarian psychoanalyst Wilhelm Reich, who claimed all living matter contains a biological energy. Mr Todd added: "The science hasn’t really got into the mainstream because the Government won’t make decisions which will affect big business, even if it concerns everyone’s health.

“I think wi-fi has tipped things over the edge because a lot of people can feel it. It seems to have introduced this large blast of energy into the environment and that’s what people are picking up on.”

Jane Saunders, who runs the Glastonbury natural health clinic, felt so strongly she founded the Why Wi-Fi? protest campaign. “I am not a Luddite and I recognise there are benefits to new technology,” she said.

"Initially wi-fi was a development I welcomed with open arms, especially with teenage children who need to be on-line almost all the time.

“But I had to take it out and go back to a conventional broadband cable network because it was affecting my health. I show symptoms when it’s switched on that I don’t when the network is off.”

David Heathcoat Amory, the local Conservative MP, said: “I have detected no public support for this project and I have received many letters and emails from concerned residents who believe the siting of the emitting masts are causing health problems.”

A spokesman for Powerwatch, an independent EMF pressure group, said: “Someone using a wi-fi laptop will be exposed to approximately twice the level of radiation as someone living 70 yards from a mobile phone mast. Unlike the food and drink industry whose products have to go through extensive pre-market trials and testing, there is no safety net for wireless devices.”

However, Dr Eric de Silva, a physicist at Imperial College, London, disagreed. He said: “All the studies which have so far concluded show there is no evidence of a connection between exposure to wi-fi and ill health.”

A Somerset County Council spokesman said: "The project was established to support the local economy and encourage tourist and business visitors to stay longer and use local services.

“It has the potential to be a real asset. It conforms to all UK and EU telecommunications health and safety standards, but we do take public concerns very seriously and a review of the system is due to be completed in the New Year.”

It is regarded as an oasis of calm and tranquility, and the nation's capital for alternative health therapies and spiritual healing remedies.