I thought it was time to make a longterm chart, with all these wrong charts going around, hehe. They are wrong because bitcoins support and resistance lines are NOT linear in the logarithmic chart. I think that the correct fit is a square root...

The author of this graph has updated it recently, stating:

It turns out that this prediction here has become way too conservative. Bitcoin started the bullmarket earlier than predicted. I updated the longterm chart

Updated longterm BTC chart: The road to 1 million. for BNC:BLX by...

I am a BTC bull, but I see far too many overly optimistic price projections on tradingview. They seem to draw an exponential channel, instead of the current one, that is curved. While of course it can be that BTC goes out of the current channel, and...

An interesting article from DailyWeath includes a simple to understand but bullish overview and outlook for bitcoin, including an outlook graph very similar to those posted above, but based on the Stock-to-Flow model (“S2F”), predicting bitcoin’s price may reach $1,000,000 by around 2024:

New millionaires will be minted… likely even billionaires…

We will soon see another bull run in bitcoin and cryptocurrencies of a magnitude that will put even the dot-com bubble to shame.

In fact, thanks to a single metric – scarcity – I believe that within eight years, bitcoin could be worth 100 times as much as it is today.

Halving refers to the payouts, or rewards, that bitcoin “miners” receive for securing the network.

By cutting the rewards in half, bitcoin’s “inflation rate” – the flow of new bitcoin entering the market – drops as well. This means bitcoin, as a currency, gets stronger over time as its inflation drops.

Anticipation of the 2020 halving dominated crypto-related headlines for more than a year. When it finally came on May 11, bitcoin’s inflation rate fell to about the same as the U.S. dollar’s (1.8%).

Here’s the key point… Previous bitcoin halvings have roughly marked the starting point for huge run-ups in bitcoin’s price. After past halvings, bitcoin has soared as much as 8,000%.

We expect to see similar gains this time around…

One model, known as the Stock-to-Flow model (“S2F”), takes a look at bitcoin’s scarcity by dividing its supply (its “stock”) by its annual production or inflation (its “flow”). Since bitcoin’s future supply is known, we can use that calculation to project future price ranges.

By this model, bitcoin could hit $100,000 sometime in the next four years and $1 million per token within the next eight years… 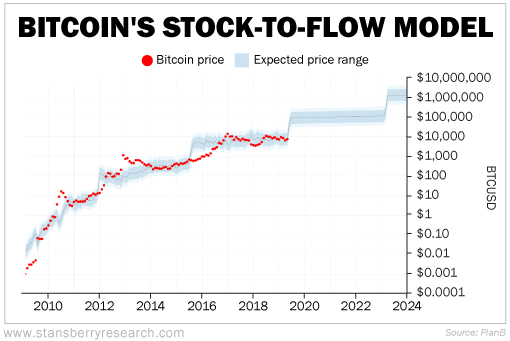 Remember, of course, that these projections are far from guaranteed.

But my own calculations are similar. And on a stage in front of hundreds of investors at the annual Stansberry Research conference last October in Las Vegas, I predicted that bitcoin will go to $1 million in our lifetime.

Importantly, though, the recent halving is still only part of the story.

It’s the big catalyst for the coming rally. But several tailwinds today are putting bitcoin and other cryptos on an unstoppable path to widespread adoption… And our financial system will never be the same.

As the Federal Reserve and other central banks continue to print more and more money amid the ongoing pandemic, a lot of people are starting to understand the power and use for bitcoin and other cryptos as an alternative to the U.S. dollar.

Even the U.S. government seems to be paying more attention.

On July 22, the Office of the Comptroller of the Currency (“OCC”), which regulates the U.S. banking system, quietly released a letter explaining that it could take “custody” of cryptos on behalf of their customers…

In plain English, this means that, overnight, cryptos became as legitimate of an asset as the title on your home or car or a certificate of deposit.

This adoption isn’t going to happen tomorrow. But it’s coming soon. And that’s why you need to buy bitcoin today…

But here’s another critical point I want to make so everyone understands the importance of what I’m talking about.

While bitcoin introduced the world to the idea of computer-based currencies, it also spawned a new wave of technological innovation across many industries…

To understand why, you’ve got to understand not just bitcoin, but the technology that powers it…

Every crypto has a blockchain as its core technology. Think of the bitcoin blockchain as a giant Excel spreadsheet that shows the complete transaction history and location of every bitcoin.

Every 10 minutes, the spreadsheet gets updated as an additional “block” of new transactions is added. A blockchain is merely a chain of new blocks.

Everyone can have their own copies of the spreadsheet. It’s completely transparent.

Let’s say Jim sends 1 bitcoin to Sally. When the transaction is processed by the blockchain, the spreadsheet is updated. Jim’s balance is docked a bitcoin, and Sally’s is credited one.

That’s the job of bitcoin “nodes” and “miners.” They’re computers that run software to support the bitcoin network and keep it operating smoothly.

Miners are run by individuals or groups who contribute money toward buying powerful computer systems, known as mining rigs.

Why do people contribute time and powerful computers to the bitcoin network? Because they can get compensated in bitcoin.

But to get that honor, these computers must first solve a complex mathematical problem and compete with others who are trying to do the same thing. The first miner to solve it wins 6.25 bitcoin and gets to post the next block to the blockchain.

Bitcoin itself has been a proof of concept for blockchain technology…

Its success has shown the world it’s possible for independent and fragmented entities (miners) to enable strangers to exchange value with no need for intermediaries.

And it can be done in a completely transparent, verifiable, and open way. Said another way, the bitcoin blockchain is single-handedly doing the job of more than 100 years of financial infrastructure.

It’s the Federal Reserve, the Treasury, the banking system, and auditors all in one package…

It’s immune to government control (and government manipulation). And with a fixed supply of ultimately just 21 million bitcoins… it can’t be inflated away.

No other currency in history can claim that… not even gold, which suffers a form of inflation as miners dig more of it from the ground.

That’s why many people describe bitcoin as gold 2.0.

And that’s why I anticipate that bitcoin’s underlying blockchain technology will “reset” our financial system. 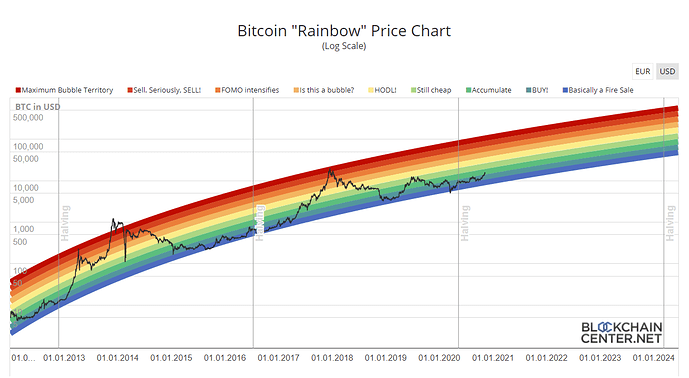