I feel responsible to share some of these experiences.

I’m led to believe the Symbol of the Enemy may have struck a raw nerve, shortly after the discussion, between Tennessee and Charleston, we were tagged for the first time by a pair of feds. The first had the licence plate KEEN, and the second, in a beemer with dealer plates, would follow up along side and ease back. I was oblivious, and when it dawned on me what was happening they both sped off. I did have Georg’s mini wand plugged into his silver zapper, to be fair. A sickly feeling accompanies thoughts of KEEN, and I am hoping to encounter him again. If any of you come across him, please do him justice.

The Symbol of the Enemy, anyway, is placed on the backburner for now. Jeff hopes to get to it soon, and I think it might be worth looking into.

In Charleston, by the way, while walking through the battery, one of the mansions was having a small to-do on the front porch. As I passed, loudly and distinctly the words “I am a Knight of Malta” were declared. I have no clue what this means, but surely Knights of Malta are tied in with Knights Templar or some other outdated organization. Again, it is my hope to encounter him once more, I will not miss the opportunity to openly claim my own allegiance in the presence of darkness(stupidity), come what may.

The Earth Fare in West Ashley is a great place to meet interesting Charlestonians, and for the first time in my orgone career I encountered someone who not only had heard of orgonite, but was a reader of the EW forum. He does not post, but as it turns out he has been supplying resin to Yoh**** who has been actively, silently, gifting for a while from California to Atlanta to Charleston. In fact, the orgonite I had with me he thought was product of Yoh**** and the conversation was rather confused. We quickly cleared things up and I gave him about 6 tbs, and left with the promise of resin.

Brandon and I didn’t meet up until yesterday, finally, and since receiving the tb’s he has felt under etheric attack. He is highly sensitive to such things, which Thank God seem to go right through my thick skin. I gave him Georg’s wand and the silver zapper, along with Christie’s coil winding form which he took an immediate liking to, and he gave me 25 gallons of pretty pink resin. Brandon is now working with coil forms and producing orgonite of his own.

Yesterday, hunting for crystals in atlanta to begin orgonite production afresh, found ourselves in a small area called Little Five Points, my partner felt the energy very dark and vampiric. They were advertising, by the way, heavily for this October 5th political scam Don pointed out. We were fortunate, however, in discovering Crystal Blue, a stone vendor in the heart of Little Five Points. We were outright amazed to find that Brett, the operator of Crystal Blue, is sympathetic to the orgone movement, and has been in contact with Yoh**** for a long time. Brett was very kind in providing small crystals at a reasonable rate. Make Crystal Blue a stone stop, for sure, on your next Atlanta trip.

I hope this was interesting, if nothing else! Lets all stay heart connected and see what happens.

Julia left this morning for St. Thomas with orgonite destined for the Caribbean. Dolphins willing, she hopes to establish a relationship and begin work from the island, where she will be for at least a few months, possibly longer.

Peter, in his mid seventies and the caretaker of the ashram in Molena, GA, left this morning with Ron, a retired chemist who has long been interested in Reich, with orgonite destined for northern Georgia, near the beginning (end?) of the Appalachian Trail. We gifted the reservoir near Griffin on Thursday, where new fences have been erected and poison is being sprayed to destroy vegetation near the dam. There may be good reason for this, but with 70 odd years in the area, Ron’s suspicion of foul play is credited.

The week before last, when we began introducing orgonite to the area, the large hilltop array on Day Rd. was heavily overgifted. Before the gifts reached the ground, a large sylph cloud appeared. The following day, vast displays of unique cloud shapes were seen in the sky, some of them in a circular pattern “dancing around the fire.” For the past few years, off and on, I’ve visited this area and there have never been clouds like this - a neat, cut-and-dry confirmation for the efficacy of orgonite. 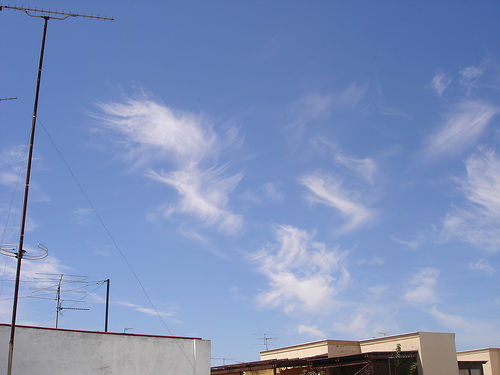 yes, yes, yes, todd the picture says it all. thanks for the anchor in charleston (right?). we have got to make an orgonite connection between y’all and us here in florida will you pm me to see what we can work out?.