For A Safe And Happy Soccer World Cup In South Africa

Blowing up one of those lovely new stadiums with a dirty nuke would be a mouth watering prospect for our unsavoury adversaries, wouldn’t it?
And thereby bombing South Africa even firmer in to the fear and control network than she already is…
Obama recently showed his trumps unwittingly when he was talking about dirty suitcase nukes going off in London, Paris, or -hell, of all places- Johannesburg.
Weird eh?
A former school friend in Berlin who “tends to hover rather on the official side of the permitted popinion spectrum” most of the time, also ominously warned me about possible “terrorist” (=government thugs dressed in funny costumes to make it look like it’s not your government who commits these crimes) attacks.

Now what comes on top of it is that this wold cup is extremely important for the volatile public mood in South Africa.
A success will boost morale and optimism in this country tremendously while a failure or a “terrorist incident” would have devastating effects.
Already years of preparation have gone into this and there are lingering fears of inadequacy, like we can’t pulll it off. A lot of that fuelled by foreign press writing extremely negatively about South Africa.

So, no wonder I had to declare the 10 FIFA (a somewhat odious organisation, but I still think soccer is a beautiful game when plaid well) stadiums prime targets for gifting.

Of course gigantic crowds in excitement, often collapsing into violence are also rich harvesting grounds of negative energies for our offworld parasite friends. We should not allow them to feed too richly here on this pretty blue orgone planet, should we?

Standard treatment I devised for these gathering bowls: 30 TBs and 4 Earth pipes kind of as corner posts. 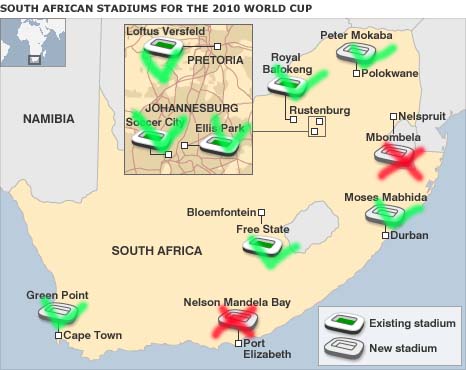 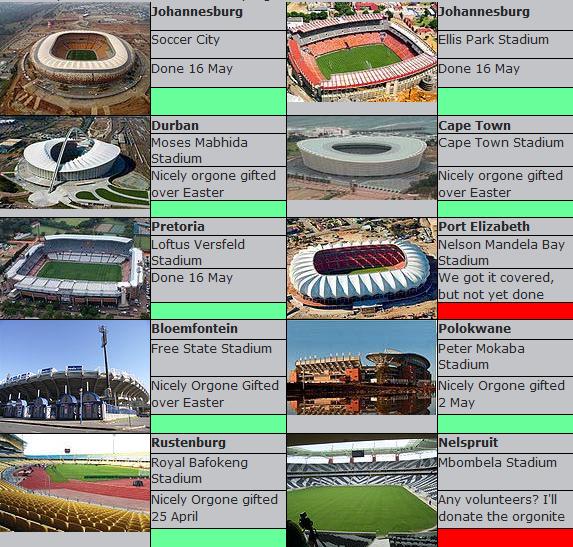 I’m actually quite keen to see a few games live and now it should be safe to do this. yippeee!

It is done, we can now enjoy a happy worldcup.
Check the movie below to get a feel of the vibe.

Some people don’t understand why I make such a fuss about this worldcup.
After all, it’s “bread and games” after old Roman recipe, isn’t it?
Sure was, and yet it was more.
It was the first tournament in the biggest sport on earth ever held in Africa.
The anxiety whether “we” could pull it off without major glitches was extreme.
The rumours of planned terrorist attacks as well.
The mood in South Africa was extremely volatile.
A well placed false flag attack could have derailed the country actually. And we are very sure the S-Birds had such plans.

And then: what a Worldcup it was!

Interestingly all the teams with the big ego players, like Spain, Italy, and France went out early.
Arrogance was punished nicely.
Teams that had a great team spirit fared very well.
The carnevalistic atmosphere was enjoyed by hundreds of thousands of visitors to the country and the whole thing ended on a very positive feelgood note.
We went to one of the games in Port Elizabeth (not without some serious water gifting on the way) and found the atmosphere very positive.