Today was a great day, Easter had good weather here in Belgium, and I had already planned a little gifting trip to Brussels for some time. A backpack with 120 TB’s, six bigger copper tubed orgonite pieces, and one big orgonite piece.

I wanted to bust the rumoured ‘beast’ supercomputer, and had a few hints on where to gift. I started out at the Atomium (where some people have claimed ‘the beast’ is located), surrounded it with three copper pipes and some TB’s, then continuing my way via the royal palace (several TB’s) to the other suspect location.

Another psychically identified gifting target turned out to be a electricity plant at the end of the ‘rue royale’, a straight road that stretches over several kilometers through Brussels. I love gifting important street plan targets, and did the most important points in the other long street, ‘rue de la loi’, (‘lawstreet’) as well. Thus a lot of important buildings got gifted, such as the belgian parliament, and the European parliament (the big piece of orgonite for that one).

But let me tell you about the other ‘beast’ location. I got bad vibes immediately after seeing the building, and it had some weird energy around it, not oppresive, unknown. It housed some computer firm, Belgacom (belgian telephone/internet- provider), and another company i forgot about. It was a three story building with one ar two antennas, nothing special, tinted windows, but it had an unusually big ‘energy/electricity’ building, more the size of something you would expect at a hospital. I got gifting, and my intuition wouldn’ t let me make lot of steps after the last buried TB. Three copper tube devices, and some 15TB’s were left on a small surface, never left so many orgonite in one place!

I did a cathedral and the ‘grote markt’ (central square) among other targets (churches, pilars, antennas,…. the lot).

I walked a LOT, and ended the day with still 20 TB’s left, but content with the job done. On the way home, I could see the Atomium, which looked great now. Only the ‘computer’ building did not give off good energy, but not bad vibes anymore either, strange, maybe it still needs more?

Ending the day with an hour of chatblast, this was one fine day indeed.

PS Don’t you just LOVE the timing, doing some good gifting on Easter!

Since I gifted Brussels, the capital of Belgium as you might know, there have been elections. At the moment there is a political crisis because they have difficulties forming a new government. One of the most hilarious moments of the last few weeks has been when the prime-minister-to-be started singing the french national anthem when asked to sing the country’s (belgium’s). I like to think the orgonite I put in that very spot (where he was street-interviewed) has something to do with his inability to stick to artificial national pride. Belgium is a country that has difficulties staying one nation because of the differences between the northern dutch-speaking and southern french-speaking parts. The ‘belgian’ king had to be imported from the UK at the country’s foundation in 1830-1831. I put some orgonite near the royal palace as well, and it seems this very symbol of the unity is now threathened.
cool

Great that you did that, Dirk. I think Brussels is a very important city. I was there a few times in the 80s. Most of the out of proportion buildings like the Koekelberg Cathedral (you did that one, or not?) were built, when the deadly and murderous exploitation of the Congo reached its peak and money gushed into the Belgian capital as fast as the blood gushed out of the truncated arms of the slain Congolese. (Whole tribes were exterminated when they did not deliver the required couchouk quotas. The soldiers had to bring one chopped off hand for every bullet that they spent. Because they often missed, hands were chopped off without shooting the guys first) It has an eerie feel, that city. On the othe hand it’s full of life, chaos and enjoyment. +NATO and a lot of EU-Top bureaucracy is there. Extremely bustworthy!
There used to be a few people in Belgium, that did some Orgone work. One is in Antwerp, a lady that I remember was in Brussels, but there’s not that much going on locally, compared to neighbouring countries it seems. Luckily, it’s not too far from Holland and you can eat very well there, hehe…
Georg

Koekelberg was done by someone else (saw itin a distance), luckily for it was not on my route 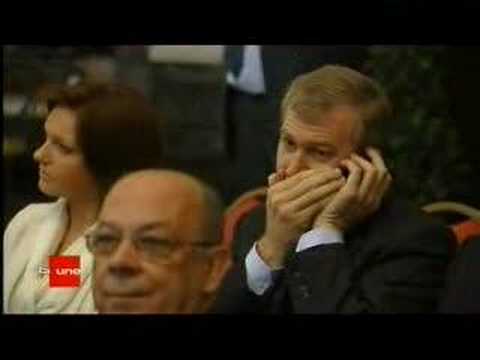 I decided to put up this link here. For those who don’t want to read the above messages: in april I busted important places in Brussels- Belgium’s capital (city centre, royal palace, monuments, churches- including and especially the one you will see in the film). In june there were elections, and there is still no new government, the very existence of the state of Belgium (with the artificially imported royal family- out of the UK- 1830’s) is now threathened. A great ‘coincidence’, but the best story you can see in the video above. On the occasion of Belgium’s national holiday on july 21st, the prime-minister-to-be had a little trouble sticking to his artificial politician-like confidence, and when asked to sing the country’s national song, he sings the “Marseillaise”, which is the french national anthem. Hilarious! First, he gives another wrong answer to a question on the historic meaning of the national holiday.

You will just love his facial expression, his unsure voice… one day they will all be like that, trying to stick hopelessly to their false authority, that will have gone by then.

For those who don’t know orgonite: the bad vibes that were created and misused with the construction of the cathedral, were turned around into good ones, because of a piece of orgonite I hid in the vicinity, and an ‘atmosphere of truth’ was thus created. How many people know his mistakes might very well have been hastened by the effects of orgonite? Enjoy!!

Today politics in Belgium was shaken to its core again. After failure of Yves Leterme- prime minister to be- to conclude the negociations to form a new government, an important symbolic proposal was voted by all the flemish parties. This might not seem a big thing, but trust me it is, ‘not seen in 40 years’. You might even hear about it on the news in your country. More and more people start to question the very existence of the artificial nation ‘belgium’, with its artificial royalty.
Most of the negociations took place in the political capital Brussels. Lots of important buildings got gifted by yours truly in april, and I also took care of the big energetic corruption of ‘lawstreet’. I gifted the ‘parc des nations’, close to the parliament that voted today (gifted as well). The royal palace was gifted as was the ‘Atomium’, one of the nations’ national symbols.

Funny how these dramatic changes in the subtle energy of Brussels seem to be followed by all these unusual political upheaval. I trust you saw the youtube film above, which shows clearly how polticians loose their ‘fundament’ in corrupted energy. The poor man in the movie is even honest at the end of the fragment, when asked if he was sure to have sung the right hymn: “je ne sais pas” (I don’t know"). Ouch! Being honest is bad for ones’ political career. Thanks, little towerbuster!
I imagine today the members of parliament, too, were able to act more ‘honestly’ (I admit that this is my point of view), in their newly created subtle atmosphere.
Anyway, big changes going on there after gifting key energetic points in Brussels, no one can ignore that.

I’m not living in Belgium anymore for a while now, but I do still read official newssites. I have not followed politics in detail, but the government resigned today for the umptied time in the last few years. I just recalled reading an article yesterday on the political situation that read someting like ‘1000 days of political uncertainty’.
The political heart of belgium lies in Brussels, an area covered by a few square kilometers housing the parliament, royal palace etc… You know when I gifted that area? You guessed it…… about 1000 days ago [Image Can Not Be Found] as you can read in the above post.

One of the major players on the scen is called Yves Leterme. If you haven’t read the above posts, please do, they accompany this youtube film deliciously, people that have already read it, will excuse me for repeating. The former prime minister sang the FRENCH national anthem on Belgium’s national TV when asked if he could sing a few lines of the National Anthem on the Belgian National Holiday a few years ago. You know what’s burried only meters away from where he’s standing? TB [Image Can Not Be Found]

I remember getting a helicopter visit for posting this thread, they don’t like people exposing how magic works in real life.

Haha I guess the 1st tv channel of france, tf1, solved the problem yesterday [Image Can Not Be Found]