Last weekend we decided to take the long route to the beach. Instead of going directly north-west we went on the highway that goes very close to the mountains(to the east) from Santiago to the town of “Los Andes” further north. We had noticed for a while that lots and lots of DOR seemed to be comming from that direction(north-east) into Santiago. We have also noticed that most of the HAARP asaults seemed to be coming from that direction. Javi was very insistant that we should go to that general area and check it out. About 50 kilometers into our drive, after busting a few towers on the way, we spotted a masive facility hosting huge parabolic dishes and some tall structures that looked like HAARP towers. We imediately became very exited, got off the high way and parked the car at the entrance of the facility. 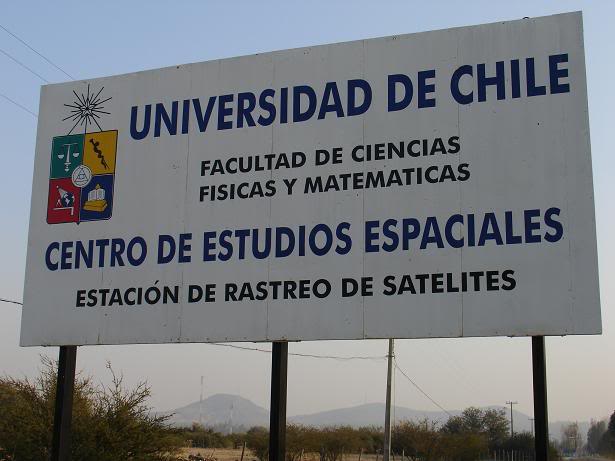 This is the sign at the entrance of the facility. It reads: “University of Chile, Faculty of Science, Physiscs and Mathematics, Center of Space Studies, Satelite Tracking Station” Notice the HAARP towers in the background, below the sign. 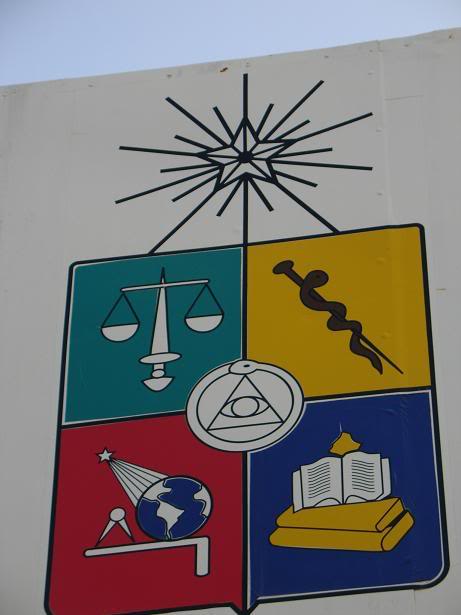 A closer look at the insignea of our national universtiy. This is so overloaded with masonic and illuminist symbols its actually insulting, the four pillars of domination: law, medicine, science and academia. I love how the law symbol has a dagger holding the scale. I won´t go into analizing all of this since its so blatantly clear. 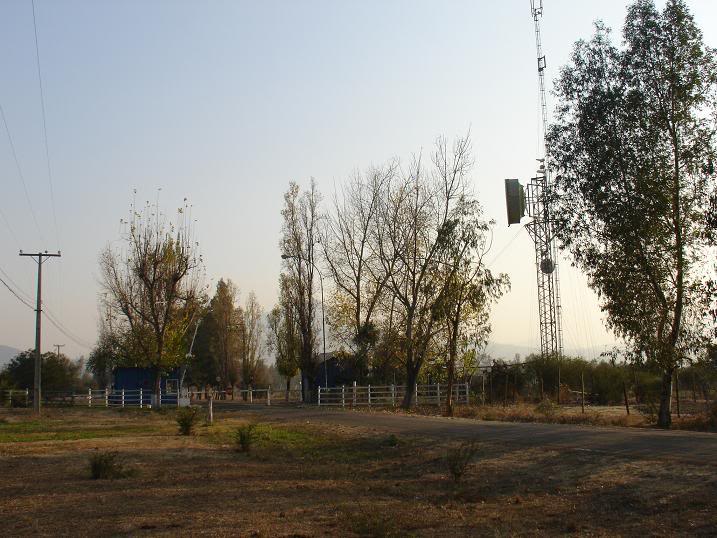 Gated entrance, sure, that big drum is for tracking satelites, yeah right! 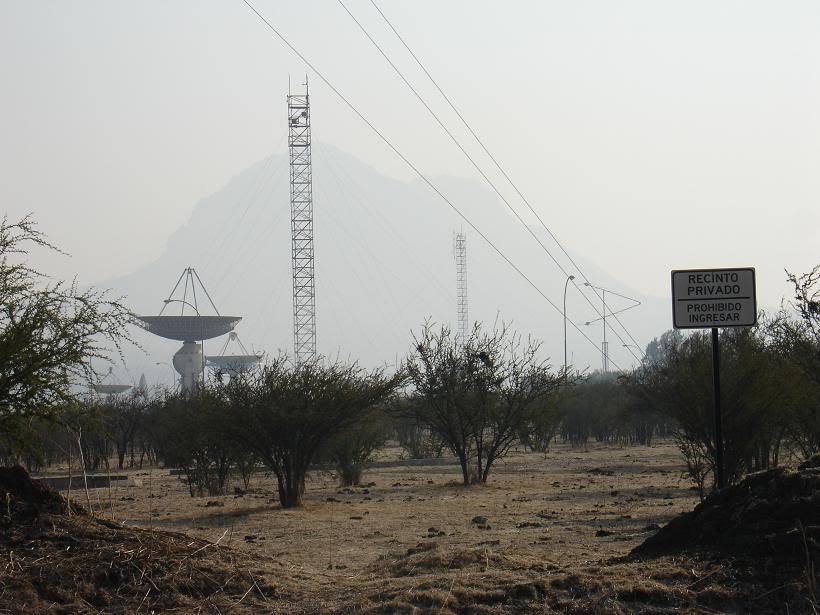 The antenas don´t look like typical HAARP, they had a dish at the top pointing horizontaly. I really have no clue what they are for, but the energy of the place was very, very, very nasty, I can´t enfasize this enough, Javi actually got sick from the DOR, felt like throwing up and had a big headache, she felt bad for a day afterwards. Notice the thick smog, and depressed vegetation.

Its supposed to be a satelite tracking station. I don´t doubt that lots of the dishes there are used for this purpose, but I think some of the stuff there was being used for other more sinister purposes. The place felt really nasty, and there was more smog here than in Santiago. 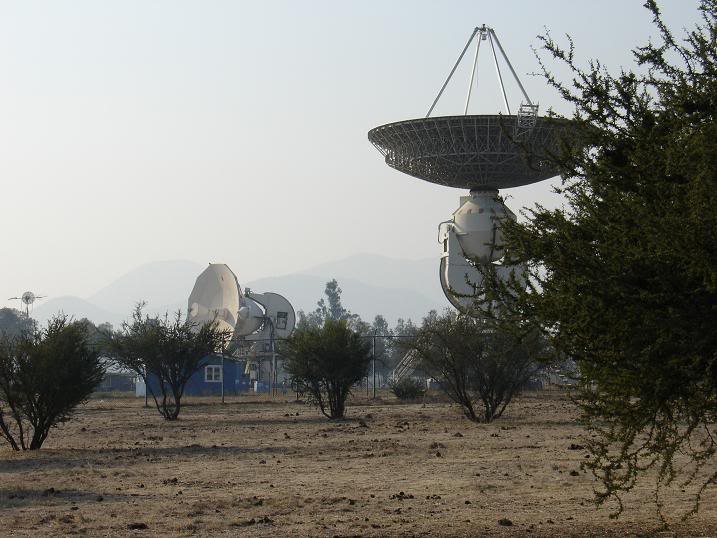 For some reason, both Javi and I got a really bad feeling from the smaller “dish” in the photo above. It was different from all the other, larger dishes. We actually saw it in operation, it was very agile for its size and obvious bulk. We also though it was wierd that it was never pointing upwards, always only slightly above the horizon while obviously in use. Also the cables comming of this thing were much more massive that the other larger dishes and the central rod also seemed kind of odd. I had the subjective impression that this machine could emmit energy as well as recieving it and it was designed to blend into the other equipment. 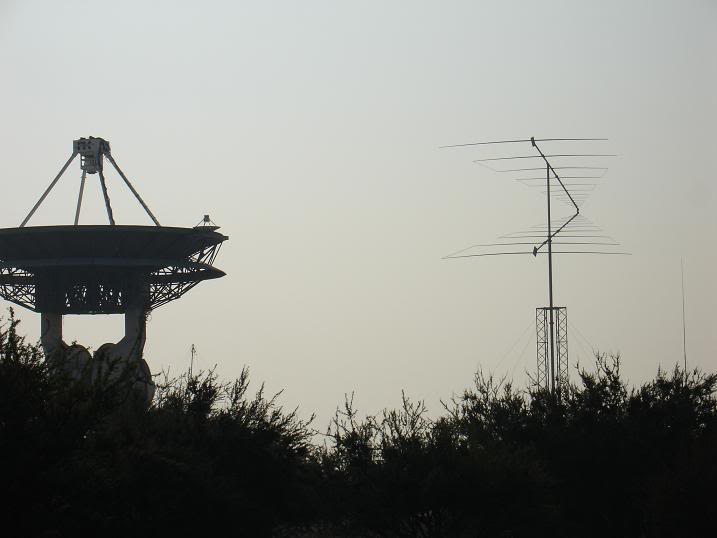 Now thats one wierd “antena” to the right, maybe its some sort of scalar wave device, who knows? Maybe its for getting a better TV reception 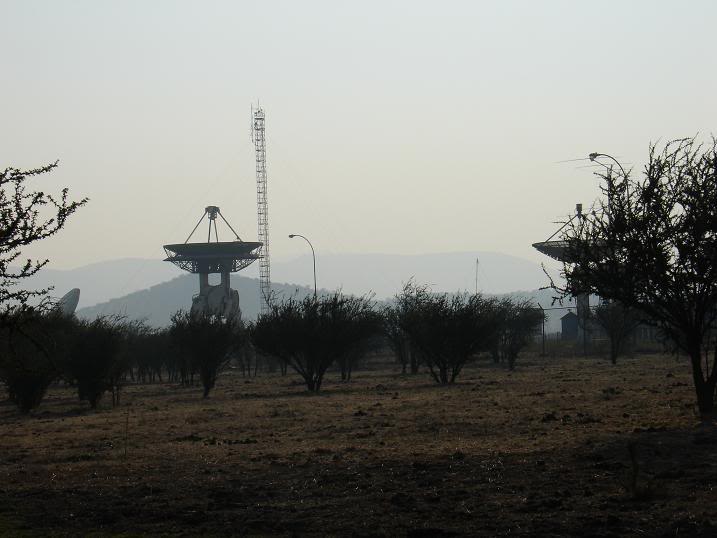 I think that this picture shows the energy of the place very clearly. As they say, one picture is worth a thousand words.

Well, needless to say, this place has been gifted, probably enough TBs to take care of this facility. We were on the grounds for about 2 hours, until a security guard dressed like Dr. Evil´s minions asked us to leave. We pretended to be just innocent turists taking pictures. " Didn´t you see the no trespasing signs, this is NASA property" he said. We replied: “We thought this was owned by the university” he said, “The univeristy administers, but NASA owns it”, thanks for the intel buddy! When we left the place we noticed there was a “Air Force special operacions” base and a military base right next to that, We´re gonna have to go back and gift those places as well, since Javi was too sick(from the DOR) to stay in the area that day.

good work, congratulations, would love to hear how gifting this faculty will or will not affect the weather in the region

Nasty dor-tech in the photos, you did good job my friends. I hope you have SP in use while approaching these places. Next time it should be easier to hang around after the gifting, but some EPs and Hhgs would add to the soup. I smell reps, too.

Blessing for your valuable work.

your smaller dish looks very familiar, I think I have seen one here in Hawai’i and I also got the impression it was shooting energy, perhaps the local residents with x-rays or something of that nature

great job Alejandro. You did some goodness in a place with heavy energies. I am sure there will be positif result.

Its been a while now since we gifted that nasty place and the results have been spectacular (or a spectacular coincidence) . Up untill the time we gifted these nasty HAARP towers, the meteorologists were predicting a very dry winter due to “la niña’s” (oppoiste of “el niño”) precence in the pacific. In Chile usually when there is “el niño” years(warmer than usual waters in the pacific), the winters are very wet with floods included, on the onther hand when the ocean is unusually cold “la niña” winters are dry. Only a few days after gifting this place we had our first real rains of the year, since then its been raining every week without interuption. Also the rains have been very well spaced apart with no flooding. Its been two months of rain, about twice a week. We´ve also had the coldest winter in 50 years with 3 separate days of snow in the city, when there is usually only one snow day, if that, a year, so much for global warming!. 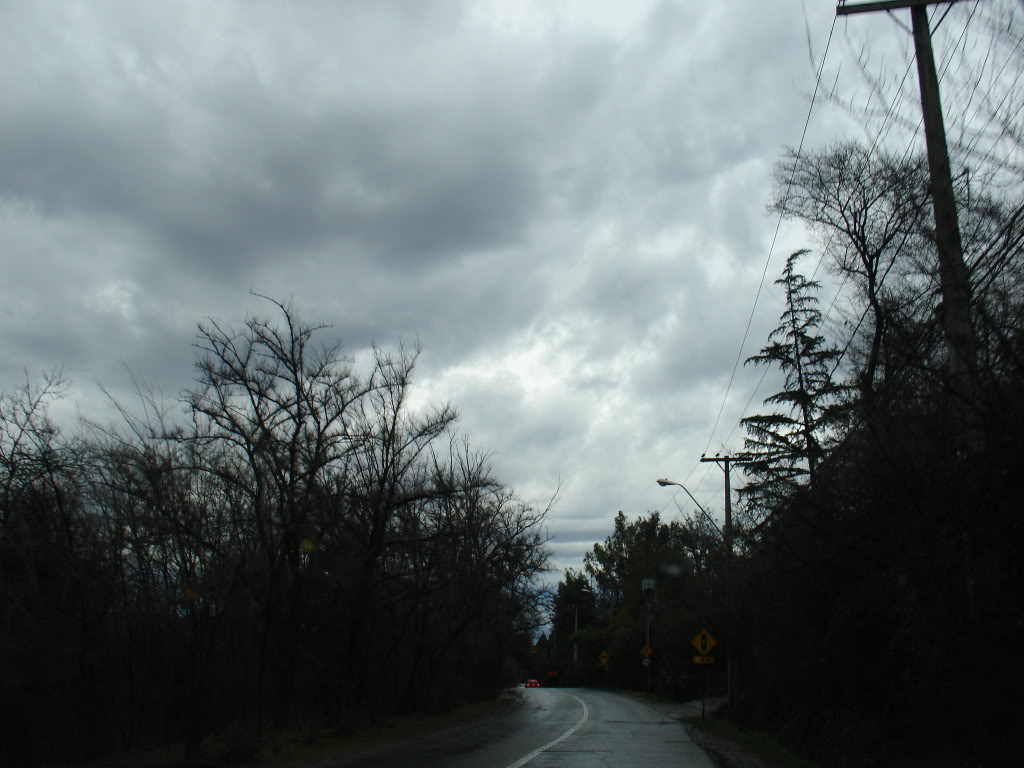 Also, last week we had the first chem-spraying directly over Santiago we have every seen. Are you rats becoming desperate? 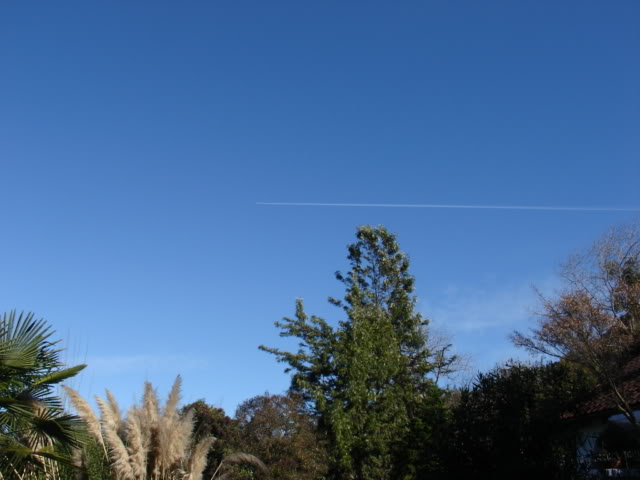 There are absolutely NO flight paths over this part of the city and I have never seen any jet planes flying in this area, except for military fighters during practice. 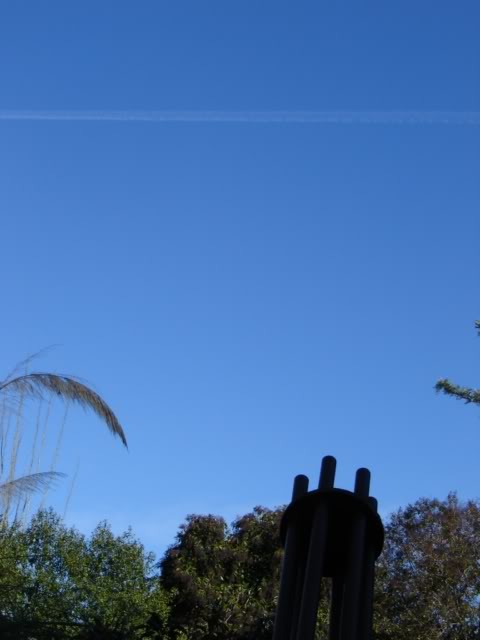 I pointed my cloudbuster at the spew and it lasted less than 5 minutes. This trail crossed the entire city, but only stuck around in the edges of the city, out of range of the cloudbusters about 60 miles to the south-east.

Its been really great all the rain we’ve had this year… specially when the the forecasts alarmed the population that we would have a dry winter, having to cut down on energy (save water to save electricity). It was cool watching the ski centers produce fake snow in order to be able to open on the official opening date… the day before, Santiago enjoyed prolonged rains in the city, and lots of snow in the mountains [Image Can Not Be Found]

Since that, it has even snowed twice down in the city.
These tb’s were placed high up in the mountains:
[Image Can Not Be Found]

Last night the “Center of Space Studies, Satellite Tracking Station” featured in the local news (tv). The report talked about this being the only station in Latin America that the NASA had installed (I believe in the 50’s) to track the satellites that cross over to the southern hemisphere… the report was meant to be flattering, presented it as a national pride, and said that our reputation was so high that the Chinese were planning to install stations like this one here in Chile too [Image Can Not Be Found]; . They also said that the station is crucial to the mission of the Endeavour, and it is active 24/7.
The images were quite different to the ones we presented in this thread, clean airs, clear images, you can even see the snowy mountains in the back… please watch the video on the following link: [Trasbordador Endeavour es monitoreado desde Chile/url:1ddfs6w3 Here is a direct link to the video, to view you need real player, just click on the R logo and then on “play in real player” if not you’ll only get the audio : [ram]http://teletrece.canal13.cl/cgi-tele13/video-smil.pl?a=2&url1=rtsp://callisto.unete.cl/canal13/disco2/cortina_teletrece.rm&url2=http://callisto.unete.cl:8080/ramgen/canal13/disco14/cdn/ago/2007/14/t13_0814_nasa_chile.rm[/ram]

now, the pristine skies can be a result of the resent rains of course, but we are happy with the fact that it has rained! [Image Can Not Be Found];