John asked me to post the following progress report for the sake of our Chinese readers. Alejandro, our intrepid site administrador, is off ‘misbehaving’ along with Laozu Kelly for a few days but when he gets back here I think he’s going to log some more hours repairing the forum. It’s possible that the CIA swarm got in through my administrative connection (their Christmas present to all of us, I suppose [Image Can Not Be Found] ) after finally discerning my clever password.

Thanks for keeping me informed. I just tried posting an update and I’m still blocked as a “spammer” on EW. So if you could post the below update for me that would be much appreciated. I’ve put all the photos in Flickr (thanks Eric good tip) so the links to the photos should work if you copy and paste the text below. I’ll also do the same with my China-TB site as it is hacked again…

All the best…Hong Kong John

This posting is for the folks in China, where there are some very smog filled, DOR-infested cities. Hong Kong is one of them, but I think youâ€™ll find it inspiring to see the transformation taking place in Hong Kong.

This photo below was a common occurrence of smog in â€œAsiaâ€™s World City.â€? 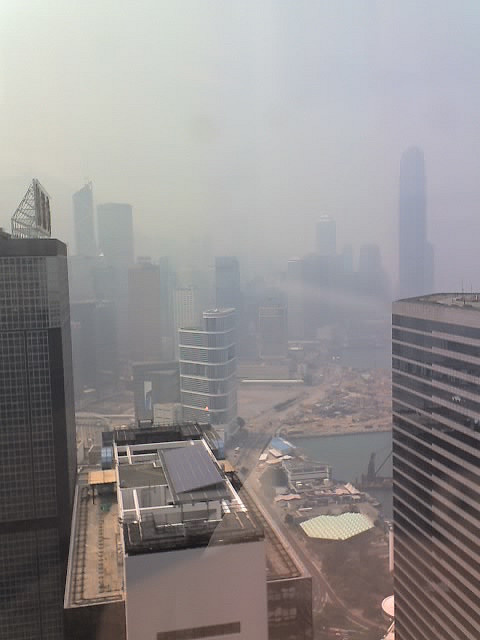 Then a few years back a fellow named Didier started gifting the city with well over 500 TBâ€™s. I followed later with perhaps an equal number of TBâ€™s. We both have CBâ€™s as well. Here are some photos of what we experience more and more in Hong Kong skies since gifting. 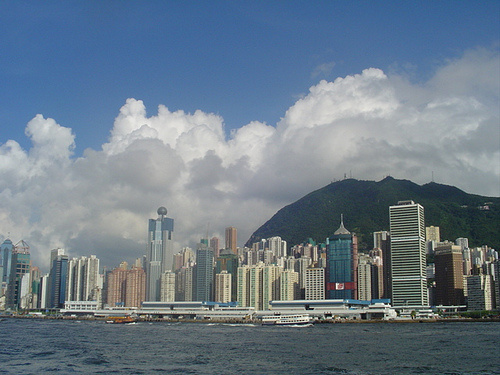 Certainly the days are not always clear like this, just as they are not as smoggy as the first photoâ€¦ BUT the atmosphere is improving in my experience. 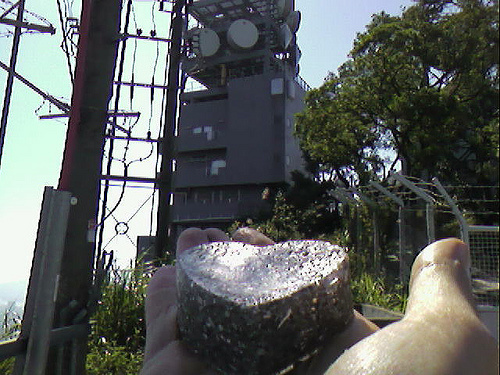 Last Sunday I was out gifting Hong Kong on my motorcycle and the most beautiful sylphs appeared over the city core that I have ever seen. Keep in mind that Iâ€™ve seen some lovely sylphs in Thailand and Canada while gifting. But these were the most energetic Iâ€™ve ever encountered. Right over one of the most densely populated urban areas in the world (Wan Chai â€“ Hong Kong). I sure hope my cheap cell-phone camera does them justice. 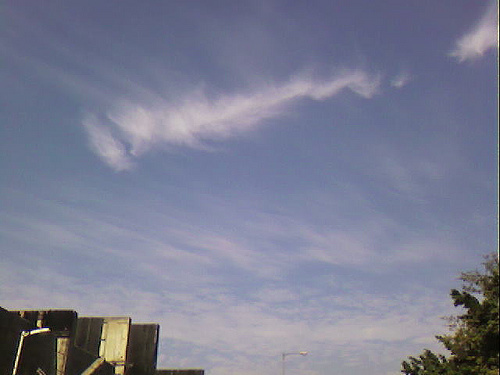 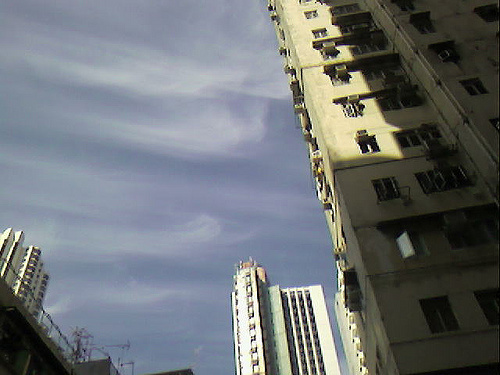 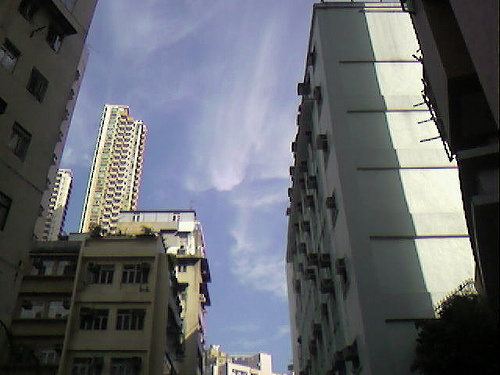 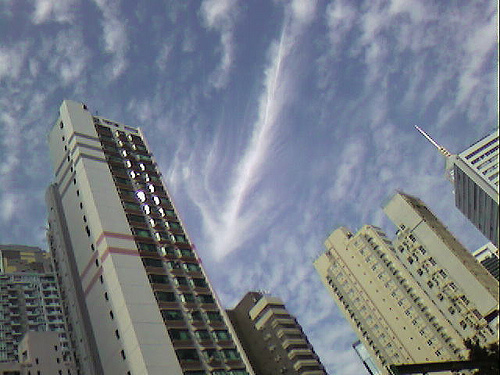 I feel we are making great progress here in Hong Kong and itâ€™s the place where I feel will open an etheric crack for more gifters in Mainland China. I was recently on a gifting trip to Hainan Island, China (the Hawaii of China). I focused on the capitol city of Haikou where many of the hot springs flow and this often indicates the existence of a vortex or two. The place was jam packed with DOR, distorted vortices and there was PLENTY of electronic mind-control weaponry to gift. The day I started gifting, it poured rain and continued for the whole time I was there (so much for getting a tan at the beachâ€¦gifting does have its disadvantages at times). This was a bit odd for the â€œdry seasonâ€? and could be a result of the released DOR in the atmosphere.

I returned through Shenzen, China and felt an immediate energetic difference between Hong Kong and Mainland China. I realized though, that there is still more gifting to be done in the New Territories of Hong Kong bordering Shenzen. I plan to do another motorcycle gifting run this weekend toward the borderâ€¦then later next month turn my attention to gifting Shenzen in China (Shenzen is quite DOR-soaked). I feel this will open the etheric crack even more.

Oh yes. While on my motorcycle gifting-run, sitting at a red light â€“ the most beautiful butterfly landed beside me and waited for the longest time, then took off just before the light was green. For me this is something worth noting and it made my heart smile. Ya sure there were low flying chemtrail jets, in the last little while, low flying helicopters and etheric harassment, along with a guy in a red Ferrari trying to run me over (license plate LI-TRIAD) but they were all insignificant compared to that butterfly and all of the beautiful protection and guidance Iâ€™ve received from the â€œOperatorsâ€? (whoever they are) and human boosting crew. Clearly in my experience, The Operators run the show yet it helps them a LOT, I think, if we ask for help.

Two other points worth noting: Iâ€™ve found water gifting to be quite powerful and since there are many islands that make up Hong Kong, a lot of orgonite has been tossed in the sea. Iâ€™ve also received a great deal of feedback from the atmosphere when gifting heavily populated areas where the vibe is quite negative (Mongkok and Wan Chai come to mind). Plenty of etheric parasites reside in these locales and itâ€™s quite fascinating to see and feel their darkness getting flipped into something more pristine.

Instructions for making a TB in Chinese are posted here:

All the bestâ€¦Hong Kong John

P.S. The next Don and Carol Croft are Chineseâ€¦maybe Don Wong?! [Image Can Not Be Found]

Great work you (and Didier?) are doing there.

That’s what the skies used to look like when I first set eyes on Hong Kong about 25 years ago (the skyline has changed a bit though).

Good to see that the etheric balance of the region is in such good hands now.

Thx, Dan–I understand that even beautiful Bali’s atmosphere had been turned into a DOR hell, not very long before you got this work started, there. The CIA and MI6 (the only terrorist organizations on the planet) even committed a false flag attack in Bali, which some say involved a dirty military bomb.

If it’s possible for us to explore how your good work may be restoring the tourist trade since the time of that bombing, which essentially destroyed tourism in Bali (if I’m not mistaken) then maybe we can tie that into how the present pristine ambience and skies, which clearly resulted from your efforts, contributed to the revival.

Many of us are making genuine history with our systematic gifting, which is why the terrorist agencies have routinely destroyed this forum since its inception. That reminds me that we need to set up a mirror site ASAP [Image Can Not Be Found]

Thanks, again, to everyone here for posting reports on your orgonite-tossing achievements! Without Etheric Warriors there would literally be no record at all (in English) of our accomplishments and of course this is all merely representative of what a lot more people are doing around the world with orgonite. Quite a lot of skilled psychics are hunting and ‘balancing’ the corporate/gov’t/military predators, too, of course. Our psychics are the only ones, for now, who are submitting reports for the record.

Here’s another note from John:

Don, Thanks for posting. Mucho appreciated. The China-TB site is back up. It really is a great pleasure to be gifting and boosting. Reclaiming our planet. I’m off to Thailand soon, so I’ll put something together from that adventure as well.

Hong kong john wong… [Image Can Not Be Found]