How About a Return Engagement with the Dolphins of Mombassa?

Last spring, two of our Kenyan cohorts, David Ochieng and Mrs Odondi, along with their immediate families, travelled to Mombassa in order to give orgonite to the dolphins from a hired fishing boat and I bet you were as thrilled as we were by David’s firsthand account.

Right after that, the US Navy slaughtered hundreds of dolphins with sonar weaponry near that spot and we went after the culprits in the next chat session and exacted some reprisals, with the help of some whales, or rather we helped the dolphins and whales do so.

I thought it would be fitting for our Kenyan friends to return with even more gifts and to spend more time distributing orgonite off the coast near Mombassa because their visit marked the return of the dolphins to that area, which astonished the fishermen whose boat David had chartered.

David Slinger was the first to gift that area and he left two orgonite cloudbusters there before he moved back to New Zealand a few years ago. David owned the ‘Dolphin Dhow’ and for several years he and his wife and Kenyan crew had been taking tourists to meet and swim with the dolphins but the dolphins had pretty much abandoned that area, so the Slingers, too, eventually left and are now earning their livlihood by selling their orgonite creations to stores in New Zealand. Carol visited Mombassa’s colorful reef with her African friends in one of those magnificent, arab-style sailing dhows, five years ago.<br />

Carol, Jeff and I went out on weekly gifting sorties in the sea around South Florida for about a year and we most often came in contact with dolphins but we only had three dolphin experiences that were as dramatic and personal as the one the Africans had during their short visit to Mombassa, which is even more remarkable when you consider that the dolphins hadn’t been seen by anyone in the Mombassa area for several years before that…

Mrs O’s son, Billy, who is enrolled in a boarding school, had to wait for a school holiday in order to participate and so they set a tentative date for then, pending the gatheing of funds. The rest of us pooled the five hundred or so dollars that young David estimated would be required and he did a masterful job facilitating transportation, lodging and meals, as well as negotiating for the boat. YOu no doubt had the feeling that you were with them, as I did, while reading his insightful and detailed report.

These two would like to return to Mombassa and would like to take along Salva Kirr (of Sudan) and his family and Judy Lubulwa and hers during the Christmas school holiday. I’m sure they’d be thrillled if Doc Kayiwa and his bride could come along, too.

So, this is my formal request for donations to David for the upcoming reunion with the bottlenose dolphins of Mombassa’s coast, who were very pleased to meet these wonderful folks last spring and will no doubt celebrate their return by distributing their orgonite to disable the US Navy’s death transmitters on the region’s seabed and heal some distorted vortices.

As you can see with Doc Kayiwa’s, Judy’s and David’s reports, our African cohorts are breaking new ground with gifting and I want to see this extend into the sea in the form of new alliances with the dolphins, don’t you? Also, you may have experienced heightened commitment and creativity by networking with our fellow gifters in 3D and in the case of the Africans this is even more significant because some of them are physically threatened on account of this work.

Mrs Odondi, for instance, after initiating her gifting career, was shot and hospitalized and her house and livlihood were later destroyed by a anomalous flood.

Doc Kayiwa is in harm’s way this week while gifting a battlefield from a Sudanese Army helicopter and convoy.

Judy has faced down Nairobi police/kidnappers, her business was nearly destroyed by MI6 operatives, the CIA has paid for regular African sorcery assaults on her and she has lately travelled to gift the region’s sorcery capital at tremendous personal risk.

David’s small child has been attacked by sorcerers several times on account of David’s gifting and networking successes.

Not least, Georg Ritschl, who might, by now, be considered an African and our brave Austrian cohort, Axel, were brutally jailed for ten daysÂ at the behest of Presdent Mugabe for 'littering.'Â We consider their sudden release, which happened right after a Sunday chat session dedicated to them, to be nearly miraculous.<br />

Salva’s the only one who hasn’t been attacked but of course the CIA/MI6-sponsored insurgents in Southern Sudan had slaughtered several of his family members right in front of him before he contacted us.

<br />If you want to donate to this potentially dramatic expedition, please send it directly to David but bear in mind that the mail takes over a month and foreign checks and money orders are problematic, nor does he have access to PayPal or credit card donations.

That leaves MoneyGram and Western Union and you can wire any amount to David Ochieng, of Migori, Kenya, then email the transaction’s confirmation number and test question/answer to [email protected]

Moneygram is cheaper than Western Union to use for larger transactions, which won’t excede $10 for the transaction. MOneygram’s also a lot faster to process. 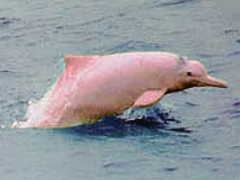 Dolphins come in pink too! First time i ever saw this.

I also watched the video. The commentary said that the fishermen and dolphins first argueed with eachother, but now that the locals are friends with the dolphins, all sails well. The brazilian government even pays for the food the dolphins eat. The boy in the video, i like him verymuch… It reminds me of the video “city of god” which was about the gang wars in brazil. Just a few days ago, me and a friend went to a place also called city of god, to watch the stars… i wonder, when we will have new ones…

Anyway, have fun watching the video!