“It is only prudent never to place complete confidence in that by which we have even once been deceived.”

Positive Changes That Are Occurring
JeffMiller (Jeffrey Miller) August 21, 2020, 4:21pm #1
“It is only prudent never to place complete confidence in that by which we have even once been deceived.”

― From "Meditations on First Philosophy", by René Descartes, 1641


"Although generally regarded as the man who first swept to power (in 1922) as the savior of his country from communism, this book shows that, on the contrary, while communism was almost no threat at this time, by 1945, as a direct result of Mussolini's reign, communism was set to spread rapidly in Europe, because he deliberately chose to turn Italy into a 'social minefield' primed to explode after his death, should he be defeated.

It is (next to the history of the Third Reich) the most extraordinary case-study of a man whose skill was in building myths about himself and his movement that convinced not just a whole country but the international governments of his day. He had a brilliant and monumental talent for deceit, which he exercised so effectively that he eventually fell victim to it himself, fooled by his own propaganda into entering a war his country could only lose, in a terrible way."

Hitler was a British agent, who set up and knocked down the German people with the "Make Germany Great Again" ruse. Mussolini did the same.

The rubes ate it up then, and continue to now.

But all that aside, it's August 2020, and great positive changes are underway at every level of our reality. They began in earnest in 2012, and have been increasing in speed and magnitude. I've been writing articles on the subject since 2013.

These changes are being driven by the collective influence of untold thousands of inexpensive Orgonite devices based on Wilhelm Reich's work.

Since Don Croft first fabricated tactical Orgonite in 2000, its widespread, ongoing and ever-increasing distribution has been collectively unknitting and transforming the ancient Death energy matrix built and expanded by our dark masters, well, all the way back to Babylon and before. And, as a result, the Ether is returning to its natural state of health and vitality.

One of these changes is fish growing larger than they ever have in history.

The article continues: "Gene Schmitt, of LaGrange, probably has the coronavirus to thank for his name being placed in the West Point Lake records chart. He caught a 41-lb. flathead at 12:05 a.m. on Tuesday, May 5, an hour when he’d normally be in bed resting for work."

"They were downlining a combination of live bream, chicken liver and cut shad. As the evening wore on, the fishing improved. 'We caught four nice-sized gar, and my brother caught his personal best 9-lb. striper,' said Gene. 'I told my brother, ‘You just caught that 9-pounder, think about catching the lake record that weighs 36 pounds, think about reeling that in.’ We were using the old cinder-block-anchor technique, and that 9-pounder pulled us off both anchors.' ”

The author has used the most devious method possible to say that the previous lake record was 36 pounds. Agent Gill says that catching the largest flathead catfish in the lake's history was merely an "improvement" in the fishing.

You may have notice that the author omitted mention of the far more impactful percentage between the records. So, I had to do the math.

The current West Point lake, Georgia record flathead catfish, from 2020, weighed 41 pounds, and was 14% larger than the previous 36 pound record holder. The date of the previous record can't be obtained from the article because the author omitted it.

Such records are usually broken by tiny margins, as organisms grow in progressively smaller increments as they approach their maximum possible size.

There's clearly been some huge positive change in the environment of West Point lake in Georgia.

That change is energetic, Etheric. The size, fertility and longevity of any organism vary directly with the health of its Etheric environment. 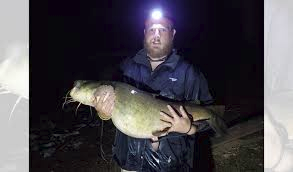