During the summer I met a lady who suffered from leukemia. She told me she had tried by all means to get well, going from mecanistic medicine to mystical medicine. She had tried bach flowers, mud solutions, stone massages, a therapy with water, shamans, magnet therapy, and the list goes on. On June of 2006 she underwent chemo"therapy", through a pill called “leukeran”.

When I met her, she said she was enjoing her last vacations before going into chemo"therapy" again… the doctor had said that the number of leucocites was extremely high and rising. She had decided to do the chemo again since she saw it as the only option left (also the doctor and her partner were very insitant on it). I told Paula that she should try just one more thing. I told her she should ask her doctor for one more month, in which she should follow the therapy I gave her rigorously: zapper every night all night long; a bottle of Dr. Von Peter’s “Chembuster”, which is great for the liver, kidneys and spleen (her spleen was very very big); a set of chakra buttons to use for at least half hour every night; and a pendant (heart chakra stones) to use all day long over her heart chakra.

She agreed to do it, so I inmediately ordered the zapper and chembuster from Don, and made her orgontie devices. I put special emphasis on her heart chakra, sacral and solar plexus… she had deep sorrows (which I think are the ultimate reason of her disease), that’s why heart chakra; she needed to be able to take in all the life energy she could, and store it, that’s why sacral chakra (for women); she needed to stimulate all her abdominal cavity organs, that’s why solar plexus. I also explained to her she should take an etheric shower regularly, letting all her chakras be cleaned and stimulated with golden light. I put a piece of gold on her crown chakra button as well.

One month of treatment and the date for her exams came. She took them and went to see the doctor. The doctor was amazed, and so were we! The number of leucocites had decreased by 40,000 per ml of blood! The doctor said she no longer needed chimiotherapy, and that she should go and see him with new exams in three months.

Here are the exam results going from August to March
August:

March (this is after one month of the zapper/orgonite/homeoherbals therapy): 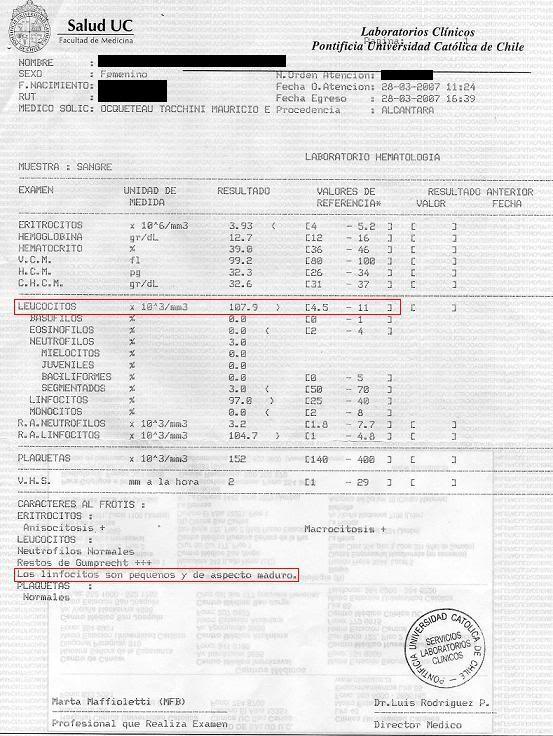 The leucocites are now in 107,000, which is still very high(a healthy person usually does not have more than 10,000/mL), but shows a dramatic decrease and change of trend. Now, note that the observations say that the “linfocites are small and of a mature aspect”… Linfocites in a healthy person make up 25-40% of the leucocites in this case they are 97%!, they can live a long time(years even), so this means that the ones that are still present in Paula’s organism are old… no more have been produced.

So we are eagerly waiting for the next set of exams, which promise to be even more dramatic than the last one.

Paula also feels very good, she is very active and high spirited. Please forgive me since I’ve censured her whole name, for reasons of privacy. I’ll keep you informed of any news, and of course I’ll post the next exams…

Just in case she wants to try chemo (the doctor would say that, he is an allopath)

They claim to cure it with chemo but 4 out of 5 adults die of leukemia after allopathic therapy, on their figures, and that is only 5 year survival.

These are the typical therapies that you only see in the media when they want to rubbish alt med: bach flowers, mud solutions, stone massages, a therapy with water, shamans, magnet therapy etc. In fact we had one very famous media lady who never found the 30 or 40 decent therapies available ie none of these ones
http://www.whale.to/cancer/therapies.html
(Dr Bruess found it easy to cure) but only managed to find these sort, almost as if she had a covert death wish, that materialised of course, as she went with the chemo as well.