We had lost a 400usd package heading for Italy. It was not the first time a package got lost or mangled with (on one occasion we also had several items missing from a package), but this one was a special case since it was a big order. Four months passed and nothing, I was beginning to loose hope and started the burocratic steps to get the money of the insurance back, which is never what you invest, and it would take probably another two months… this would not look good to our clients… it was then when Don urged us to join the mid week chat sessions to take care of problems such as these, and one night we boosted this package. The psychics saw it stuck, not destroyed, but detained at some point. We worked on it and the fellows who were interfering with it were appropriately dealt with. The psychics erased the â€œstationedâ€? sign over it, and it was free to move. I wrote to our Italian client asking for a daily boost, which I also did for a week and a halfâ€¦
The package arrived four days ago! Now, it arrived in very peculiar conditionsâ€¦ several items had been mangled with, but what really surprised us was that an HHG had a hole drilled into itâ€¦ what was anyone exactly looking for in there? Drugs? A bomb? It seemed more like something a humiliated little bully would do out of spite for getting his/her butt kicked.
Our customer asked us if the orgonite had been corrupted, we think not, except for that drilled HHG that might have a broken crystalâ€¦ feedback would be great from any energy sensitive!
Here are some pics: 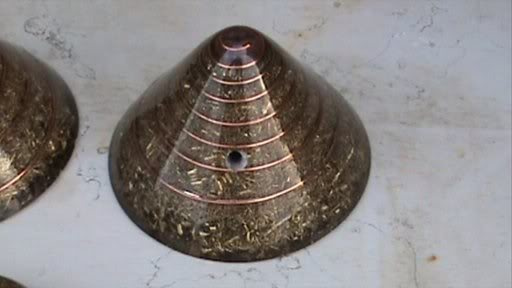 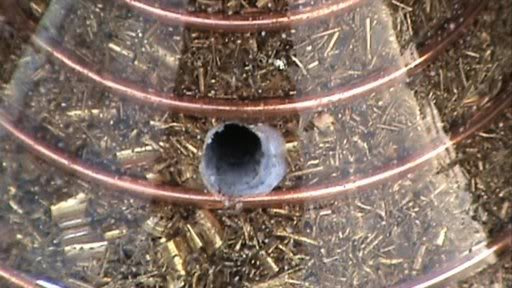 anything wrong with this one? Is it possible to corrupt orgonite without physically messing with it? The qi in the hole of the HHg does not feel good.

I suspect that the other one has not changed, though I cannot be sure since I don’t have a “before” photo.

I couldn’t sleep and began to think of a probable reason for the hole being drilled in the device and I think I may have the answer. Drugs. It’s possible a small container surrounded by fiberglass resin could possibly get through some security efforts. The smell from the resin might mask the smell from the drugs. What they don’t know, is the overwhelming majority of people who make beautiful devices such as the ones shown in the photographs have transcended the desire to have anything to do with drugs. But some people involved in drugs would try anything to continue their thoughtless deeds. I hope this incident remains isolated and does not spread world wide.

You all do wonderful work and make extraordinary works of art.

God bless you all,