For the shylps I keep forgetting the camera, will post them later, they Shylphs have installed at the motorway ringroad entrance of Noverasco, near the jailhouse of Opera at the South. There are interesting places on this road, they shylph tend to be about the area called Mirasole. Past the jail house, there is a elderly home, next the cop shop, a small village with the American School and golf course.

Half way from the city border there is a interesting area which main prominent feature is the ‘European Oncology Insitute’, attached a small strange lake with pipes poking out, a horses hoouse, a disrput church next to a XIII century castle used for weddings, a fishing lake, and also WTF what you see in the image. Also past the horses center and the castle there is a fishing lake. I think I spent a good bunch of HHGs all along this stretch…

Also discovering this area is parallel to the Cisercencians abbey of Chiaravalle, And also as a typical presumption, the horizontal coordinates place this spot of the Castle /Oncology insitute on the same line as the Lido of Venice, the Brescia city Airport and the Nato warheads airport of Ghedi, Vercelli, the lake Viverone and a mountain near the border of France next the artificial lake on the river Orco on the Italian border built in the Fascio era.

Also opposite the Oncology institute a place that is labelled ‘Center for palliative cures’ owned by the university. Many logos.

Just to spit it out, for me feels like agenda 21 + aliens with the death worship provided by the oncology insitute with the ads of funeral homes and their ugly birds logo. There is a chance Mirasole is a a kind of vortex, the spew planes can never get it to white-out.

Further up toward town, there is something also with the '60 church of Fatima, and and her older sister Chiesa dell’assunta.

Any comment or impression about this image are welcomed. Cherio 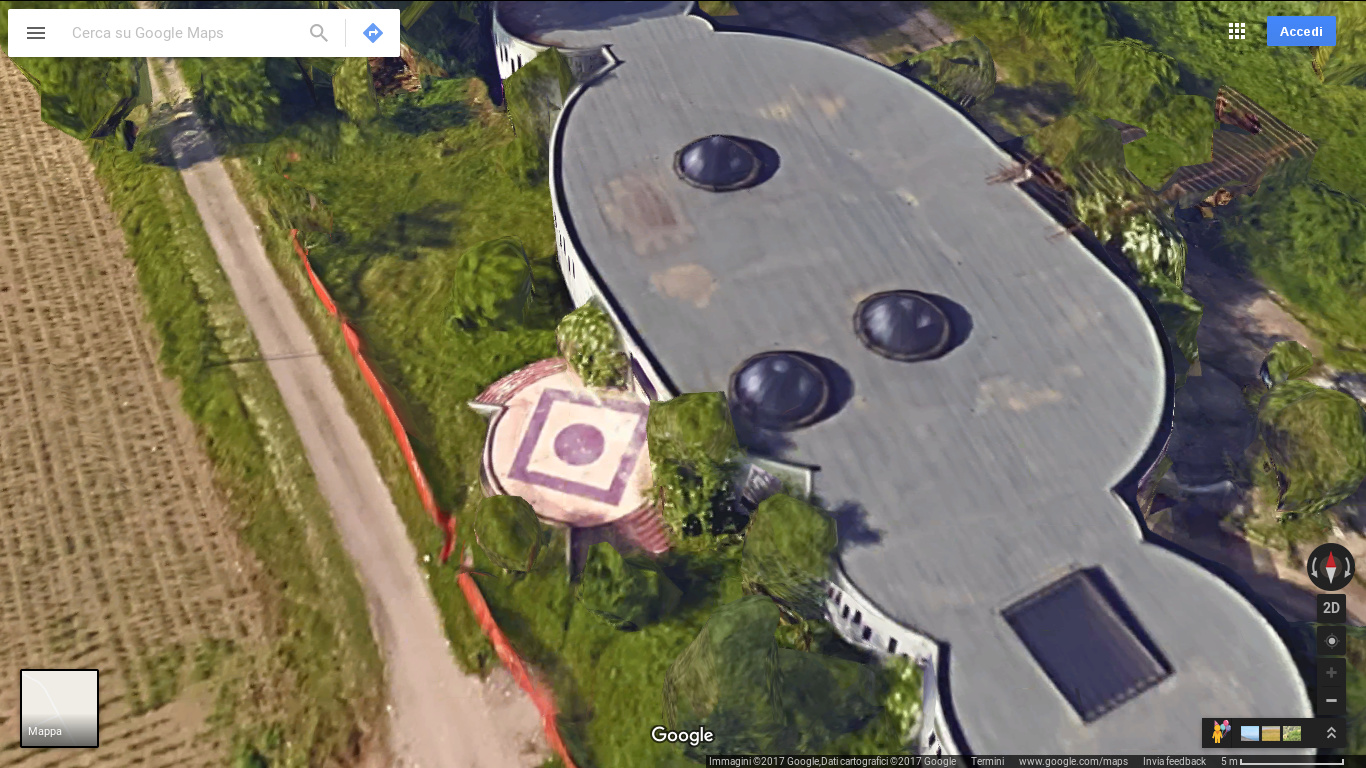 Havent felt a tb for months, but this morning suddenly they were in the mail. Did a diversion to another place also in the South where a river crosses under the canal where there is a bridge, by chance found in that spot the memorial of 3 partisans from the 113th Garibaldi. Did the water with 2 kilotons.

They partisan (not in vain) names are called Fantini, Paghini, Bernori.

Guyz a war with with an occupant and also a civil war are tough, if you have to split US of Arcadia do it now rather than later start finding out you have a tiranny with weapons of mass destruction!

Steered back to the Mirasole with the tbs, the shylps was there magnified between the prison and the bridge and the mall.

Is Catalan the new black?

All parties agree no need to give away to the counter intel, so the shylphs didn’t engage. The images are from the tiny burg called Quintosole, which is just before the jail house for reference. Is made of couple of streets with old houses beyond the stage of a good bargain, and another couple of streets with normal houses. Apart from 2 hostaria, the other feature of the village, sorrounded by golden weath fields, is the church and I was curious to see how it looks, before to enter I left a couple of tbs in some ruins. I think uchawis like outskirts.

There are two churches, the small one is not visible from far and is probably the oldest, the other annex has a bell tower, in the garden there is a small memorial, with a painting of a war scene, a man is carried by to comrades, and the name of reall soldiers under, they are from the World War I. If an army do not take care of his fallen soldiers and also respect the same related activities carried out by the other party is not an army it is barbaric.

This is because the sacrifice and the discipline are based upon principles and by people that have links and family lineage to some degrees, not like nercenaries. (There are also two men below they have civil clothes which look from the next war, it says they died for freedom, it may signified they were combacting the nazis).

There is a statue of the madonna next to the memorial and her hands are missing, also some part of the nose, The red roses on the pillare are made in plastic tied with a red ribbon.

From outside the main feature is the two angels on each side, both have an arm raised, In the midde there is a cross.

Above the door there is a print with a painting, and is a about Pentecoste, This painting also does a clear disambiguation between the representation of the Mother of Jesus and Mary Magdalene. The Madonna is red but it has the blu mantle, in Lombardy sometimes they used to paint the stars on the inside of the blue mantle of the Madonna. Mary Magdalene wears red too, both it has not a veil over the head, the hair is visible and openly flowing down to the shoulders, she is positioned behind the Mother of Jesus. 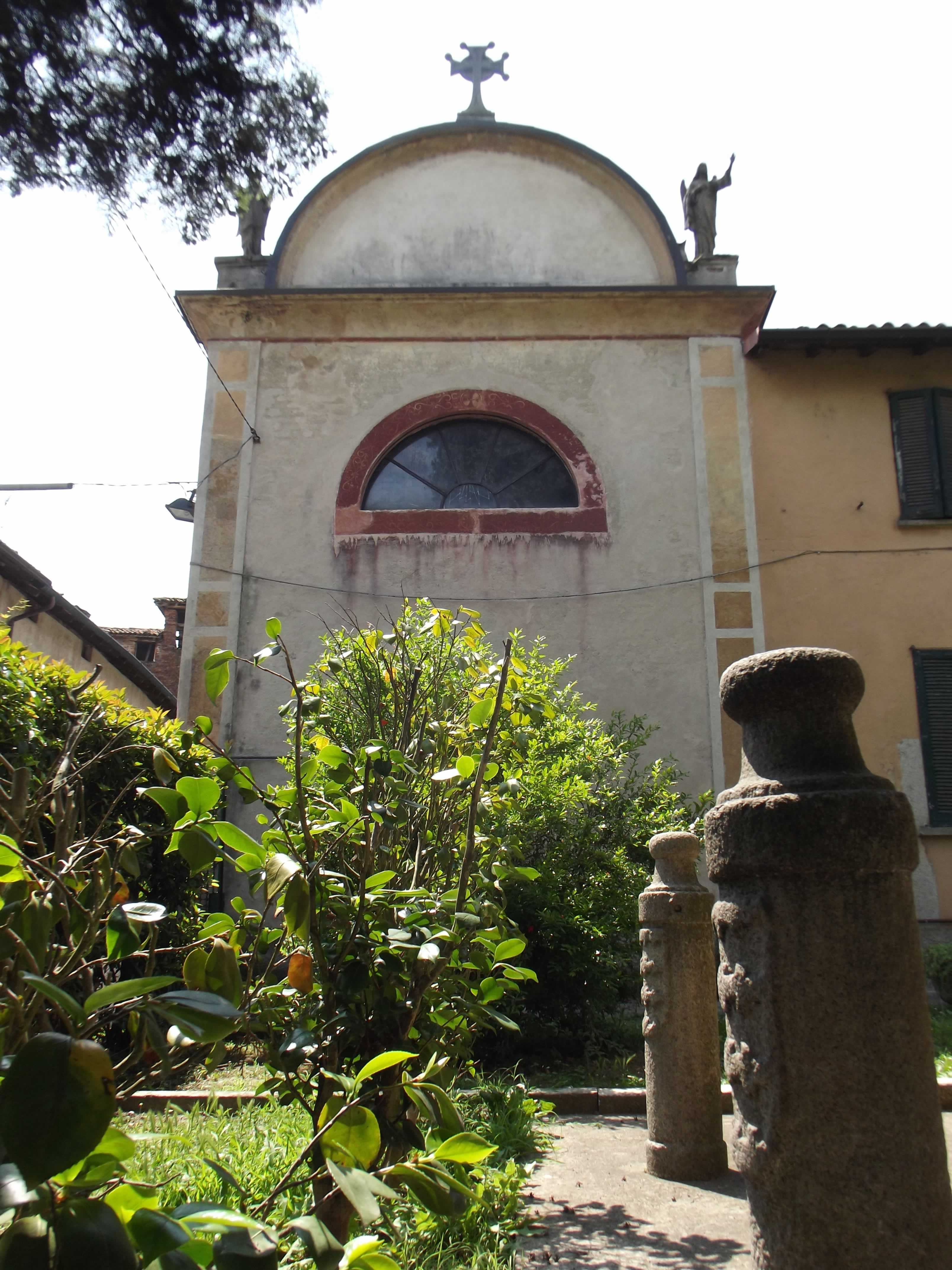 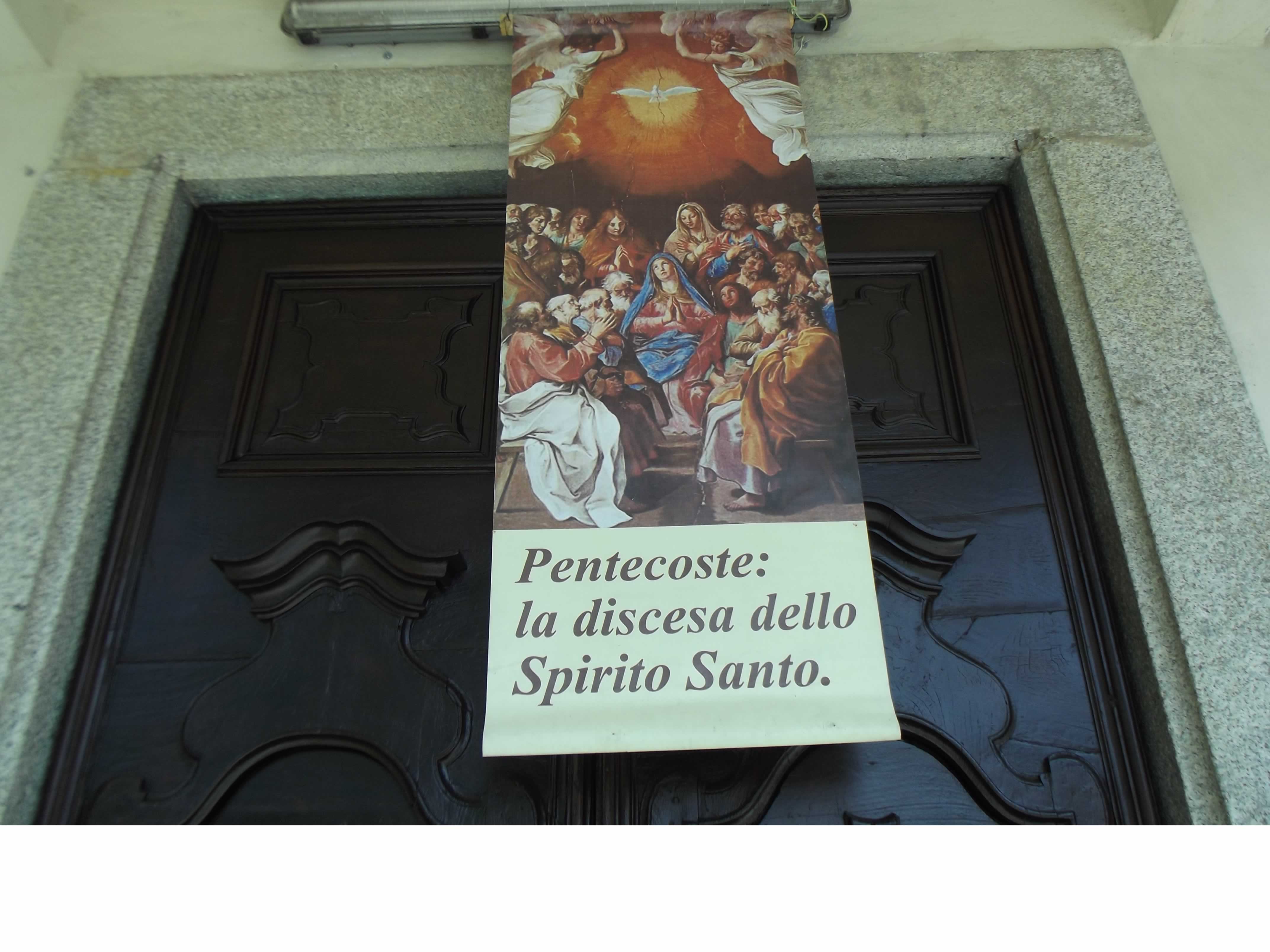 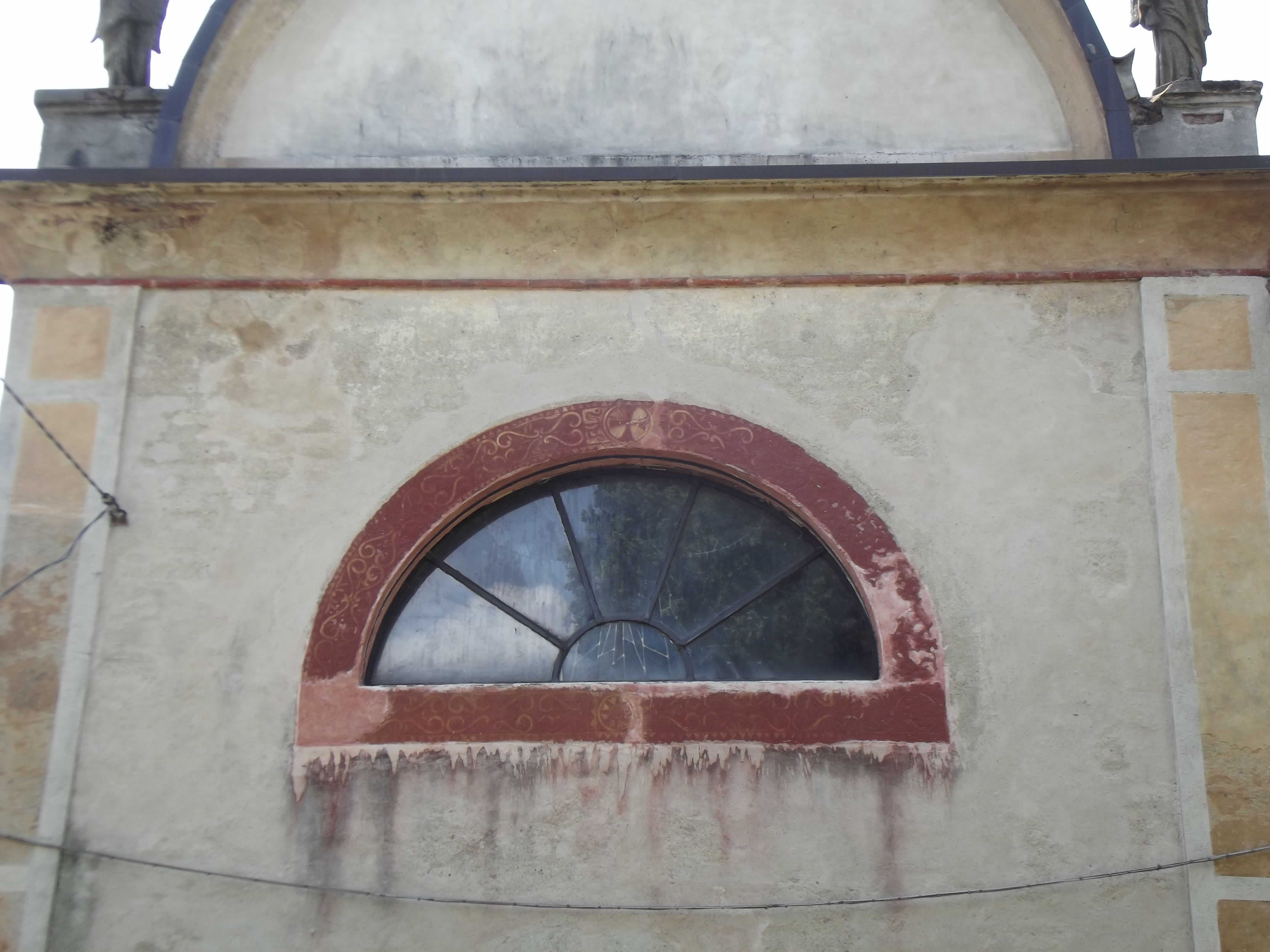 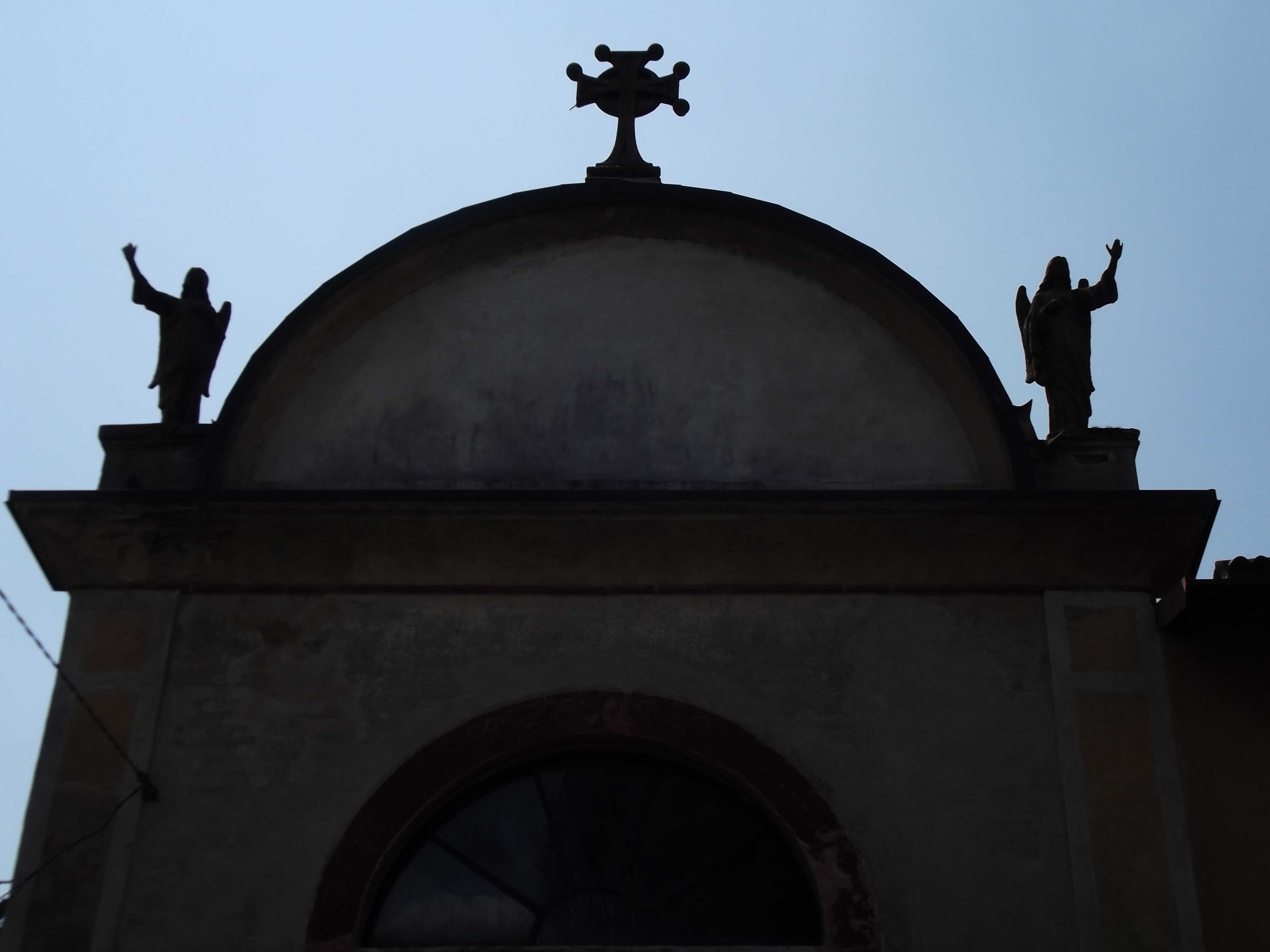 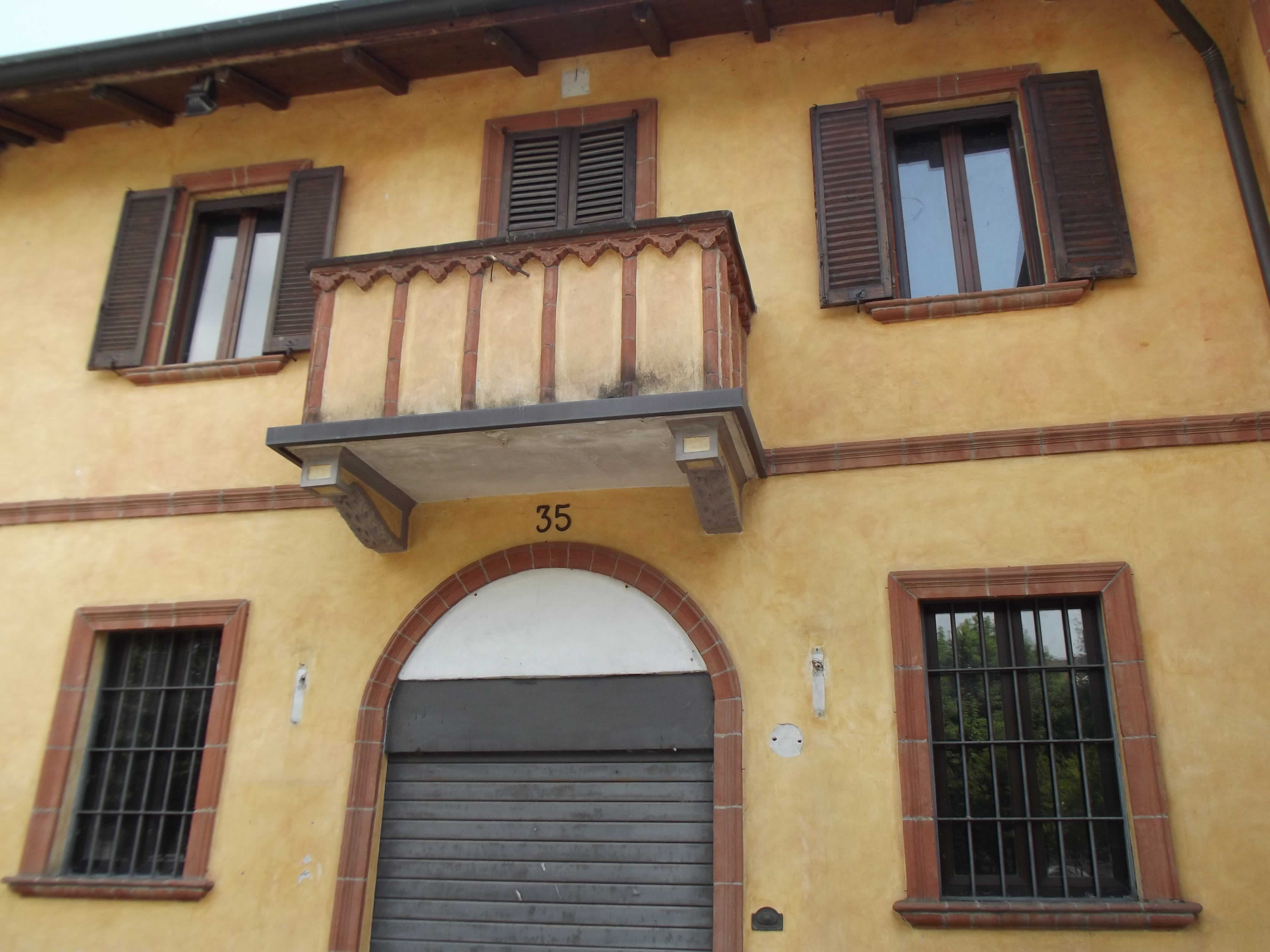 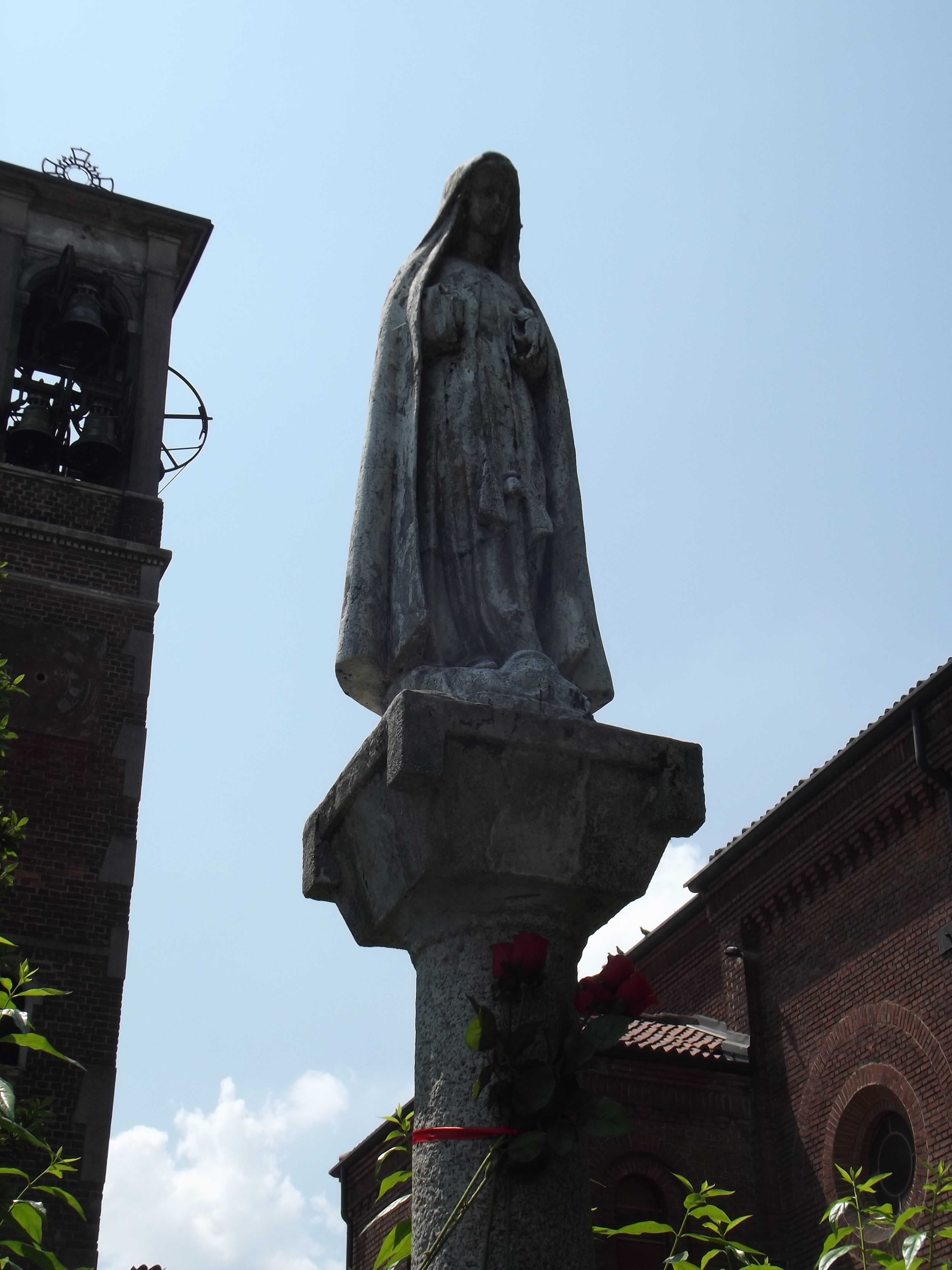 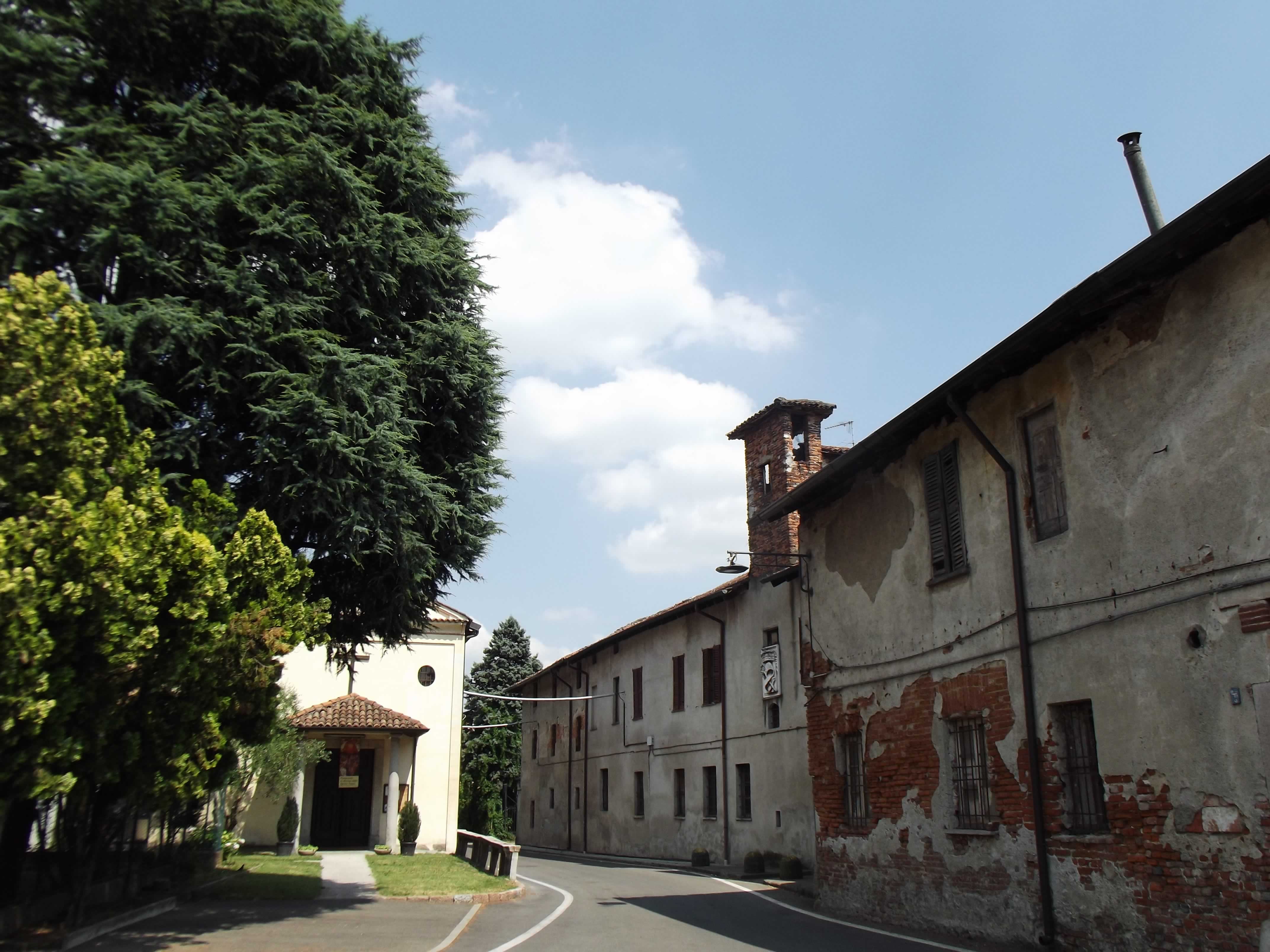 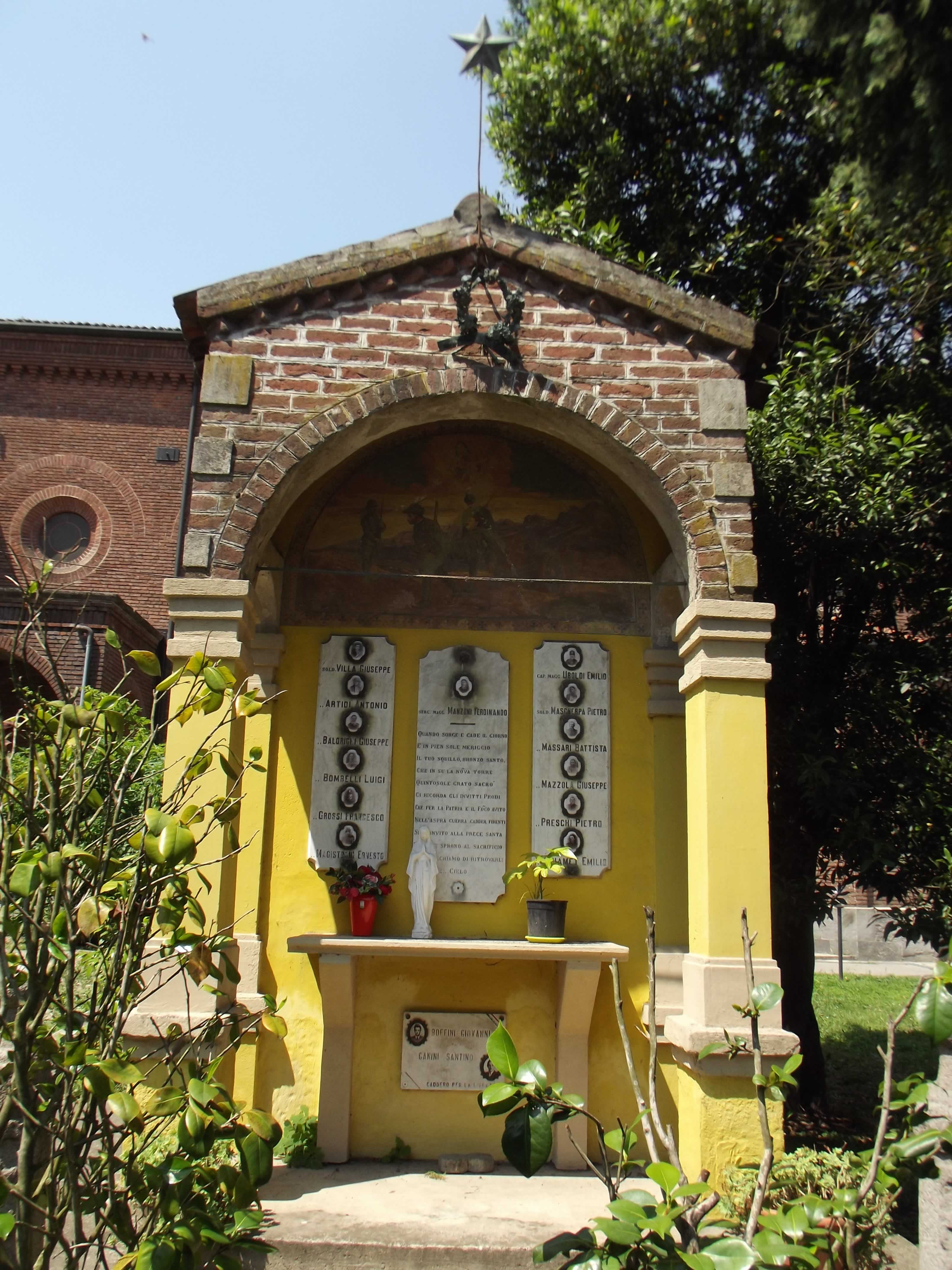 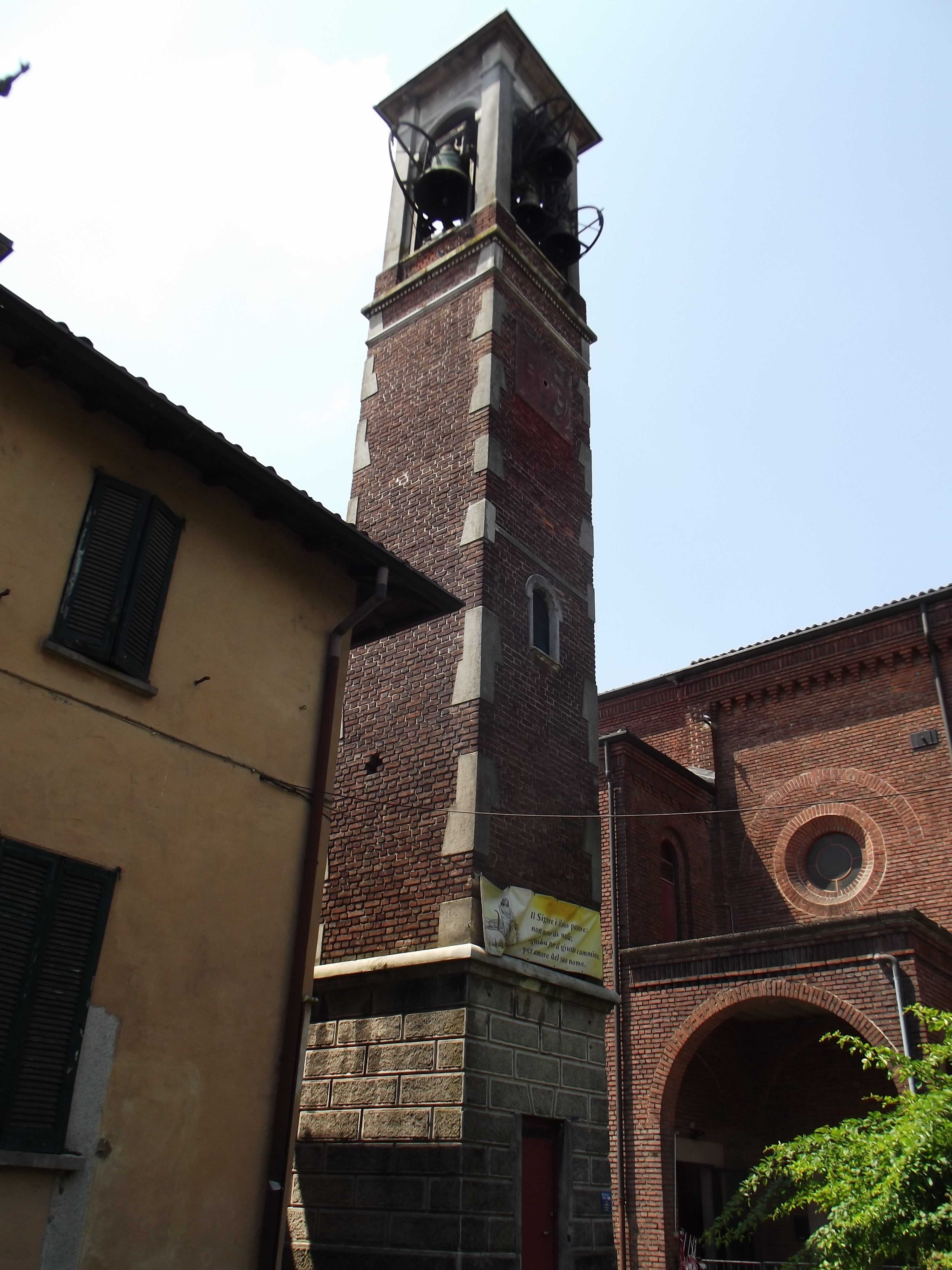