Powered Hang Glider Training in the US

I’ve been in touch with Paul Olson in Racine, Wisconsin, who is the US dealer for the Doodlebug (made by hand in UK), which is a lightweight power unit that attaches to ordinary hang gliders. 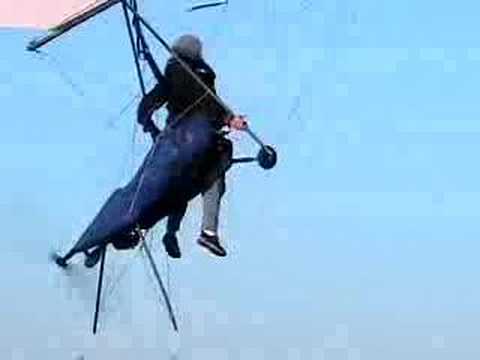 I’m hoping to get enough students together in the spring or summer to host him for a training session. He teaches ‘scooter-launching’ by the way, and Carol has a suitable scooter.

With a hang glider, scooter-launched, you can find thermals (there’s one under each cumulus cloud) to take you up as high as you need to go, then end up on the ground where you launched, which is a huge advantage over the old way of schlepping hang gliders to ridge tops, then getting retrieved at the landing site.

The Falcon hang gliders, which Paul also sells, can be packed small enough to fit in a commercial jet’s baggage compartment or under the deck of a sailboat.

A good hang glider (new) is around three grand and Doodlebug is another six grand but how much do you want to get to those pesky, fortified and surveilled mountaintop death arrays, long-range water gifting routes and remote underground bases? I REALLY want to get that done [Image Can Not Be Found]; tho I’ve already got some wings. Carol’s interested in teh doodlebug and she and I could fly together this way (my plane is stable at slow speed).

HIs email addy is [email protected]

That guy is obviously a pro, he’s riding around like a maniac and makes it look very dangerous, more dangerous than it is. still, paragliding is alot more dangerous than flying in ultralights although it can be done relatively saftely. IÂ´ve only ridden on one of those in tandem with an instructor, and hear about too many folks crashing into the hills around here to try it by myself, also the cost of paragliders is the same if not more than an ultralight. If that wing folds or the cables get tangled you have a big problem, you donÂ´t have those problems with fixed wing craft of course.

Reminds me of the words of one of Walt Kelly’s characters in the old comic strip POGO, which ran in the 50’s and 60’s:

“I’m a terra firma man myself. And the more firmer, the less terror.”

Heheh, these sentiments probably explain why more people aren’t taking to the skies in minimal aircraft

REally, it takes training and skill to pull it off. Flying, I’m discovering, is a lot harder to learn than riding a bike or swimming is but it seems like the ultimate freedom of movement/travel to me. If you’ve been around people who fly you noticed that it’s a genuine passion and is infectious. In America, the feds made it essentially impossible for most folks to get a pilot license, which is why you’re not likely to see many small planes other than what the felonious, nosey feds are flying over your house, but ultralights are still unregulated, as are hang gliders.

That said, check out this Youtube video, which I’m offering with the caveat that if some CIA disinformant comes along to claim that ‘he made this film as a hoax’ you’re on your own:

Thanks for sending it to me, Laurent!

Observing, over and over in Florida, the apparent ability of dolphins to disappear from teh scene and considering that these Operators disdain all technology (except maybe orgonite) makes me feel a little sheepish, I admit, about needing so much physical infrastructure to get around in the world. I refuse to let that stop me from doing what it takes to get our work done, though, and the more we learn from and connect to The Operators, the more apparent it is to many of us that this materialistic stage we’re in the middle of is apparently a necessary step in our collective transformation.

It would be nice to load up that African shaman with orgonite and convince him to flit up to a remote mountaintop death tower array, though.

STevo told Carol and I about the Doodlebug and Carol got the notion that she’d like to try it. I leapt at the opportunity to, grid willing, make it possible for her (and me) because if she had one of these, we could fly together at slow speeds. For some reason she’s not willing to consider flying a little plane like mine, though she’s the more skillful pilot.

I had a classmate in highschool that could levitate, and demostrated that infront of alot of students, he was kind of a show-off in fact. He would rise about a foot off the ground surrounded by people. He also pulled off some mindblowing card tricks, a bit like those street preformers you see on HBO, but without a produccion team. He was a bit inclined to the “dark arts” though, liked heavy metal music, marylin manson, etc, and gave most people the creeps. I’m sure some “white magic” practicioners can do similar if not more incredible feats, they’re probably just too humble to be showing off. I guess its like the diference between DOR and POR tech, both work, but DOR tech/magic is not “free” and is alot more complicated. It would be fun to see if some orgonite around that African “shaman” would increase his skill or make him collape to the ground.

Ale, thx for sharing that because it’s a good example of the distinction between sensationalism and real magic.

I saw a fellow take his fingers off and replace them in the middle of a small crowd in a bowling alley. I noticed that his associate was walking close around the edge of the crowd and I assumed that one was picking pockets. They left really fast [Image Can Not Be Found];

A Persian friend told me that when he was in the army (that was before the war that destroyed both countries) he was a teacher in a rural village, where clearly saw a man remove his head and replace it during a ceremony.

Sensationalism is perhaps just a distraction that keeps us from looking at reality with a balanced mind, which is why the disinformation websites get a lot more traffic than the substantive ones do.

That’s not to say that the African witch doctor in the film isn’t performing a legitimate task, of course. I didn’t get a creepy feeling from it but that’s only my personal impression, of course. I read about an initiation rite for young men in West Africa in which a drum was turned into a hyperdimensional portal that the initiate had to jump into. Talk about trust! [Image Can Not Be Found];

I gotta tell ya that this flying thing is pretty daunting. On my own, I still haven’t done more than hop up around fifty feet while going down teh runway a few times but at least that experience boosted my confidence and also put an end to my anxiety-induced insomnia a month ago. I’ve got one more lesson in Roger’s plane, then he’s going to start coaching me over the radio from the ground, here at the field.

It snowed a lot last week. I laboriously shovelled through the foot of snow from the hangar to the taxiway, then the guys plowed the runway and taxiway, then the next couple of days all the snow melted but it looks like my final lesson will be coming up on Saturday, grid willing.

Anthony W told me that he thinks it’s an absolute hoot to consider me flying that funny little airplane to a mountain top, dropping equally ridiculous, apparently inane objects on a billion-dollar death ray array and disabling it. Nobody appreciates the humor of this scenario more than I do, though.

Hey, what do you suppose the Unorganized Etheric Air Force will look like in five years? I bet it will have some real airplanes in it. Maybe we’ll have a C-130 to drop cloudbusters all across the Sahara, for instance. Talk about humble beginnings!

Here’s another unregulated airplane (thanks, Mike in Wales!)
http://aeriane.com/swift’light-pas.htm
Not as portable as a Doodlebug, which can be stowed under the deck of a small cruising sailboat, but it’s elegant and economical (once it’s paid for [Image Can Not Be Found]; )