It was tough to know where to put this very interesting email from a woman in Florida:

I’m writing you to add some of my own observations that I have had with orgonite. I have been reading and watching your forum for some time, and recently there have been some posts which I find to be very interesting. One of them was concerning orgonite and plant growth…

I think that everyone has a role or part to play in this macro-organism that is the human situation. Each person will listen to their own inner voice as to what their part is. Several years ago, I came across orgonite, and somehow ended up with your websites and instructions. It was a very unstable time for me, so when I decided to try to make orgonite, I made as much as I could with $100. I think that I ended up with some 30 tower busters and one H. Handgrenade. I gifted the closest towers to my house, and distributed most of the other pieces to any bodies of water that I could find.

Well, the Holy Handgrenade was pretty cool to me , so I stuck it under some plants in one corner of my garden and left it there. Well, this all happened at my parents’ house, so I, of course, have left since then and live in another state now. I came back just recently for a visit (it’s been maybe 3 years now), and it’s so interesting to see this corner with the orgonite. The plants are so big there. We have the exact same plants in the front on the house, yet they are not even 1/3 the size of these. Plus, the health of these plants is very very strong, unlike many other plants that we have which seem weak and puny, always on the verge of dying. Also, the little lizard-gecko creatures that live here (Florida) seem to prefer congregating in the “orgonite corner”. Everytime I pass this corner, I either see the lizards, or you can hear them rustling about. No other spot is this active! It’s really popular! I wonder is this because of orgonite?

Well, also t here was a few threads concerning Russia! Well, I lived for many years in Russia, and this is something also very interesting to me! I noticed the picture of the towers seemingly in the middle of nowhere, and immediately thought of the following pages which I had seen: 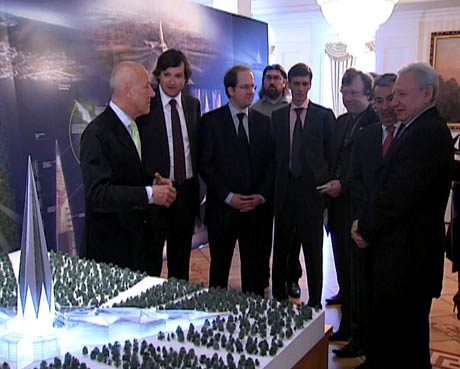 We had already some photos of UFO building Russian developers plan to build in Moscow and the tower shaped like AK-47 in city of Izhevsk.This time there is a plan of one of Siberian Governors 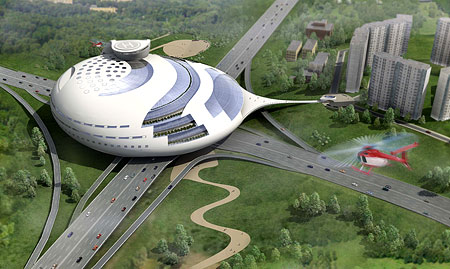 They have decided to build this big thing, and named it Galaxy Building, in one of the areas of Moscow. Construction costs exceed $300 million, but there are plenty investors interested in partici 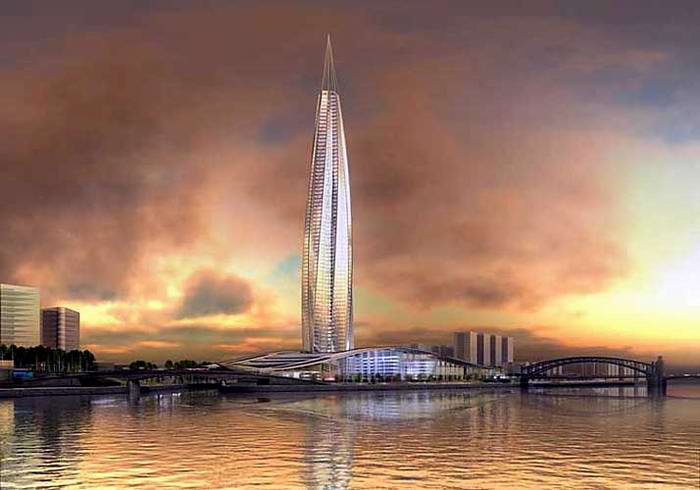 "Gazprom" is the biggest Russian corporation, worth over $200 billion, translated as "Gas Production".It serves gas and oil to the whole Europe, people in Russia often make jokes that Gazprom keep

And I thought they might be of interest to you and Carol, or the other psychics. The last link may just be idea drawings, maybe not true buildings, however while in Moscow I did come across one of these weird buildings. They are some new trend now in Russia, all either white or silver, very futuristic, often times with many curving or spiralic elements… Not at ALL like traditional Russian feeling, which is low-story, soft-looking, with eith er classical or slavic feeling. The Russians are a very “soft” people, and traditionally use woods and other soft materials and colors as their mediums. These outrageous structures are such an antithesis. Also there is strange use of hugely long walkways and sidewalks leading up to these structures, and when I was near one, it felt like the space was HUGELY manipulated. It’s almost disorienting. I can only describe it as a very odd, disorienting feeling.

I’m not really sure why I felt urged to write you this, but there it is. I bought a zapper and H.Protector some years back, and I still love and use them! Oh, and one other thing! Don’t know if it’s me or what, but people in general are very different to me now, changing maybe? Things that you couldn’t say before, because it would be scoffed at or what not, is no longer “weird, out-there” stuff. Even within the past year. Where I was working at, I h ad some very very awesome friends, and we had the most intense wacked out conversations. I was still on the “conspiracy end” of the spectrum, HOWEVER, I was NOT labled insane or a nut, and things that I felt and/or thought were surprisingly not just de facto shoved off to the corner as conspiracy drivel, like I remember, even 5-10 years back. What floored me even more?- I have a personal trainer, and while I’m stretching we chat a bit… somehow the topic of economy came up and somehow (don’t know how) aliens were mentinoned. He looks at me right in the eye, and in all seriousness, says “ANYTHING is possible, ANYTHING is possible.” LOL! I was floored. Even my monstrous die-hard blood-thirsty sex-hating super-moralistic true-believing Mormon mother ended up buying a bikini and wearing it to the beach, no less. I about pissed my pants. And that’s the truth.

Ok, well, it’s been fun writing. Again not sure why, but there it is! Good luck to you and Carol. Wish you best!

Wow, thanks for all that, *******–I really enjoyed your email, so I’m sure many of our readers will, too. I’ll leave off your name for privacy.

It’s tough to get any news from or about Russia, these days, and those pics are priceless. You bet I’ll ask the psychics to look at the buildings. If you can tell me where the crystal tower is in Siberia it would be helpful. Maybe it marks an essential vortex that needs healing, for instance.

Dr von Peters, who goes there two or three times a year, told me that there’s a lot of new construction throughout the country and other signs of new prosperity, which I take as good news.

Thx for the plant report. This is comnmonly seen by people who use orgonite in their gardens but rarely reported, unfortunately. The first time I noticed this marvellous effect was when we put a cloudbuster in the yard during the first few months we ‘found a roost’ after a year on the road, in the first year of this network’s expansion. Though we had moved to a very droughty area of htre Pacific Northwest the plant growth right around the cloudbuster was so verdant it looked tropical. We never watered that spot, either. The grass all around had turned yellow from the lack of rain. When we moved and took the cloudbuster all that verdure literally died within a few days, as in shock.

Orgonite absolutely does dissolve people’s fears and even prejudices, often dramatically. The beauty of it is that they’re almost never aware of the orgonite.

Otherwise, we believe that humanity is undergoing a positive transformation which is acccelerating. It might even be that this transformation, which may have begun a couple of centuries ago in a very subtle way, has made it possible for us to embrace the sort of self-empowerment that orgonite and zappers represent.

I’m very happy to know that people around you are considerably more open-minded than before because many people are reporting this phenomenon now and we experience it, too. I remember when nearly everyone I met was a goose-stepping fascist, as Reich lamentably reported finding on his arrival in America in the late 1930s, but I’m almost sixty and as a white kid I never even met someone of another race until we moved abroad in the mid-60s. Acceptance and awareness in America have improved a lot since then, and much more, lately.