"Siberian Stonehenge" in the Carpathians as Gifting Target

In Jeff Baggaley’s “Mission to Tibet” posts from 2002, he describes his gifting journey to Tibet’s sacred Mt. Kailash.

Here’s a link to the report: http://educate-yourself.org/dc…ec02.shtml

In his words, “Kailash was the main target- the portals the secondary one. My simple understanding of what I was doing in Kailash was that I was to go there and “plug” an energy drain that had been taking place for millennia. And then “plug” the dimensional portal accessing that energy. Those draining that energy are predators, the ones at the top of food chain on the planet. Such is the belief that I was acting on, whatever words you want to use to describe it.”

At the end of the report (which as an aside I would note I found quite compelling), he says:

“A final note: In my preliminary post from Lhasa- actually I think it was a second post- I mentioned a theory about how the White Brotherhood compromised 5 major nodal sites at first in order to harness a certain amount of earth energy to suit their purposes. These five locations are: 1. Kailash,2. a place in Mongolia, 3. in Ethiopia, 4. in the Carpathian Mountains, 5. and the two main islands in Lake Titicaca- the Island of the Sun and the Island of the Moon. I believe that gifting three out of these five places will disable the White Brotherhood system.)”

I’m guessing the megalithic sculptures, this ‘Carpathian Stonehenge’, linked just below, may be what he’s referring to in number four, above.

As an aside, I’d note that body-riddled Stonehenge (whose name translates to ‘Stone Gallows’) is described in the controlled media as having been “an international healing center” - when in fact it is a painstakingly-architected stone machine built to concentrate and inject Death Energy from human sacrifices into the world grid.

In any case, if anyone reading this has gifted or can gift the ‘Carpathian Stonehenge’ site, it might be very helpful.

“There are more than ten prehistoric rocky sculptures in Carpathians . Scientists do not know who and when cut out these sculptures , they were found in the village of Snidavka in Kosov region.

Archeologists always knew that there were rare sculptures in the mountains. However, any explorations were forbidden during the Soviet time . But when the exploration was allowed there were no money. Research started only three years ago, and ten rocky rarities were immediately found

This sculpture could have become the gold mine for tourist business. But it has never become . 14-meter sculpture of a pregnant woman is the most valuable discovery of archeologists. It might not have analogs in the whole world.

According to archeologist Mykola Kogutyak, the sculpture is 5-6 thousand years BC old. “It is the interweaving of north Black Sea civilizations,” he said.

Scientists do not know who and when cut out these sculptures. Ones say they belong to Trypillya culture, others mention more ancient civilizations, but both camps are sure that these are heathen symbols. In August scientists are holding international conference to define the fate of the mountain treasures. Archeologists stand for creation of historic and cultural reserve in Carpathian. Then it will change completely not only the tourist map of Ukraine, but of the whole Europe."

The Ethiopian site, number three on the list at top, is probably Tiya. Our first clue is that it’s a UNESCO “World Heritage Center”, which reads as: “vigorously-protected hijacked Earth Grid node.”

In the article that follows, you can see how, in a half-truth, the megaliths are said to have a funerary significance . They do! It’s just they don’t happen to mention the ‘funerals’ were those of human sacrifice victims.

The site contains 36 monuments, including 32 carved stelae covered with symbols, most of which are difficult to decipher . They are the remains of an ancient Ethiopian culture whose age has not yet been precisely determined .

The stelae from the Soddo region, with their enigmatic configuration , are highly representative of an expression of the Ethiopian megalithic period.

Soddo lies to the south of Addis Ababa, beyond the Aouache river. It is remarkable because of the numerous archaeological sites of the megalithic period, comprising hundreds of sculptured stelae, that have been discovered there. The carved monoliths vary in size from 1 m to 5 m. Their forms fall into several distinct categories: figurative composition; anthropomorphic; hemispherical or conical; simple monoliths. In the northern area are to be found stelae with depictions of swords, associated with enigmatic symbols and schematic human figures.

Among the most important of the roughly 160 archaeological sites discovered so far in the Soddo region is Tiya, lying 38 km south of the river, which is also one of the most representative. Roughly aligned over an axis of 45 m there is a group of 33 stelae, with another group of three stelae a short distance from them. Of the 36 stelae at Tiya, 32 are sculpted with vaguely representational configurations (including the sword designs), which are for the most part difficult to decipher . One depicts the outline of a human figure in low relief.

They are the remains of an ancient Ethiopian culture the age of which has not yet been precisely determined. However, they have been interpreted as having a funerary significance , as there are tombs scattered around the stelae.

RE: Lake Titicaca, check out the second link, below, for pics of the megalithic temple (also attached here) at the bottom of the lake. It looks almost exactly like the baffling, puzzling Yoganuni ruins in Japan. You can see how the word ‘riddle’ is used in the second link.

The words baffle, puzzle, riddle are used when subjects are to be obfuscated, hidden.

The 2nd Chakra on this planet is located at Lake Titicaca. To be more specific it’s centre is located on the Island of the Sun where the Titicaca Stone is found. The lake itself is located in the high plateau of Collao in the Southern highlands of Peru, in the border with Bolivia.ope.” 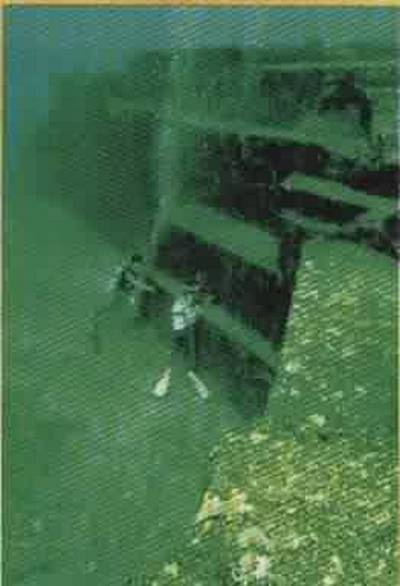 The temple at the bottom of Lake Titicaca, discovered in 2001 an Italian expedition Lorenzo Appice. Photo: Kulichki.ru

Armenia’s Carahunge stone circle complex, one of the oldest known megalithic sites outside of Turkey, dating to around 5500 BC. investigations by Russian prehistorian Professor Paris Herouni indicate that Carahunge (car means “stone” in Armenian, and hunge means “voice” or “sound”), located some 200km from the Armenian capital Yerevan, not far from the town of Sisian, was created as an astronomical observatory marking the movement not only of the sun and moon, but also the stars.

This astronomical site is made of 203 slabs of basalt, some weighing over 50 tons and they stretch for 1/3 of a mile. At the center of the structure stands the stone circle, or henge. There are 85 stones with small holes in them pointing at different angles to the stars in the night sky and to the horizon. It is believed to be the oldest observatory on the planet.

The outline of these stones clearly corresponds to the constellation Cygnus or “The Swan” or “The Vulture”. Oxford professor and geographer, Nicholas Howorth, believes with certainty that Carahunge connects man and his life on earth to the heavens above.

Arkaim (Russian: Аркаим) is an archaeological site situated in the Southern Urals steppe.

Standing alongside such geological oddities as Russia’s Manpupuner stone pillars, or the Seven Sleeping Giants, some of the most interesting Neolithic monuments stand within the borders of the former Soviet Union.

Arkaim is one of those sites. Arkaim, or Аркаим in Russian, is considered by some to be the most important and enigmatic archaeological site in northern Europe. The site is wrapped in controversy and is sometimes referred to as Russia’s Stonehenge. It sits on the outskirts of the Chelyabinsk oblast in the southern Urals, just north of the Kazakhstan border.

A SIDE NOTE ON GEOMAGNETIC FIELD VARIATIONS IN THE URALS AND CARPATHIANS:

Vsevolod A. Shapiro1 and

Summary. A precision magnetic survey for the investigation of current activity in the Earth’s lithosphere has been carried out in the Urals and in the Carpathians. As a result of this research three types of time variation of the total field were discovered. These are:

(2) The slow but localized ‘anomalous field’ change from year to year corresponding, presumably, to anomalies of a tectonomagnetic nature. The normal pattern of the secular variation field here is disturbed by sources located in the upper part of the lithosphere.

(3) Irregular time changes of the field with rather large amplitudes (up to 10–20 nT). Repeated observations of such anomalies show that the field changes significantly here even during one day . Both in the Urals and Carpathians these anomalies form extended elongated structures with widths up to 10–30 km. These anomalies usually coincide with those deep faults where the strongest recent crustal movements have been determined by means of geodetic observations. The analysis of the results of precision geomagnetic surveys in the Urals and in the Carpathians shows that geomagnetic investigations can be used for the exploration of tectonically active zones.

Re: Jeff Baggaley’s “a place in Mongolia”…

China’s ‘Stonehenge’ found in the Gobi Desert: Mysterious rock formations may have been ‘sacrificial sites’ used by sun worshippers

Mysterious circular and square structures are found in Turpan, China