“Théoden King of the Mark had reached the road from the Gate to the River, and he turned towards the City that was now less than a mile distant. He slackened his speed a little, seeking new foes, and his knights came about him, and Dernhelm was with them. Southward beyond the road lay the main force of the Haradrim, and there their horsemen were gathered about the standard of their chieftain. And he looked out, and in the growing light he saw the banner of the king, and that it was far ahead of the battle with few men about it. Then he was filled with a red wrath and shouted aloud, and displaying his standard, black serpent upon scarlet, he came against the white horse and the green with great press of men; and the drawing of the scimitars of the Southrons was like a glitter of stars.

Then Théoden was aware of him, and would not wait for his onset, but crying to Snowmane he charged headlong to greet him. Great was the clash of their meeting. But the white fury of the Northmen burned the hotter, and more skilled was their knighthood with long spears and bitter. Fewer were they but they clove through the Southrons like a fire-bolt in a forest. Right through the press drove Théoden Thengel’s son, and his spear was shivered as he threw down their chieftain. Out swept his sword, and he spurred to the standard, hewed staff and bearer; and the black serpent foundered. Then all that was left unslain of their cavalry turned and fled far away.” 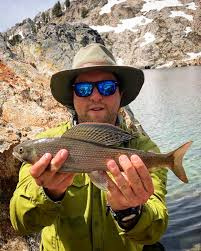 It’s July 2020, and great positive changes are underway at every level of our reality. They began in earnest in 2012, and have been increasing in speed and magnitude. I’ve been writing this series of articles documenting the subject since July of 2013.

These epochal positive changes are being driven by many hundreds of thousands, if not millions of simple, inexpensive Orgonite devices based on Wilhelm Reich’s work.

That’s more than half again as long, in just four years . And it is a baseline average increase in length per day of .037% over each of those 1,494 days.

The catch and release record for the Arctic grayling was instituted in Idaho in 2016.

The first Idaho catch and release state record for the Arctic grayling was set on June 24, 2016. The fish was 10.4 inches long. That record stood for 36 days.

Such records are usually broken by tiny margins, however, here we are in the early period of record collection, and this very large increase in length can be attributed to the fact that the first fish submitted wasn’t an example of the largest fish in the stock at that time. As was evidenced by a far larger fish caught just a short time later.

The increase in size is decreasing, going forward in time, as it should, as organisms grow in progressively smaller increments as they approach their maximum possible size.

The growth rate is continuing to decrease, going forward in time, as it should, as organisms grow in progressively smaller increments as they approach their maximum possible size.

Such records are usually broken by tiny margins. While here the margin between records was over four times that seen in the record that immediately preceded it.

The growth rate is increasing exponentially, going forward in time. That’s not supposed to be scientifically possible.

There’s clearly been some great positive change in the environment in the Arctic grayling in Idaho.

There’s an international news blackout in place on the subject. Because you’re not supposed to know that the primary driver of the size, fertility and longevity of any organism is the health of its Etheric environment.

Lanson Stavast was fishing at the Alpine lake in the Copper Basin area of Custer County when he reeled in a 14-inch Arctic Grayling, breaking the state record.

(The story contains no information on the previous record. - ed)

July 8, 2020 - Boise man catches record grayling while fishing at lake in the Sawtooths

Brian Brooks reeled in an Arctic grayling while fishing at Alpine Creek Lake in the Sawtooth Mountains. The fish measured 16.2 inches, topping the old catch/release state record by more than two inches.

The previous record of 14 inches was set by Lanson Stavast in 2018.