Stationkeeping: I’m heading to Oahu for a week, and won’t be publishing anything while I’m away. Have been swimming two or three times a week here in Brooklyn, and am exciting to surf with my friends, if the weather permits.

I’ve attached a recent picture of one of my friends, the photo is East-side Oahu. 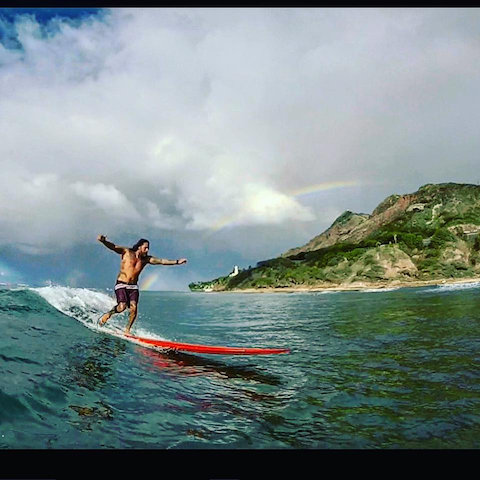 It’s January 2020, and great, epochal positive changes are underway at every level of our reality. They began in earnest in 2012 and have been increasing in speed and magnitude since.

I’ve subjectively concluded that those changes are being driven by untold thousands of simple, inexpensive Orgonite devices based on Wilhelm Reich’s work. Those devices are collectively unknitting and transforming the ancient Death energy matrix that’s been patiently built and expanded by our about-to-be-former Dark masters, well, all the way back to Babylon and before. And the Ether is returning to its ages-long natural state of health and vitality.

One of those changes is that Nature is booming and burgeoning to a level not seen in my lifetime.

Since that statement directly refutes our State Religion, which holds that " Poor Mother Gaia is Dying, Crushed by the Virus-Like Burden of Mankind ", I’ve appended numerous recent examples below to support it.

One current headline below, from Ukraine, reads “Farmers in Ternopil region set record in grain harvest.”

In the story, you’ll see how the words " gathered " and " collected " are used to imply that more assiduous harvesting effort led to the most grain ever seen in the history of agriculture in Ukraine.

They’ve done everything they could to minimize and obfuscate the margin. So I had to do the math.

It’s a 5.8% increase in grain production, in just one year.

The article does not offer any suggestion as to what drove that huge increase. Such records are usually broken by tinier and tinier margins.

That article won’t tell us what the previous record was, or when it was set, or the margins between the records. We learn of a 4% increase in crop yield, year over year, driven by " sufficient rainfall across the region."

They say " sufficient ", with puckered lips. Sufficient to drive the most soybeans in the history of Agriculture in Brazil.

Then they close the article by blowing smoke to try to confuse you into thinking it was increased planted area :

Another article below is headlined “Virginia farmer shatters his own yield record with 616 bushels of corn per acre.”

The headline has used the lurid but general " shatters" to hedge against providing a much more impactful, specific percentage. So I had to do the math.

So, what drove that quantum increase in yield, to the highest level in the history of agriculture?

Well, if adverse growing conditions affected most farmers, how can this current headline from Kansas be true?

Adverse growing conditions did not affect most farmers. That’s “Poor Mother Gaia is Dying” propaganda. That’s a bald-faced lie, caught by me, and published here.

It’s not the technology, or the techniques, which are incremental, which are driving the quantum increases in yield and production. Those are plausible deniability excuses put forward by a controlled press, thin straws for your subconscious to grasp, in hope of denying and obfuscating the larger trend I’m documenting here.

In Kansas, 2019’s record crop was up 25 percent from last year’s. Cultivated acres were up 21 percent from a year ago, and yield was “up 4 bushels”. The author has used the more-general “up 4 bushels” to hedge against providing a much more impactful, specific percentage. So I had to do the math. Yield increased 3.1%.

They’ve tried to paint it that only corn-gymnasts like David Hula are seeing record yields, and everyone else is suffering. It’s pure sleight of hand, Black magic wordcraft, misdirection.

The positive changes are permanent. The tactics used to deny, rebut and refute them are static, and unchanging.

What do you think is going to happen to the propagandists, and their output, in the face of this unceasing positive change?

Please consider sending them highest love energy as you read this.

December 17, 2019 - Virginia farmer shatters his own yield record with 616 bushels of corn per acre

The previous world record of 542 bushels per acre, set by Hula in 2017, was shattered this year on ground he strip-tilled with the SoilWarrior, a strip tillage and nutrient placement system from Environmental Tillage Systems (ETS). This is his second year of using the strip-till system.

An advocate of no-till for 30-plus years, Hula is no stranger to breaking yield records. The Virginia farmer has topped the NCGA National Corn Yield Contest five times since 2003 in the strip, min, mulch, ridge-till irrigated category.

The previous world record of 542 bushels per acre, set by Hula in 2017 using Pioneer® P1197AM™ brand corn, was shattered this year using Pioneer® hybrid P1197YHR™ on ground he strip-tilled with the SoilWarrior, a strip tillage and nutrient placement system from Environmental Tillage Systems (ETS) — his second year using the strip-till system.

Ukrainian farmers in Ternopil region gathered a record amount of grain crops in 2019.

“Farmers in Ternopil region collected a record amount of grain in recent years. In 2019, they threshed about 2.7 million tonnes of grain and leguminous crops, which is 148.2 thousand tonnes more than last year,” Stakhiv said.

(Where “gathered” and “collected” implies more assiduous effort led to the most grain ever seen in the history of agriculture in Ukraine. - ed)

Kansas corn farmers produced a record crop in 2019, according to the USDA/NASS Annual Crop Production Report released today. The Kansas 2019 corn crop was estimated at a record 800.66 million bushels, up 25 percent from last year’s production, according to the USDA’s National Agricultural Statistics Service. The previous record of 699 million bushels was set in 2016. Area harvested for grain, at 6.02 million acres, is up 21 percent from a year ago. Yield was estimated at 133 bushels per acre, up 4 bushels from last year. Kansas ranked sixth in U.S. corn producing states.

According to SP Globa, the soybean yield was expected to rise 4% year on year to 3.32 mt a hectare on sufficient rainfall across the region in the past few weeks , Brazilian national crop agency Conab said in its latest report.

(As if the largest soybean crop in the history of Brazilian agriculture could have been grown without “sufficient” rainfall throughout it’s growing period. “In the past few weeks” is a blatant hedge against the accurate picture of a world that has returned to balance, with generous, regular rainfall. It’s drought propaganda, pure and simple. - ed)