This weather control unit, colloquially known as a cloudbuster, was built by the author from the basic inventions of the late Dr. Wilhelm Reich. As an investigator of etheric energies and forces, the author is convinced that the same primary energy manipulated in such units as this is the operative power behind UFOs of both the biological and construct type. He has used special variants of the cloudbuster to attract and photograph UFOS with techniques he developed in the 1950s.

I was googling cloud busters and
I found the photo parked at a german website and then I linked over to more german intel on ufo’s and such, but I can’t read german, so I don’t know if they are a source of good intel or dis info.
I also keyed worded willys wand and it led me to an article about it on http://www.educate-yourself.org, which bty is where
I first learned of Don and Carol Croft and their new cloud buster. That was in back in 2001 !
As far as Trevor James Constable goes, I think on the old cloud buster forum we all figured out that Trevor was
more into making money with his cloud buster than exploring the usefullness of the Don Croft style cloud buster, which we all know to come and love WORKS. I listened to Trevor on a Rense radio broadcast 5 years ago warn people to stay away from
trying to modify the weather on their own and leave it to the experts like him .
I haven’t heard much on what Trevor has been up to lately, since I think the bad talking of Don’s cloud buster backfired on them and
drove 100’s if not 1000’s to want to learn more and eventually build there own Croft style cloud buster.
I personally don’t like being told what to do by anyone, so I can see why when Trevor said that, I was well, OK then
let’s build one . [Image Can Not Be Found] 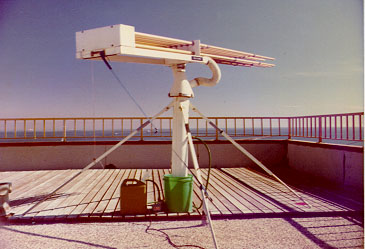 Mr. Constable’s cloud buster Willy definately brought some ufo traffic by overheard, since you can observe the ufo traffic filmed on a google video from a link on one of the sites below.

Trevor Constable got terrific results with his cloudbusters. I think he’s the only person since Dr Reich who achieved this, so I’m assuming he’s energy sensitive.

He was featured by Jeff Rense on several of his syndicated radio shows during January and February, 2003, when Rense was campaigning to discredit orgonite cloudbusters. I think Trevor Constable felt that his turf was being threatened, so he wholeleartedly backed up Rense.

Really, though, what we’re doing is not a lot like what Dr Reich and others achieved with the original-style cloudbusters and their modified versions. The main distinction is that we can’t cause harm with ours, nor is ours capable of such extreme positive results, either. Orgonite is an essential energy balancer, after all.

Rense abruptly stopped mentioning us, also suddenly removed all the slanderous material from his site regarding orgonite and cloudbusters after it appraently became clear to him and ‘others’ that all that attention had caused an immediate expansion of this unorganized network [Image Can Not Be Found];

Dr James DeMeo, around that time, also discovered to his dismay that his lecture tour in teh German-speaking countries, in which he denigrated orgonite and warned people not to make ‘Croft-style cloudbusters’ got similar positive results, there. I guess there’s no such thing as bad publicity for us as long as we keep our noses fairly clean [Image Can Not Be Found];

Trevor Constable persuaded Ken Adachi to call our invention a ‘chembuster’ which is a name I’ve always detested, by the way, but since Ken Adachi was the only one promoting the information on the web in those years I kept my mouth shut [Image Can Not Be Found]

That said, Constable has written several books that are well worth buying and reading, including one about life forms in our atmosphere which defy gravity, resemble single-cell organisms but are sometimes enormous, can be clearly photographed with infrared film and are often mistaken for UFOs on radar. some of them are huge and it may be that someday someone will find a connection between these and the Sylphs.

Constable preaches Theosophy directly, so if you want to glean factual information from his books it may be helpful to know this.