Covin - noun -A secret contrivance between two or more persons to defraud and prejudice another of his rights.

Not having it all their own way, continued: a Deseret News story from just two days ago is headlined “Anti-mask protests ensue at Herbert’s, Cox’s homes as state reports nearly 2,700 cases Sunday”.

Can you see how, under the false guise of familiarity, they gymnastically avoided saying “Governor”, and used the general “state” in place of Utah? In propaganda terms, that “compartmenalizes” the phenomenon.

Now, how or why the mob has given up torch-carrying as a method of influencing unwilling generational Satanist authority figures I’ll never know. Ditto the pot of tar, and the bags full of feathers. But that, my friends, is precisely why we are in the mess we’re in today.

The propagandist who wrote the Deseret News article placed the hedge “as State reports nearly 2,700 cases Sunday” on the end, hoping you won’t wake up to the fact that the numbers are grossly exaggerated.

About a week ago, euronews.com said “Coronarvirus: A third of people in Kosovo believe COVID-19 is a hoax”.

A third of the people in Kosovo know that the folks in charge there are grossly exaggerating the numbers.

Can you see how they used the word “believe”? That’s to pull the whole conversation off into the realm of snake oil religion, which is what is, in fact, is taking place.

Can you see how they used the word “believe”? That’s to pull the whole conversation off into the realm of snake oil religion, which is what is, in fact, is taking place.

“Believe in science”. Science is factual, or it is not. “Belief” is the province of religion, and, in this case, that’s snake oil religion.

But a whole bunch of people can watch a film of WTC-7 dropping at free-fall speed into its own footprint and still affirm that 19 swarthy Arabs did it. The 7th building in the WTC complex was not struck by an airplane, for those keeping score.

To this day, another whole bunch of people fervently hold the religious belief that “Oswald acted alone”.

And, so, down through history we go, carried along by the highly-conditioned mental illness or moral insanity of a significant subset of the populace. Yet it might be quite calculating in many or even most of those cases, in that generational Satanism is a force to be reckoned with in our society. What percentage of the population do they actually represent?

We know concretely that they are “the One Percent”. And, while true, that might be a tricky half-truth to keep us from realizing that they comprise thirty percent, perhaps sixty?

So, when “public opinion” polls are made, the power bloc of generational Satanism votes “party line”, whatever that is.

In April 70% of those polled said they’d take a Covid vaccine if offered. In September, the number was said only-generally said to be “fewer than 50%”. Can you see the Confidence game collapsing?

The State propaganda organ chiefexecutive.net wrung its hands and said “How do we bridge the trust gap?”

Trust in the grinning, nattily-suited teleprompter-reading generational Satanists is collapsing, regardless of geography.

I don’t know about you, but I’ve never seen mass protests around a political personage’s house in my 56 years. It shows, signally, that the police are unwilling or unable to stop them.

Funny how they won’t crack the heads or tear gas white suburbanites in Utah, isn’t it?

September 23, 2020 - Fewer than 50% of those polled now say they would be willing to take a vaccine, versus 70% in April. How do we bridge the trust gap? - Chiefexecutive.net

October 8, 2020 - Americans Split Over Safety of Vaccines; 36% Say They Won’t Take COVID-19 Vaccine When Made Available

October 14, 2020 - Half of Black adults say they won’t take a coronavirus vaccine

November 10, 2020 - STAT-Harris Poll: Most Americans won’t get a Covid-19 vaccine unless it cuts risk by half - Statnews.com

Drill down further, however, and the data shows that only 56% of those between 18 and 34 years old are likely to get vaccinated if a shot would decrease the odds of becoming infected by half. This rose to 64%, though, when a vaccine would reduce the risk of contracting the coronavirus by 75%.

Even as Utah health officials and hospitals deal with ever-growing COVID-19 case counts, some residents remain upset about the statewide mask mandate and other temporary restrictions recently put in place by Gov. Gary Herbert and the Utah Department of Health.

(“Upset”, like bad children. “Temporary” restrictions in regard to measures in place for almost a year. - ed) 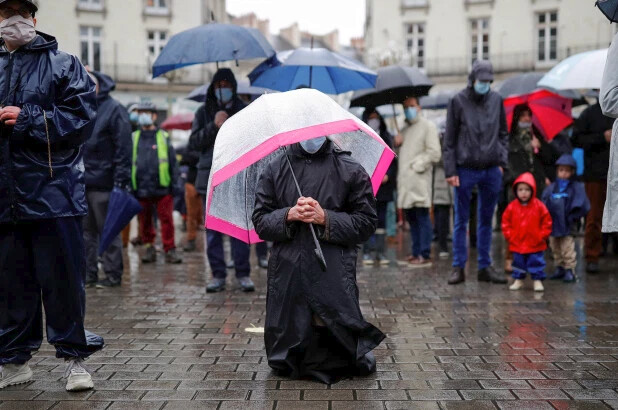