"this sect are not mormons!"

“Most companies say they want aspiring leaders to learn from experience, but they often miss the opportunity to impart lessons gleaned from their “crucibles.” Among the organizations best at fostering experiential learning are the Mormon Church and the Hells Angels Motorcycle Club.”

Misdirection is at the heart of every Confidence game, and is behind every so-called “magic” trick. That’s why an article from Life Magazine from 1965, headlined " Life Rides with the Hell’s Angels ", uses block capitals and three exclamation points to exclaim “THIS SECT ARE NOT MORMONS!!!”.

In modern parlance, those three exclamation points are called “bangs”. The author doth protest too much because the Hell’s Angels are every bit Mormons - a direct outgrowth of the Mormon “Danites”, aka “Destroying Angels”.

Orrin Porter Rockwell served as a bodyguard of Joseph Smith, founder of the Latter-Day Saint movement. The latter a convicted Black magician who died at the hands of an angry mob, with a Satanic “Jupiter” talisman in his pocket. Rockwell was also a personal friend of Smith’s. He was nicknamed Old Port and “The Destroying Angel of Mormondom”.
. 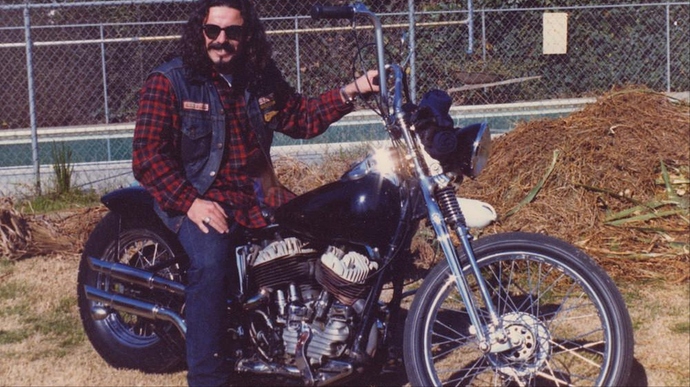 The reason that the Destroying Angel and the Hell’s Angel look so much alike is that they’re part of the same gang .

“The Danites were a fraternal organization founded by Latter Day Saint members in June 1838, in the town of Far West, Caldwell County, Missouri. During their period of organization in Missouri, the Danites operated as a vigilante group and took a central role in the events of the 1838 Mormon War. There is no evidence that the Danites existed after 1838 .”

Up above, here in my own article, the Executive Director of Accenture’s “Institute of High Performing Business” coyly and gushingly links the Mormons and the Hell’s Angels because they’re two arms of the same organization.

You might think I’m being rough on them, but you have to kill someone to get into the gang . And I’m talking about the Hell’s Angels, versus Accenture.

And it’s not just that one gang, the Hell’s Angels, that runs just-barely covertly under the Mormon umbrella. It’s all the large, pyramidally-architected organizations that fall under the vertical " motorcycle gangs ". As I will now demonstrate:

LAS VEGAS – Quiet Boulder City might seem an odd place for the notorious Mongols Motorcycle Club to hold its national meeting, and that’s what law enforcement thought too.

A continuing battle over the police response to last summer’s biker gathering has exposed an ugly side to politics in Boulder City. That town’s police chief alleges he’s the victim of religious persecution .

Police Chief Tom Finn says his enforcement efforts against the Mongols have put him at odds with the city’s entire power structure.

“He says everybody is trying to get him out. The only person who’s trying to get him out is me,” Mongols’ attorney, Stephen Stubbs, said. Stubbs said it is a felony to delete a public record and has gone after the chief. Finn thinks Stubbs is a stalking horse for his fellow Mormons – Councilman Cam Walker, City Attorney Dave Olsen, and City Manager David Fraser. They not only attend the same church, but Stubbs was one of Walker’s most vocal supporters when Walker ran for office.

Finn said, ever since Mongols weekend, Walker, Olsen, and Stubbs, have worked together to make his life miserable.

In a federal EEOC complaint, he alleges it’s because he’s a Catholic, not a Mormon. His critics think the chief has flipped ."

The Mormons, who clearly run the town, also clearly want that notorious motorcycle gang to have their rally, there. And that well, gang of Mongol-loving and, yes, conspiring Mormons clearly outrank the upright Chief of Police.

While researching this story, I learned about a man named Samuel Steward. He caught my attention because of these notations from his biography: "As Phil Sparrow, tattoo artist, becomes favorite tattoo artist of Hell’s Angels " and “With Mormon Missionaries in Elkins, West Virginia.”

Here are some more that caught my eye:

As Phil Andros, pornographer , eponymous design of stories by, 246

was raised Methodist, and his father had taught Sunday School in a Methodist Church for 20 years.

Meets and collaborates with Kinsey , 183

hardcore novels of the seventies, 249; invention of

Son of a Sunday school teacher. Darling of the left. Most tellingly, Jesuit-educated. As necessary, a sometime Mormon, Methodist, and Catholic. A “What To Think” Establishment encyclopedia writer. Pioneer pornographer. The Hell’s Angels’ own pioneer tattoo artist. Spreader of STD’s. Now that’s a sparkling generational-Satanist resume!

Clearly, Hell’s-Angel Phil Andros (not his real name) understood that all war is based on deception. See, in any nation on Earth, if you pretend to be a religious type - of whatever stripe - you can do the most heinous things on the down-low, and no one will ever question you.

No one, except of course for a crackpot fringe journalist such as myself.

This is not to remotely impugn honest religious people of any nation whom sociopaths like Phil Sparrow, aka Samuel Steward are skillful and devious enough to blend in amongst unsuspected. For he and his unholy kith and kin, it’s Black mass on Saturday night, and church on Sunday morning. For reals.

You know how everyone on Earth who is cool wears a " Hollister " shirt, right? Let’s take a look at why that brand became What To Wear:

“Gang activity, real and imagined , has a historical echo in Hollister. In the early part of the twentieth century, the American Motorcyclist Association started the Gypsy Tours, for which bikers were encouraged to hold races, rallies, shows, and picnics . During the Second World War, the rallies were suspended, but afterward they were revived .”

(Let’s go to the revival! No mention is made of the ritual sacrifice or cannibalism. That’s because all war is based on deception. - ed)

"The atmosphere, though, was different. Many of the young men returning from Europe and the Pacific were shattered, disillusioned. Men who otherwise would have expected to stay in their rural homes or work in urban factories had now seen the world, had seen unnameable horrors, and were no longer beholden to pedestrian life paths. Motorcycling became more popular than ever, and the rallies became bigger and wilder.

And so, on July 4, 1947, the Gypsy Tour descended on Hollister, and, by some estimates, the town’s population of forty-five hundred doubled overnight, with all kinds of clubs—the Boozefighters, the Market Street Commandos, the Galloping Goose, the Pissed Off Bastards of Bloomington. The members rode through town, making noise, drinking beer, breaking bottles, and generally causing low-level mayhem. Police struggled to control the crowds."

(Again, no mention of the ritual sacrifice or cannibalism. That’s because all war is based on deception. And they certainly never mention that the killing is part of an organized Black mass, a formal ceremony unchanged going back thousands of years. One bloodline, one single extended family, down through history. - ed)

Rumors of the unruly bikers morphed into rumors of rioting, and six years later Marlon Brando was playing a confused and misunderstood leather-clad young man, caught up in a riot in Hollister.

(Not ‘starting a riot’, but rather merely ’ caught up in ’ a riot. Ah, the poor, lost innocent! All war is based on deception. - ed)

“The Wild One” terrified law-abiding citizens, but to rebellious bike-riding men it seemed like a blueprint for life. Soon enough, the Hells Angels took note , and they began to attend yearly gatherings, although the locals were divided on the advantages of their patronage . In any case, the town saw fit, in 1997, to commemorate the “riot” of 1947 with a fiftieth-anniversary party."

" The locals were divided on the advantages of their patronage ." That’s some great Mil-speak, there! Given that you have to kill someone to be admitted to the gang, I can understand the locals’ ambivalence.

I would invite any remaining Coincidence theorists in the readership to check out this gosh-golly story:

"(Mormon) Elder Holland closed by relating a story — being careful to protect the privacy and anonymity of the participants — of a young man from southern Idaho. One night the young man stormed out of the house and set off to join an infamous motorcycle gang. He succeeded in that resolve and for 20 years became immersed in a culture “of temptations yielded to and degradations explored,” never contacting his parents, who feared that he was dead.

Eventually ending up in Southern California, he one day was sitting on the porch of a rented home when he saw two LDS missionaries making their way up the street.

“With a rush of memory and guilt, regret and rage, he despised the very sight of them,” Elder Holland recounted. “But he was safe, because he kept all visitors at bay by employing two Doberman Pinschers who viciously charged the gate every moment that anyone came near.”

The dogs startled the missionaries as they passed by and continued on, “our man on the porch laughing at the lovely little drama he had just witnessed, wishing only that the gate hadn’t restrained his two dogs.”

Then, the two elders stopped, looked at each other, conversed a little, “likely said a silent prayer,” then turned around and approached the gate.

“The Dobermans on cue charged the gate again, hit it, snarling, frothing, and then stopped in their tracks,” Elder Holland said. “ They looked at the missionaries, dropped their heads, ambled back to the front steps and lay down.”

The man on the porch was speechless as the missionaries opened the gate, walked up the path and greeted him.

“One of the elders said, ‘Are you from this part of California?’

“There was a pause. ‘That’s interesting,’ the elder said. ‘Do you know the [such-and-such] family in Pocatello?’

“With a stunned look, our biker paused, and then, in very measured words, said, ‘Yeah, I know them. They are my parents.’

The younger brother had been born after the older boy had left home. The elder brother did not even know of him."

I’ll provide one final example before I close:

PITTSFIELD – For the first time outside of the courtroom, Adam Lee Hall says he has been falsely charged with the murder of three Pittsfield men in 2011. He also denies police claims that he tried to become an FBI informant, and says he has been visited by spirits that drew him to Mormonism , which he claims his jailers are keeping him from practicing.

“I’m innocent and I can prove it completely,” Hall, 36, of Peru, said in a hand-written letter to The Eagle from the Plymouth County Correctional Facility.

He is being held without bail on multiple charges, including murder, kidnapping and witness intimidation. He wrote that he is looking forward to his trial and to proving his innocence, but did not elaborate in his letter.

A pretrial hearing in his case is scheduled for Berkshire Superior Court on May 22, at which time a tentative trial date might be set.

Alan J. Black, Hall’s lawyer, would not comment on the letter or its contents.

Hall, who police say was a ranking member of the local Hells Angels chapter , along with David Chalue, 46, of North Adams, and Caius Veiovis, 32, of Pittsfield, are charged with the kidnappings and murders of David Glasser, Edward Frampton and Robert Chadwell in August 2011."

“Murdering Hell’s Angel gets religion, turns Mormon in cell, soul suddenly saved by chance, read all about it!”