This weekend we continued gifting bodies of water south of us including the Tennessee River, Lake Guntersville, Smith Lake, and a bunch of connected and unconnected bodies of water and took photographs. 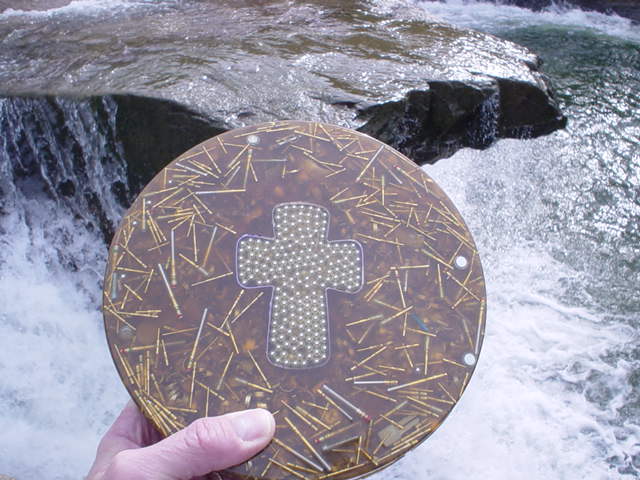 This area in Albertville Alabama has the BEST energy of any place I ever visited. It gives me great pleasure to make special orgonite gifts for special purposes in support of our planet. 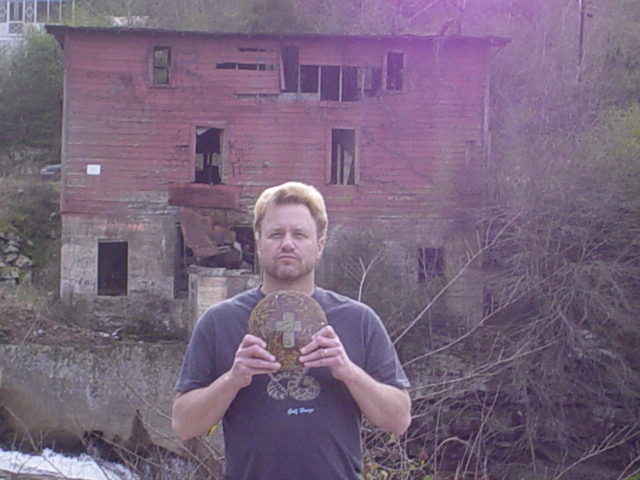 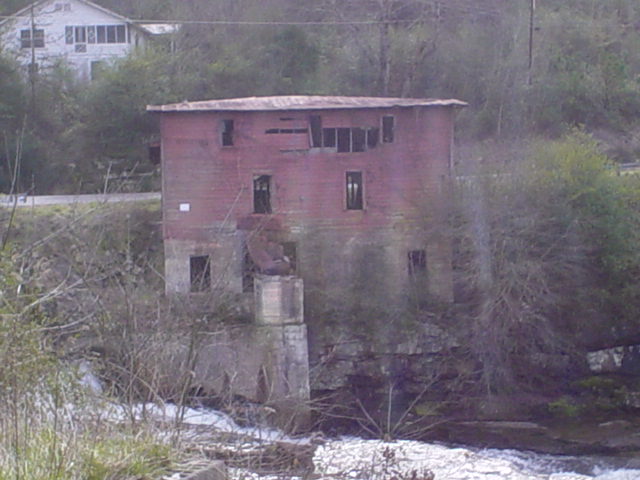 This is an old mill building with another view of vertical rays (possibly the sun’s) I believe this particular area is a vortex. 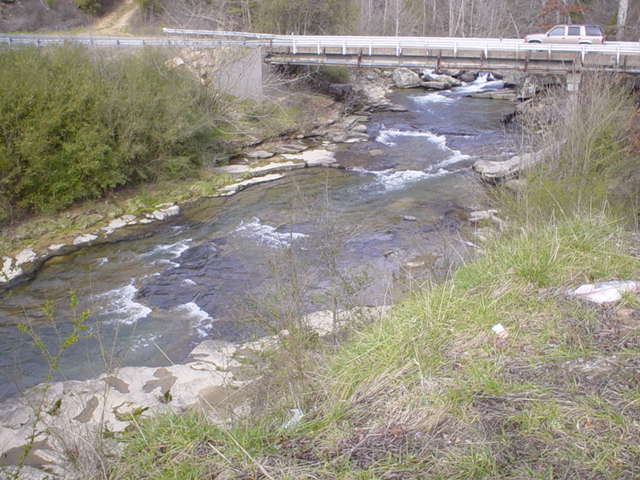 Shot of the river rapids 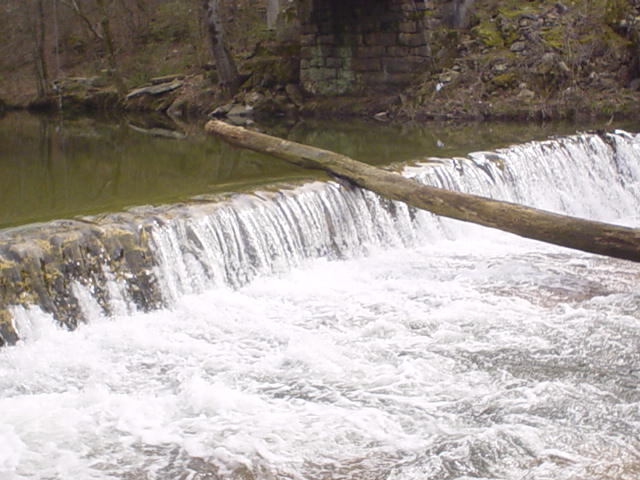 The Falls, I believe act as an enormous energy filter which purifies and cleanses many miles of the surrounding territory 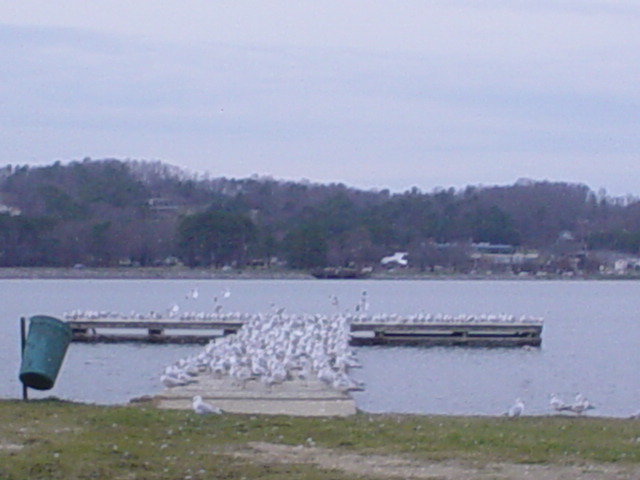 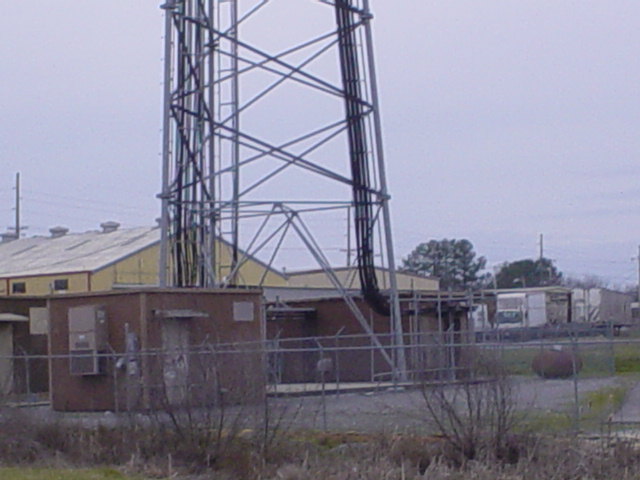 This is photo of a large tower we gifted in Guntersville during our last trip. I wanted to focus on the quantity of black cables involved. 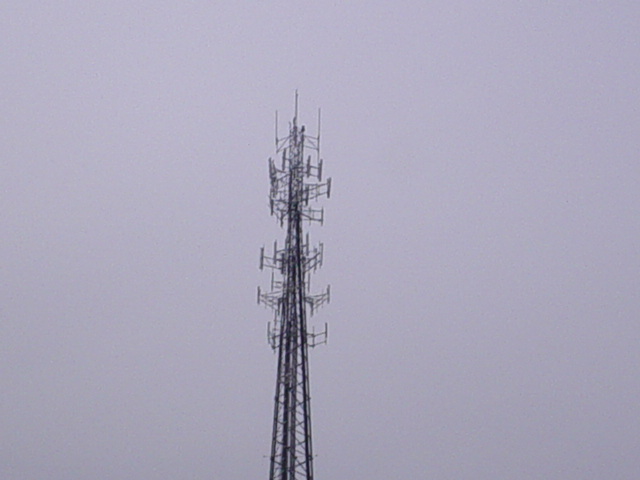 Close up (this thing is sooo BUSTED) out of 25 towers in Guntersville, this one was the biggest.

I just stuck my camera out the front door a few minutes ago and snapped a couple of pictures of the snow that is occurring over much of the south and southeast. What’s so unusual about a little snow? Well, it’s our first snow in about 5 years or so. You see, snow has avoided us pretty much so like the plague. Even when other connected areas of the southeast were getting snow, the snow would mysteriously go around us as well as the average ordinary run of the mill precipitation. This gives weight to the theory that orgonite has shut down the microwave cell tower global warming, precipitation evaporating weapons in our backyards. I believe gifting our H2O fits into the overall balance of an area. 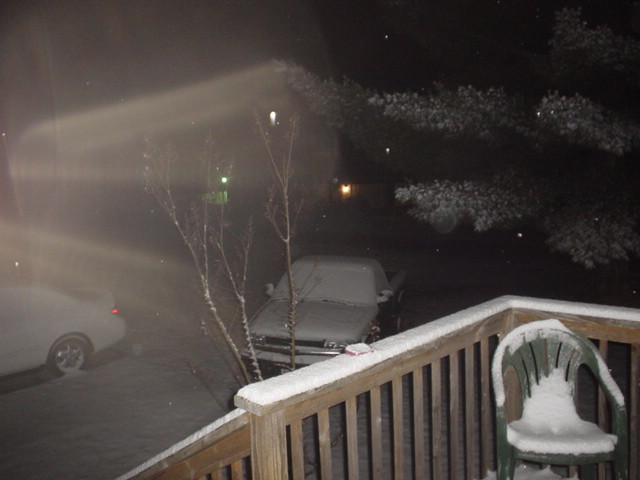 I’m not sure about the light effect on the left is, notice the large orb under the tree limb. 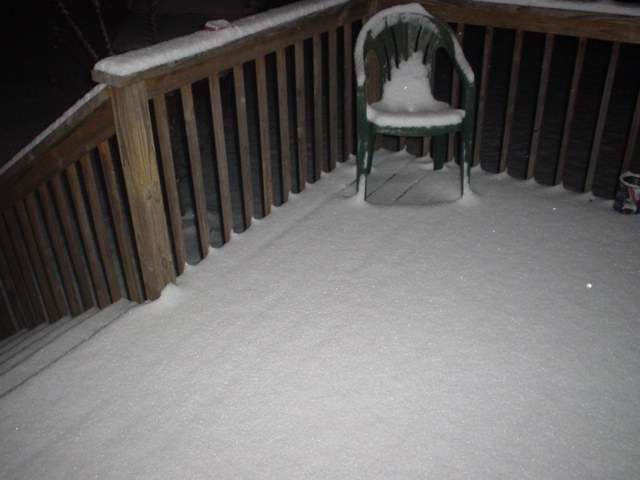 This weekend we got 100 TBs plus several larger pieces of orgonite and continued with our gifting efforts in the southern portions of the Tennessee River and northern portions of Guntersville Lake. I never realized how big these bodies of waters were until I started to pursue gifting them 100%. Just gifting these places alone is more than a worthwhile adventure. I feel these bodies of water are crucial in our efforts to maintain a positive balance for the entire area. Who knows what lies beneath the surface? 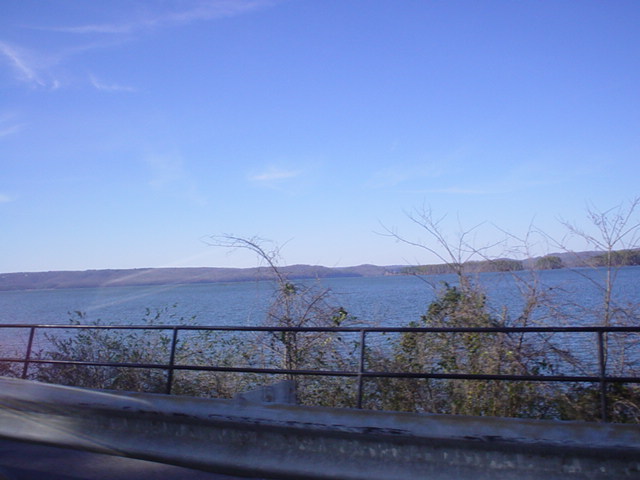 The roads and highways along these bodies of water allow us to maximize our gifting efforts without having a boat. 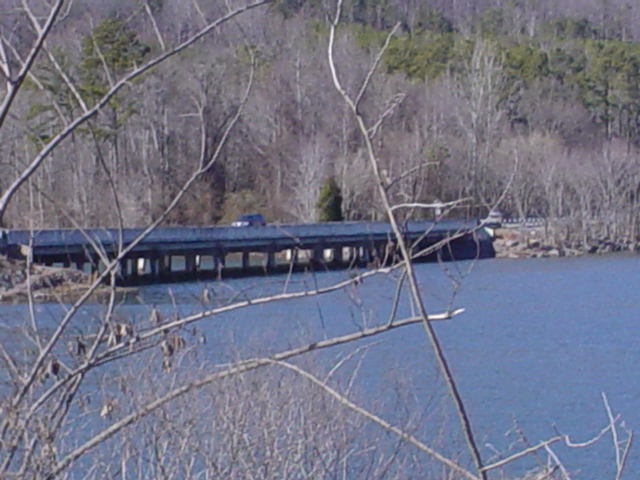 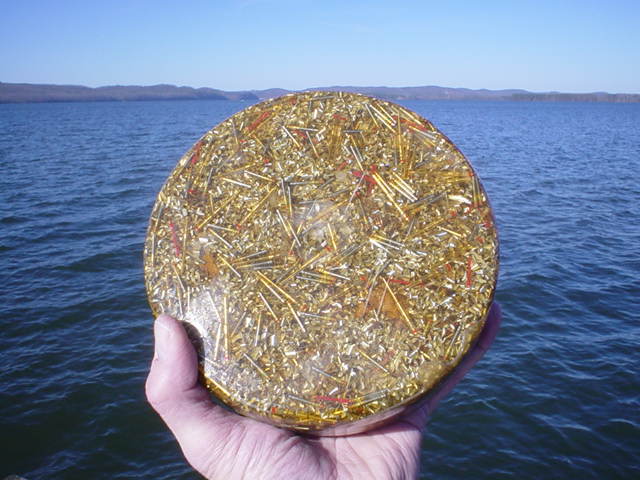 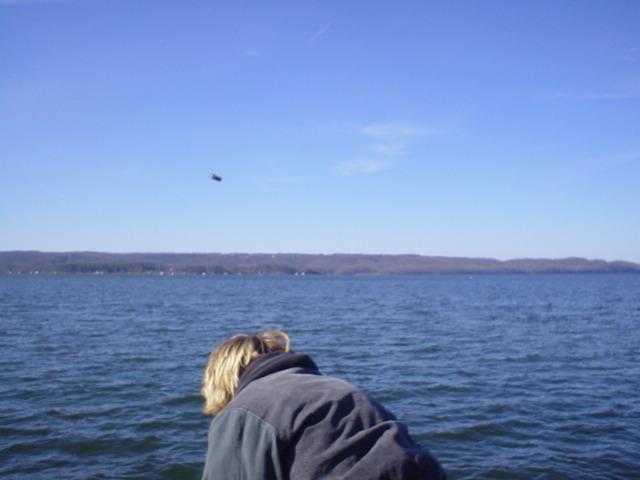 My good friend Bud Farkle launching the whale buster. No there are not any whales in these lakes or rivers just lots of ducks, fish, and other assorted wildlife.

I’ve been up here in our local hospital for over 1.5 weeks with a pretty strong case of pneumonia and will undergo surgery to run a tube in my chest to draw the fluid out and expect to go home in a few more days after this happens.

PIECE OF CAKE! Luckily, a good friend of mine lent me his laptop to update this post.

This general area with so many interconnecting bodies of water is showing visible improvement that I personally observed before going in the hospital.

My feedback along with additional feedback forwarded to me by some of the local residents who spend alot of time outdoors seems to agree. This includes clearer less polluted (unnatural looking) water with considerably less chemtrails overhead. I’ve also been informed by the local law enforcement that the number of speeding tickets has decreased by 30% over the last month on the connecting highways. We’ll monitor the situation and provide photos in the near future.

You have been a source of encouragement for me. My boosts will be with you. Take care of yourself.

We’ll do some work for you in Sunday’s chat session, Louis. You’re apparently being attacked on account of your gifting successes. Nobody who uses any zapper, even once in awhile, can get actual pneumonia and I suspect you use a zapper when you’re out busting up the world odor’s death inftrastructure. When the world odor get any of us into one of their hospitals we’re particularly vulnerable but I suspect The Operators will keep you from harm, in any case.

Great Work! We’re experiencing the mildest winter, ever, up here by Canada in the NW and I suspect it’s on account of distributing so many towerbusters in the three largest lakes in the region last fall. The atmosphere for hundreds of miles around is a lot brighter on account of that and the spew and HAARP would-be atrocities disappears faster than ever, now. We see Sylphs almost constantly, too.

When we first connected you sent us photos of your first cloudbuster, or one of them, and there were so many entities in those photos that it was mind boggling. One photo feature was the proliferation of diamond-shaped energy forms, scattered all around your CB. It would be terrific if you post those photos for the record. People who see fairies and other elementals get pretty ecstatic when a CB first gets set up in an area where there hasn’t yet been any gifting.

I entertain the notion that one of these days somebody is going to see a dolphin or whale in a landlocked body of water while gifting. I keep the ‘flying dolphin’ photo at the top of this page to remind us that things like this are possible, now, on account of the cetaceans’ adoration of simple orgonite.

We’d encountered lots and lots of undines at sea, even in San Diego Harbor by the piers, when gifting but we also spotted them in two of the three big lakes around here. This, like the Sylphs, is a sensory confirmation that’s available to everyone, even for gifters like me who are not particularly psychic or energy sensitive.

Folks, there are a handful of phenomenally prolific gifters out there, some of whom don’t care to post on any forum or leave a written account of their achievements, which saddens me a bit. Louis one of that small group who also reports his efforts and confirmations and I’m grateful that he chooses to post reports and photos on EW. He’s in a pretty big region of the US that has very few gifters in it, as far as we know, so maybe The Operators are making sure that enough work gets done through his inspired, voluntary and self-sustaining efforts.

I have included a couple of the photos I believe Don was talking about in his reply. 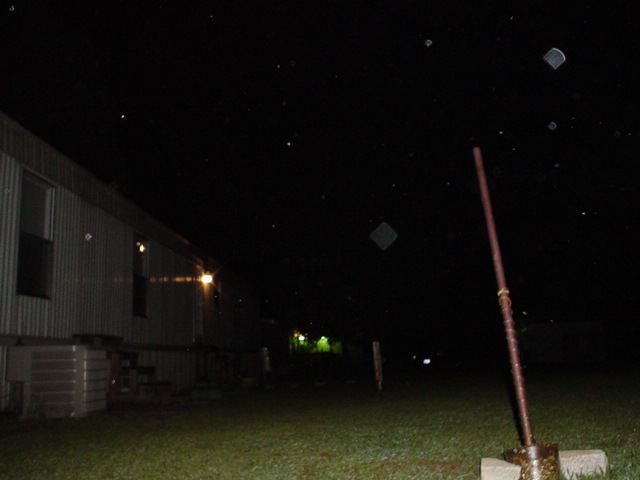 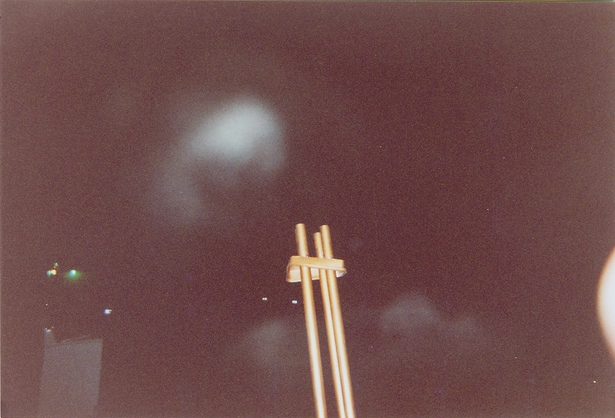 Apparitions enjoying the company of one of my first cloudbusters. 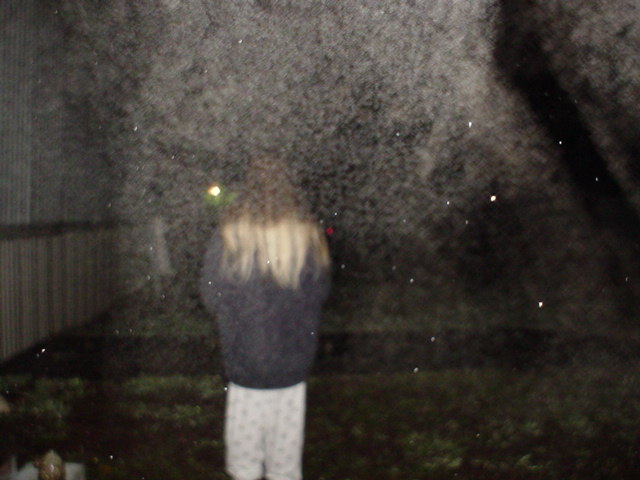 Notice the human face facing the photo taken in the upper right hand portion of the frame. To me, it looks like an older woman, with straight blonde hair. (There apear to be other beings throughout this photograph).

Louis, so you are out of the hospital?

After 2 1/2 weeks in the hospital for Pneumococcal pneumonia which sent referred pain to my right shoulder and immobilized it completely. I continue to undergo physical therapy for my shoulder.

40 x-rays, 6 cat scans, 1 MRI, and 1 upper G.I. I finally got back home yesterday evening. My plans are to completely turn this situation around in 30 days or less. Below is a photo of the incision necessary for them to run tubes into my chest which remained inside me for about 3 days before they we’re removed. My acessment: PIECE OF CAKE as stated previously. 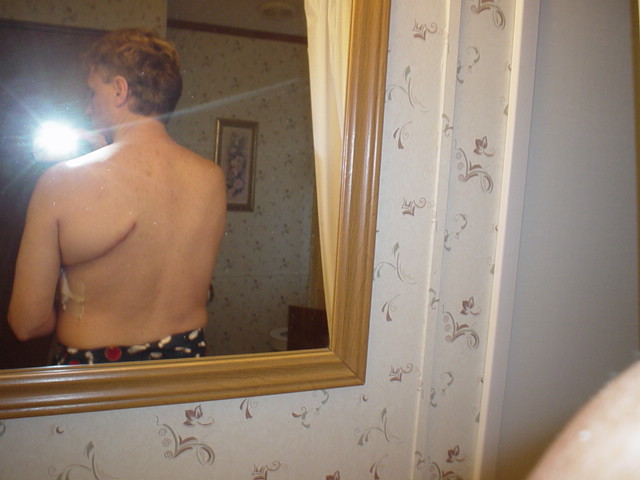 Thanks for all your BOOSTS!

Today, the entire state of Alabama is under SEVERE weather conditions. I believe I already know the outcome for everything north of Gadsden due to the gifting of the major waterways as reported in this post. I will report back here after the good news is on record to provide further validity of the power and ability of orgonite. In the near future we hope to do more gifting in Birmingham, and Montgomery. These 2 places have only been sporadically gifted in the past.

Seriously, the beauty of doing this most honorable job is being able to show people we have a very tangible alternative to ENVIRONMENTAL WARFARE!

God Bless the residents of Enterprise, Alabama in the highschool who were in the path of a rather large tornado earlier today. I understand the highschool is destroyed and there are expected fatalities.

We have never visited or gifted Enterprise, Alabama but hope to go there soon. This should prevent future tornadic activity plus stop the movement of violent storms into Georgia.

I remember looking Enterprise up on the internet a few months ago to see where it was when tornadoes had touched down.

(The places we have gifted in the extreme southern portion of our state are: Mobile primarily the weatherball, Bay Minette, Gulf Shores, Orange Beach, Foley, and a few other places in that vicinity) I heard Birmingham may be seeing some tornadic activity now.

So far our area has only received light and sometimes heavy rain out of this series of storms.

This effort has apparently been very beneficial to our region. Nothing out of the ordinary ocurred here during yesterday’s flurry of severe weather. The wierd thing is that most of the schools in North Alabama were closed, while schools in the south including Enterprise were allowed to stay open when inclimate weather was expected in our state. I sincerely hope they will revise their policies immediately to help alleviate the impact of another technological disaster. This did not need to happen under any circumstances and it makes me wonder who’s running the assylum? (You and I already know or we wouldn’t be here)

I hope to visit Enterprise in the Spring and lay to rest the problem once and for all. I believe 100 tbs will easily remedy the situation for good.

I think this may be a precursor of things to come for 2007 in the southeast. It’s easy to see that this problem has steadily neen ramping up for some months. Thay knew Enterprise would be an easy hit and the sewer rats made their move. So be prepared to go to work this and pitch in as you all ready do religiously. I am healing now contemplating my next chess moves from Huntsville as one would expect. I’m not going anywhere anytime soon.

As you can see in the photo above I am no longer VULNERABLE on my backside! You cannot hurt me.

If you want some come and get it, I’m not SHY anymore!