Tom's in the Hood -part uno

This report is in no way trying to bash Thomas Bearden if he turns out to be a good guy then he will love the orgonite we gifted throughout his neighborhood, if he’s a bad guy then the orgonite will help him to see the truth and refine his vibrational level or he will have to settle for another comfort zone somewhere else. A lot of disinformation is evidently circulating within the story about Thomas Bearden and Scalar Electro-Magnetic Energy. I will try to make my report as brief as possible, stick to the facts and show photographic proof. Thomas Bearden is a likely candidate to gift because he seems to be comfortable with the kind of information he is putting out. My part in this story began about 3 or 4 weeks ago when I received an email from a guy (that said he’s from a country overseas) who told me that Thomas Bearden Lt. Col. (RET) lived in Huntsville, Alabama. I didn’t know he lived here in Huntsville but I knew I was darn sure going to gift his entire neighborhood in the very near future when I found out. This fellow asked me to gift Bearden’s home. Mister Bearden is supposed to be an inventor of free energy devices which includes a patent on a free energy based scalar electromagnetic generating device that is supposed to supply all the power for your home and replace traditional alternating current. Bottom Line: you would never get any more utility bills. Oh Joy! Like I said up front lot of disinformation is constantly circulating from this story and about Thomas Bearden’s true position in the scheme of things. This guy wreaks of working for the CIA because no matter how deep you dig, you never seem to get anywhere. All I know is I heard they can’t seem to get the free energy device to work, but he owns a patent and I guess this is why you and I cannot make one of these wonderful devices and enjoy all the free electricity that it creates from the vacuum of space. It sounds like his generator only resides in the etheric realm! I was later informed he is against orgonite and claims all the weather control is only happening out of Russia because they have all the weather control equipment. We all know from our experiences and we have proof weather control/environmental warfare is well under way right here in the Good Ole U.S.A. 24/7 with high degrees of microwaves and scalar energy playing a big part in all the chaos, subterfuge, and downright destruction. Shortly after I received the email I forwarded it to a good friend for his opinion and left to gift other important areas nearby Huntsville. When I got back I was informed our phone was out of service (my computer too). During this time, a close relative of ours got real sick (and later died) so we left town immediately. There were not any storms and I checked if there were any outages in the area and there weren’t any that could have knocked the phone out. Four to five days later, we got back (I had forgotten all about the phone being out) but it was still not working.

2 days later I got the phone restored and I decided to take a drive and get some photos of Tom Bearden’s home which is near the middle of town. When I got there my digital camera went berserk and it still does not work. (This is a SONY digital camera about 3 years old) Bearden’s home is the second one from the last on the left side and there is a dead end at the end of his street named Big Cove. At the dead end there are woods and 2 driveways one on each side that each go up into the woods, one driveway is paved and the other is unpaved… The paved driveway (on the left) has a large boulder and I estimate it weighs 1000 pounds used to block the entrance. This keeps anyone from driving up. There was a thick steel chain stretched across the unpaved driveway that serves the same purpose. Well I got mad because my camera would not function and noticed a large cell tower showing itself over the treetops of the somewhat mysterious woods.(I wondered if it was a scalar powered cell tower device under Bearden’s control) Later on that evening when I went back to gift there was a red van with tinted windows pulled right up to the dead end which was not there earlier. I knew right away it didn’t belong to any of the resident’s because this was a pretty upscale and you might even sat Ritzy neighborhood and the sides of this van were pretty rough looking. Now I wonder what compelled someone to put this red van there at this time? In fact, I went on (June 5th about 3 weeks later) with a new camera and took pictures of some of the things I am talking about and the red van was still there! So there’s no doubt in my mind why they put it there. If it was a random broken down vehicle, it would have been towed away 3 weeks ago. But that’s okay, it just proves how important orgonite is to the other side for them to go to all this trouble to monitor our computers and try to prevent us from gifting an elite neighborhood that likely supports part of the over-budgeted network that we are in the process of dismantling. North Alabama figures into the equation very highly due to the fact we have segments of our network with approximately 30 cell tower type of weather warfare weapons within a span of only 1/4 of a mile along I-65, and I-565. Well, today is June 6th and after trying all night long yesterday to download these simple photos to no avail I went back to the Bearden’s neighborhood (because I could not get the photos to download) with my camera adjusted down to smaller lesser quality photos today and re-took several photos and the red van was gone and so was the thick steel chain across the unpaved driveway! Now I don’t know, but I think someone wanted me to go into the woods, I wonder if they thought yesterday would be my last trip so they moved the red van? Today, I found a way over to the other side of Montesano mountain to a local museum and was able to get within close proximity of the big tower near Bearden’s house and gifted it. I believe this tower may be connected with Bearden in some way because it’s only about 50 yards from his home. I think I can finally post some of these photos. Now the whole area has beautiful blue skies! 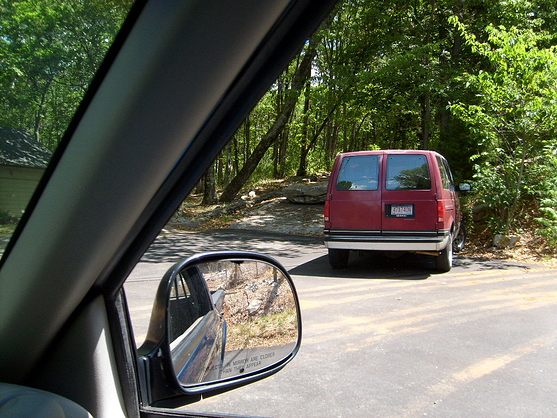 I made my first visit in the afternoon and tried unsuccessfully to take photos, later that evening I returned and this red van with tinted windows was parked at the dead end within a few feet of Bearden’s home. Notice the large rock to it’s left side. 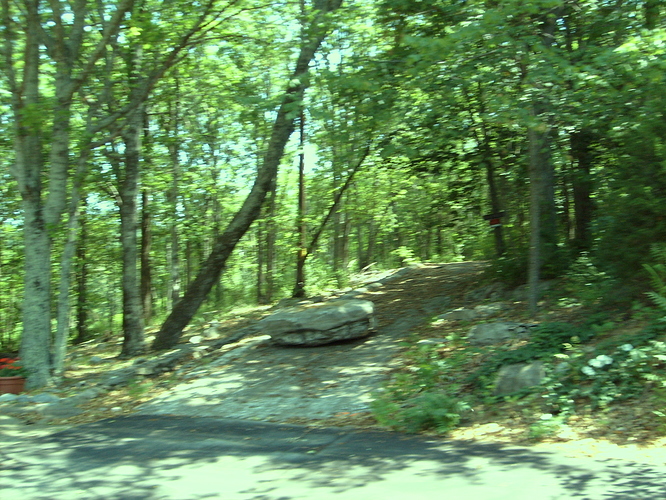 This cell tower can be seen looming over the woods by the dead end just a few feet from Tom Bearden’s residence. 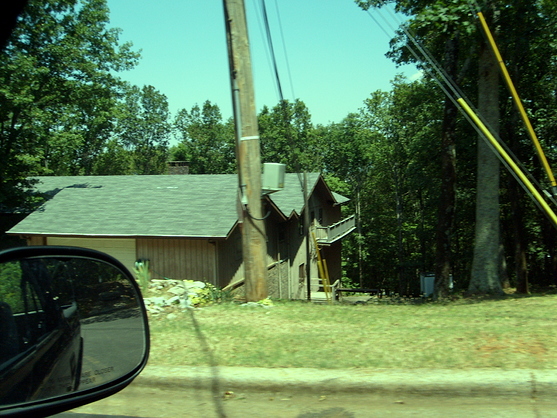