At first glance, the Tor network is similar to a VPN. Messages to and from your computer pass through the Tor network rather than connecting directly to resources on the Internet. But where VPNs provide privacy, Tor provides anonymity.

A VPN service can keep outsiders from seeing where you go and what you do on the Internet, but there are ways to defeat the privacy they give you. By its nature, a VPN service has access to information about you. You have to trust them to protect that information.

Since both Tor and VPNs perform similar functions, you might wonder, “Is Tor really just a specific type of VPN?” The answer is, “No.” Here’s why:

A VPN is a network of servers that protects your privacy by encrypting your messages and hiding your IP address. Your VPN provider controls both the VPN software on your computer, and the servers in their network. You have to trust your VPN service to protect your privacy when you use their network.

Tor is a network of servers that you communicate with anonymously. No one organization controls both the Tor software on your computer and the individual servers in the network. You don’t need to trust anyone to use Tor safely. As much as anything else, the fact that you don’t need to trust anyone when you use Tor is what makes it distinct from a VPN.

How Does Tor Work?

The Tor network is designed so that no server can know both who you are and what you do. The network consists of thousands of independent servers run by volunteers around the world. Here’s what happens when your computer wants to send a message using the Tor network: 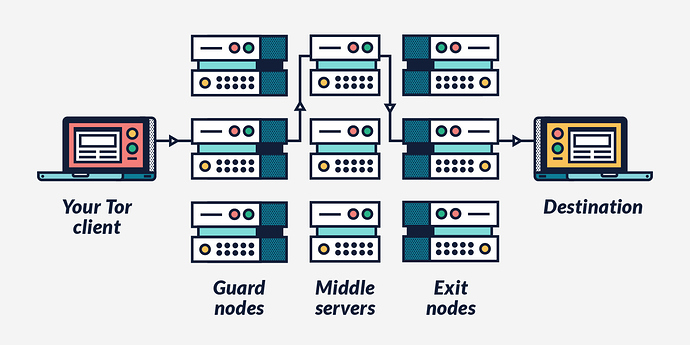 This is key to understanding Tor so let’s look at what each server in the path knows.

No one server knows or can know both where the message came from and what it says. This is how Tor provides anonymity.

The way messages are routed within their networks is another key difference between VPNs and Tor.

Tor uses Onion Routing, a more complex approach. Onion Routing requires the message to pass through at least three, randomly-selected Tor servers before it gets sent to its final destination. Before the message leaves your computer, the Tor software encrypts the message multiple times. The effect is to give the message layers of encryption that must be peeled, similar to layers of an onion.

As the message passes through the network, each server decrypts one of the layers. When the final server in the path peels away the final layer of encryption, it exposes your original message, and forwards it to its destination outside the Tor network.

As a result of the encryption and the way Tor servers pass messages between each other, none of the three servers can know both who sent the message, and what the message says. This makes you anonymous within the network. To further protect against bad actors trying to hack the network, the Tor software in your computer chooses new server to use approximately every 10 minutes.

Using Tor to connect to the Internet offers several advantages over an unprotected connection. 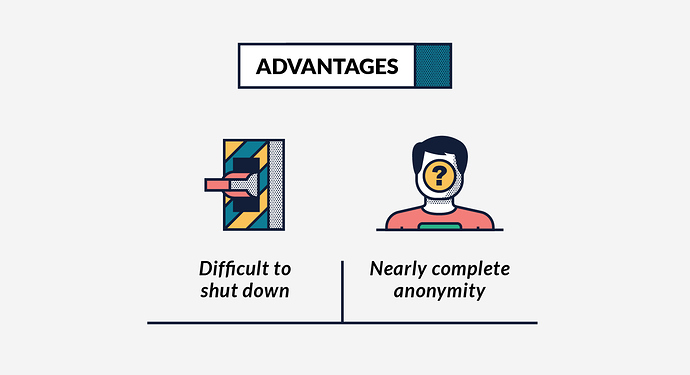 Difficult to shut down
Because it is made up of thousands of servers scattered around the world, Tor is very difficult to shut down. The network is distributed, not centralized. That means there is no headquarters, corporate office or main server to attack.

Most Tor servers are run by volunteer privacy advocates. To shut down Tor, you would have to go after each individual server in the network. This makes trying to shut down Tor about as practical as stopping P2P music transfers or shutting down Bitcoin.

Nearly complete anonymity
There are ways Tor can be attacked, but the people of the Tor Project are constantly working to make Tor safer. While no person or network can guarantee you 100 percent anonymity, Tor provides you much more online anonymity than even the best VPN.

While Tor is a great system for using the Internet anonymously, it isn’t a perfect solution. Here are some disadvantages to using Tor. 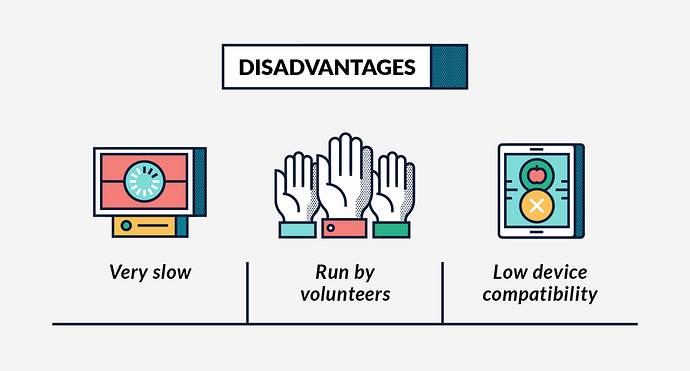 Very slow
Messages in the Tor network go through three (or more) widely-dispersed servers and get encrypted and decrypted at least three times. As a result, the Tor network is very slow. Using it to stream videos or for peer-to-peer file sharing would be very difficult.

Low device compatibility
The Guardian Project maintains Tor on Android devices. Currently, the Tor Browser is not available for iOS, meaning you can’t use it on your iPhone or iPad.

When Should You Choose Tor over a VPN?

You’ve seen the kinds of situations where you should use a VPN and may be wondering, “Why would I ever use Tor?” The truth is, most people don’t need Tor at all. A VPN is sufficient for the vast majority of situations. So, when should you use Tor?

Tor is the tool to use when the stakes are high. Maybe you are a journalist reporting on some government atrocity. Or activist organizing a protest in some repressive country.

In these cases, your liberty and your life could be at risk. A third party may be able to lean on a VPN service to get information about you. But only a few organizations in the world have the power to even attempt to track you down through Tor.

Additionally, there are a several benefits of choosing Tor , including: