Were these species immortal prior to the Ether's degradation to some specific level, after which "Death" manifested itself in those species?

“I haven't celebrated coming in No. 2 too many times.”


Jellyfish are doing great, these days. I believe that jellyfish are a "canary in the coal mine", a species very sensitive to the health of the Etheric environment.

And I think I better understand why.

Jellyfish have no brains or nervous systems.

Yet one species of jellyfish has eyes. 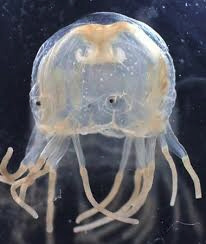 "Tropical-dwelling box jellyfish have a cube-shaped body, and four different types of special-purpose eyes: The most primitive set detects only light levels, but another is more sophisticated and can detect the color and size of objects."

As a sidebar, I'd ask someone to explain how, from a Darwinistic perspective, only this single jellyfish species evolved to have eyes. Wouldn't it be to the benefit of all the jellyfish to have assimilated that trait?

But I digress. If jellyfish have no brains or nervous systems, what are the eyes connected to?


I asked my eye surgeon wife that question, and she paused a moment, then said "maybe jellyfish are one big brain". I said "made of what?" Then I answered my own question. I'm mentioning it so that she gets credit for the discovery.

Western science steadily claims that nothing but neural electricity runs down the body's myelin-sheathed cables that we call "nerves". And that the Ether does not exist, and that subtle energy does not exist.

Psychics can see and sense the human body's network of subtle energy.

Humans have an aura. Most people can't see it with your eyes, but it's there. Psychics can actually see it. It can be photographed with Kirlian photography.


The jellyfish proves the existence of the Ether because the jellyfish has no nerves, no cables to run the jellyfish's electricity-based transmission signal into its also-nonexistent brain.

The only creature that is acknowledged to be biologically immortal is a jellyfish.


But not all jellyfish, but rather just one, single species of jellyfish. 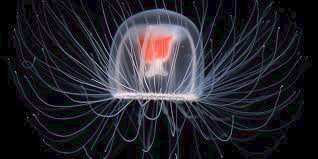 "Only one animal is known to have this remarkable ability: a species of jellyfish, Turritopsis dohrnii, first discovered in the 1880s in the Mediterranean Sea.

These tiny, transparent creatures have an extraordinary survival skill, though. In response to physical damage or even starvation, they take a leap back in their development process, transforming back into a polyp. In a process that looks remarkably like immortality, the born-again polyp colony eventually buds and releases medusae that are genetically identical to the injured adult. In fact, since this phenomenon was first observed in the 1990s, the species has come to be called “the immortal jellyfish.”

How did that happen, Darwinistically? Why wouldn't it be to the benefit of all the jellyfish to have assimilated that trait?

Essay: explain the steps and stages of the Evolution of Trritopsis dohrnii, "the immortal jellyfish", and identify what uniquely led it to be completely different from every other jellyfish species.

Coincidence Theorists may check "a genetic mutation" and move to the next question.

There are 200-plus year-old whales.

Were these species immortal prior to the Ether's degradation to some specific level, after which "Death" manifested itself in those species?

An Orthodonist from New Jersey named Jack Cuozzo did growth analysis on original Neanderthal jawbone fossils and determined that the individuals were two hundred to three hundred years old when they died.

I've previously speculated that the great lifespans of the Neanderthal Patriarchs of the Bible's Old Testament were the result of a higher quality Etheric environment than that present today.

But it may be, rather, that the pure-bred Neanderthal lived 900 years, and that its lifespan continued to decrease as it mated again and again with other races.

But the British Royal Family, which is as close to a pure-bred Neanderthal bloodline as you are going to get, don't live to particularly great age, really, not beyond everyone else. Maybe that's where the dust has settled for the species. They've had to make those concessions as the ruling bloodline, but they are the ruling bloodline.

It may be that both are true, to some extent. True that the Neanderthal race's lifespan was, indeed diminished via interbreeding with other humanoid/hominid species that were less long-lived. And true that all life forms had their lifespans shortened to a certain extent by a general decrease in the health of the Etheric environment from that time to this.

Recent examples of increasing longevity which I've catalogued in previous articles indicate that the health of the Ether plays a huge role in longevity.

I've concluded that discussion of "Sasquatch" and "Lake Monsters" are forbidden by western science because those creatures are interdimensional in nature. They 'wink in and out of existence' from our perspective.

I've documented "normal species" doing that, recently. Whole groups of animals suddenly back in place where they'd been absent, previously.

This is obviously a research and development document.