“The cheaper the crook, the gaudier the patter.” 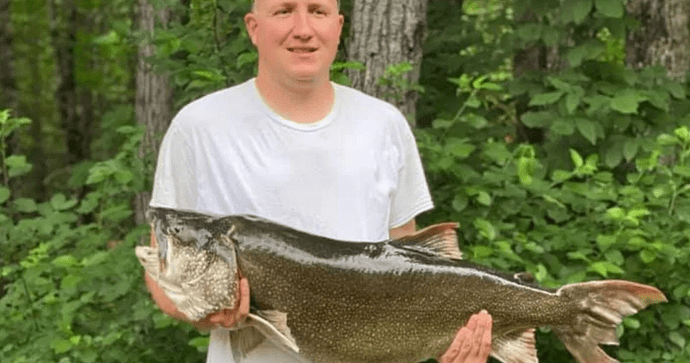 (Erik Poland of Andover shows off the 39.2-pound lake trout he caught while fishing Lower Richardson Lake in western Maine on July 2, 2020. The fish broke a 62-year-old Maine state record for the species.)

It’s July 2020, and great positive changes are underway at every level of our reality. They began in earnest in 2012, and have been increasing in speed and magnitude. I’ve been writing articles on the subject since 2013.

These changes are being driven by the collective influence of untold thousands of inexpensive Orgonite devices based on Wilhelm Reich’s work.

Since Don Croft first fabricated tactical Orgonite in 2000, its widespread, ongoing and ever-increasing distribution has been collectively unknitting and transforming the ancient Death energy matrix built and expanded by our dark masters, well, all the way back to Babylon and before. And, as a result, the Ether is returning to its natural state of health and vitality.

One of these changes is fish growing larger than they ever have in history.

For example, a news story below from two days ago, from Maine, is headlined “Andover man shatters 62-year-old state record reeling in 39-pound lake trout.”

Where, under the false guise of familiarity, the author has omitted the name of the state, to make the subject drastically less searchable.

The author’s name is John Holyoke.

John sets the tone in the article by saying “Man, did he get lucky.” That’s to play like it was luck, versus the truth, that state fish records are falling by huge margins regardless of geography.

He say that “The fish was 44 inches long and weighed 39.2 pounds, breaking the 62-year-old previous record by more than seven pounds .”

John has used the hedging generalities " shattered " and " by more than seven pounds " in an effort to blunt the impact of the huge margin between the records. And, while he provided the weights of the old and new record holders, he carefully hedged again by omitting the percentage increase between them. So I had to do the math.

Regular readers can see that the careful tradecraft Agent Holyoke is practicing is identical to that of his peers, whom I’ve featured in these highly repetitive articles almost every day for the last seven years.

I’ve included so you could get a better idea of what a generational Satanist in a position of marginal influence looks like.

In intelligence parlance, John has been “made”. His cover is blown. It costs a lot of money, takes a lot of time, to get an agent in place. And they don’t grow on trees, either; these guys and gals are all related to one another by bloodline.

This is the beginning of the end for them. And it won’t take long. When cons collapse, they do so in a rush, like a house of cards.

Such records are usually broken by tiny margins, as organisms grow in progressively smaller increments as they approach their maximum possible size. Here the record stood for over sixty years, and then was suddenly broken by a huge margin.

There’s clearly been some great positive change in the environment of the Lake Trout in Maine.

That unmentioned positive change is Etheric, energetic. The Orgonite-driven improvement of the Etheric environment in Maine has led lake trout there to grow larger than any previously seen in the history of fishing in the state.

There’s an international news blackout in place on the subject. Because you’re not supposed to know that the primary driver of the size and longevity of any organism is the health of its Etheric environment.

When Erik Poland headed to Lower Richardson Lake in Township C on July 2, he didn’t intend to fish for lake trout. In fact, he didn’t really plan to fish for very long.

“I had a couple of hours to kill,” the 34-year-old Andover man said. “I thought I’d fish for salmon for awhile, go for a swim, then head home.”

But after seeing no sign of salmon near the surface on his fish finder, he decided to drop his lead-core line deeper, and try his luck for lake trout, which were showing up near the bottom in 94 feet of water.

Poland let out 15 colors of lead-core line — each color is 10 yards long, which allows an angler to gauge how deep they’re fishing — so he could target the bottom-dwelling fish. And his only strike of the day resulted in an epic battle that culminated with him landing a state record lake trout, or togue.

The fish was 44 inches long and weighed 39.2 pounds, breaking the 62-year-old previous record by more than seven pounds .

The previous record was set on Aug. 3, 1958, when Hollis Grindle of Ellsworth landed a 31.5-pound togue while trolling Beech Hill Pond in Otis.

Poland said he’s not sure how long he battled the fish, which kept making long runs.

“I can’t even dare to guess how many times it ran line out on me, and then I’d reel it back in,” Poland said.

Poland, who was fishing alone, said his previous best togue weighed about 10 pounds. This time, he wasn’t really equipped to catch anything much bigger.

His fluorocarbon leader was rated to handle just 8 pounds, and he had attached a two-inch DB Smelt lure to the end of it. And his net was too small for such a big fish.

So when he finally reeled the fish to the surface and it flopped onto its side, Poland decided to land it with his bare hands.

“It felt like two days, but [the fight] was probably an hour or an hour and a half, tops,” Poland said. “I walked it up to the back of the boat, looked at my 18- to 20-inch net and quickly kicked that to the side. I knew that was going to create even more problems. It was half the size it needed to be. So I just grabbed it by the gill plate and hauled it up over the stern of the boat.”

Liz Thorndike, a Rangeley region fisheries biologist for the Maine Department of Inland Fisheries and Wildlife, said the fact that Poland successfully caught such a whopper set an example for other anglers.

“Erik wasn’t even fishing for togue. It just goes to show you to catch this fish of a lifetime , you just have to be on the water,” Thorndike said. “You just have to go fishing.”

Poland said another nearby angler, Nate Robertson, rode over to watch the action, and tossed a hand-held scale aboard so that Poland could weigh the fish. Neither man knew what the state record was, but both knew it wasn’t 39 pounds.

After heading ashore, Poland found a certified scale that gave him an exact weight.

Poland said he’s still looking for a taxidermist, and says he’ll put the mounted fish in his house, where it’ll stay forever.

But he said he doesn’t keep many togue, and considered releasing this one, even after seeing how large it was.

“It was kind of bittersweet with this one. There was a fleeting moment where I really wanted to put it back,” Poland said. “But ultimately, I would have been the biggest liar in the world if I had. Then it really would have just been a fish tale.”

The previous record has become a favorite part of Maine fishing lore. According to an account that ran in the BDN two days after the 1958 record-breaker was caught, Grindle was fishing with friend Bernard Lynch.

“Lynch broke the ice by landing the day’s first fish, a 9 1/2 -pound lake trout,” wrote the BDN’s Bud Leavitt at the time. “The two fishermen were trolling with deep rigging, lead-core lines, 30-foot monofilament leaders with bait harnessed to a number two sewing hook. Grindle felt his line go taut in 60 feet of water opposite ‘The Ledges’ and in an area where deep-trollers often find the end of the rainbow.”

Grindle said he wasn’t even sure he had hooked a fish.

“I couldn’t move this thing, so naturally, I figured I was [stuck] fast to the State of Maine,” Grindle said.

The Maine record has stood ever since, with relatively few reported close calls as would-be record-setters wound up just a bit shy of eclipsing Grindle’s mark.

Among the more well-known is the 29.67-pounder that Bill Maynard Jr. hauled out of Moosehead Lake back in 2009.

It took Maynard five hours to get that fish to a certified scale, which led many to believe it had dried out enough to cost him the record.

“Everybody who knows fish tells me that one was 34 pounds, anyway [when it came up through the ice],” Maynard said at the time. “But like I said, he just bled and drained [for hours before it was weighed on an official scale].”

Though a few days have passed since Poland’s memorable fishing trip, he said he hasn’t headed back to Lower Richardson Lake to try his luck since then.

Since word of his record fish has begun to make the rounds, he doesn’t think that would be a great idea.

“Can you imagine what kind of a zoo that place is now?” he asked with a chuckle.