from australia and much further along than Mylow.

Thank you Mark , I already saw this video one or two years ago and I don’t know what happened after that.

This is another link which was posted some days ago, but seems to be already oos on Chris Brown coils which could be another overunity system

I saved it and Iam trying to post it right now…. but …not possible… Ale, ajuda por favor!

but no pics again but the links work

I’ve been in communication with Chris W. Brown (rainmanp7) for about a month. He occasionally sends me video links, which I’ve not been able to make sense out of, and I’ve not had time to ask him about them.

Today (April 15, 2009), despite being super busy, my interest was piqued when he Skyped me with the following message:

“I’m about to blow everyones mind lol. I just made my overunity 1st power station in small form! and it works, and has a self adjusting power charging system. It can power 2 110 Volts house outlets, and it has KML stuff all over it. It’s been in operation for over 6 hours now, and the battery is still holding above maximum charge. It’s charging itself and giving off power and creating power as needed through the power inverter. […] It’s replicatable at every level.”
I got on the phone with him for the first time, to ask more about what he had. He said he had been powering a television for several hours with his self-looped system. He said it ran nearly 7 hours in all before the system shut down because the battery input dropped below the threshhold required by the inverter.

In the overunity community, we say that the ultimate test of feasiliby and arrival is when a system pulls enough power from a free energy source (aether [inexhaustible, ubiquitous energy all around us] in this case?) to keep itself running, and provide excess usable power for other things, thus providing base load generator capability.

In this case, the "antennae" for harvesting aether is so ridiculously simple that the human tendency is to immediately dismiss it as preposterous. But it also makes it super easy to replicate and prove or disprove.

What is the key ingredient? A regular copper wire wound in a fairly simple coil – so easy that an elementary school student could wind it.

He calls these “KML coils”, drawing from some of Faraday’s equations.

This TV set-up is something he pulled together in about an hour (he already had the KML coils made). Its off-the-shelf ingredients include one 12-volt lawnmower battery by Exide that cost around $24; a “Smart Charger” by Black & Decker that costs around $30 dollars, and an 800-watt inverter by Kawasaki that costs around $34. We’re talking around $88 dollars in equipment that is readily available.

Before today’s experiment, Chris has been attaching the KML coils to batteries in vehicles, and apparently it has been increasing power and performance.

I know, this all sounds crazy. But hey, we specialize in crazy. See if you can’t prove it right or wrong, not with a textbook, but with a 14-gauge wire, a battery, a charger, and an inverter.

If you are able to replicate this effect (or not), please note it in the Replications section below.

Chris is willing to let someone come in and validate/verify what he has set up. Let me know if you live in the area and could do this for us.

Aether > KML Coils >
Chris Brown’s Own Measurements Show No Change In TV Setup – Last week, Chris reported that he had run a television on a KML Coil system he devised, and that the duration seemed much longer than what would be possible without the KML Coils. Today, his first before/after control test concludes that the KML Coils are not contributing anything to the system. (PESWiki; April 23, 2009)

Official Websites
Chris does not yet have a web home for this technology. We’ve invited him to call this PESWiki site home. He wants to open source this.

http://www.youtube.com/user/rainmanp7 – his YouTube channel
Plans
How it Works
How to Make a KML Coil
Use AWG 14 gauge copper wire, insulated. (Preferably red for positive, black for negative).

Cut about 1’ of wire.
After about 4 inches, wrap the wire up the shank of a screw driver, leaving 4 inches of wire left.
Slip coil off screwdriver.
Thread the remaining 4 inches from each end through the coil so they protrude out the other side.
When attaching the KML Coil, strip off the insullation from enough of the end to make good electrical contact. The better contact the better the performance. (e.g. soldering is better than twisting and wire nuts).
Principles

The more turns, the more power.
Thicker gauge = more power.
The counterclockwise-wound coil is considered “positive”
The clockwise-wound coil is considered “negative”
Positive and negative sets need to have the same number of windings.
There need to be at least 6 turns in the coils.
The coils should be kept at least 3 inches apart from one another (not necessarily the case
When two are three are going into the battery terminal together, they should approach from different directions, e.g. 90-degrees appart.
He uses red electrical tape to mark the positive coils, and black electric tape to mark the negative coils.
He said he’s found that the coils seem to work better when electrical tape is wrapped around the coil (like a cylinder).
He measured his screw driver shaft at 6.24 mm using a digital caliper.

The above diagram is not a mirror image of the photo, but does describe its elements, according to Chris.

Additional Info
Videos
Chris’ 1st Small Home Power Station
This information is being held back for specific reasons at this time April 14, 2009)

Chris said that 34 cars in the Phillipines and 16 vehicles in India have the KML Coils installed. About 9 have installed in the United States so far.
Chris Brown’s Test: No Change
Chris Brown’s Own Measurements Show No Change In TV Setup – Last week, Chris reported that he had run a television on a KML Coil system he devised, and that the duration seemed much longer than what would be possible without the KML Coils involved. Today he completed his first before/after control test which concludes that the KML Coils are not contributing anything to the system. (PESWiki; April 23, 2009)

Erwin Rem: Some Improvement
Rembo1, 19 April 2009, first two small coils:
Battery power 4,61 volt without a load. After connection of the coils almost immediately gaining 0,2 volt. After that steady up by 0,01 volt at the time. Until 4,93 volt. Next morning it was 4,97 volt. Something seems to happen… Made bigger coils. Didnâ€™t seem to matter, no bigger voltages. Included the coils in a Bedini schoolgirl circuit. No spectacular changes. I should search with an oscilloscope if the strange pulses of the Bedini wheel can be enhanced by these coils. Using the Optimate automatic charger with the coils on the power-in connection didnâ€™t gave a charging output. So far for a little replication attempt.

Rembo1, 20 April 2009:
Purchased a Proplus inverter and made new coils out of 60 cm, 1mm thick wire leaving 6 cm each side through the core. Build the power loopback circuit. As you could read out of my previous voltages, Iâ€™m usually using â€œdeathâ€? batteries for my experiments. Now because of the inverter Iâ€™m using a working one. 12,43 Volt to start with. 12,20 Volt when powered on. Dropping rapidly to 12,11 volt and stabilizing. Charging until 12,14 volt but now after an hour itâ€™s back at 12,11 and running. It is a small motorcycle battery and Iâ€™m surprised though that it delivers 220 volt for this long!

Arthur Manelas: No Change
On around April 18, 2009, Arthur Manelas said he tried setting up something nearly identical to what is reported on this page, with a KML coil, a battery, 700-Watt inverter, and charger, and saw "no change" from the control.

I had to correct this part so here it is. This way people can see certain videos and dig through them all by subscribing.

1 the small test power station with them on it

5 making the wire so you can connect to a non resistive source such as a spark plug. to gain more power and cleaner burn overall. http://www.youtube.com/watch?v=CjRoHBq8 … re=related

“The more you place on a vehicle the more of a effect will take place all over. I know someone that has placed around 46 of them on 1 vehicle and he says it’s just like a race car and still saves gas”

" Please help free Paul Pantone " replicate the geet if you like. It does work…. His support group page can be found here -> Geetfreinds " To find out more about gas saving Ideas I seriously suggest looking into the geet and hynow retro kit The geet working version people that have allot of great things to offer concerning this great technology can be found here -> VortexHeatExchanger "

The kml coil helps get rid of the hesitation and misfiring with peoples different design applications.

These wires can be used for anything that has power flow and that sits on a open or closed circuit. They are pulled tightly together to hold there form and Electric tape is applied on the KML Coil itself. When I first read about Faradys law I always wondered why no one put the ends through the middle and out opposite directions.

"I found this through the plasma ball testing it with a digital multimeter for amps. I found them when i crossed the leads from postivie and neutral and inline but not flowing as much. "

Open Source Caveat
In open sourcing this design, we only request that if you go commercial with it (selling plans, kits, or finished units in volumes of 5 or more), that you include a 5% royalty to be split two ways between Chris and PES Network, Inc. (which is coordinating this project here). There is no patent, and there is no copyright on the contents of these PESWiki pages, so this request is one that is not enforceable. But out of an appeal to ethics, we expect that you honor the request. Contact PES Network, Inc. to work out reasonable licensing arrangements.

http://groups.yahoo.com/group/KML_coils – A forum for the project to replicate, characterize, optimize, commercialize the KML Coil

Choose a language to translate this page! 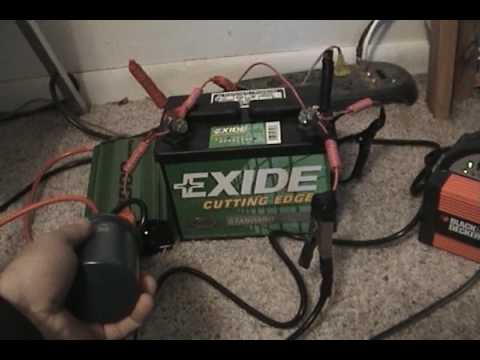 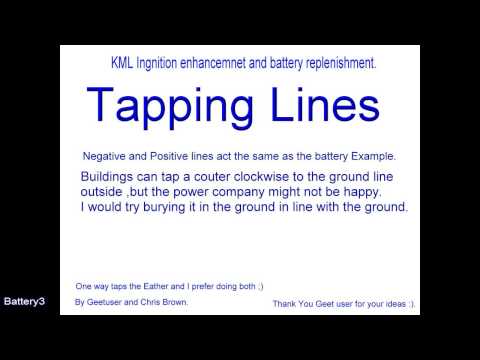 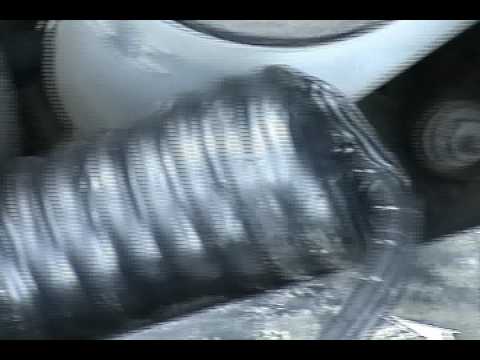 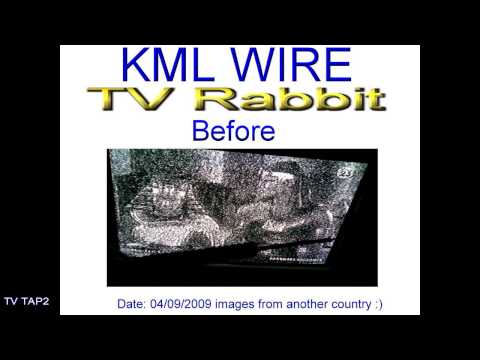