Healing with Biomagnetism and Qi (orgone)

In the first half of the nineteenth century Dr. Karl Ludwig Freiherr von Reichenbach found that there is a connection between electromagnetic force and qi (which he called “odic force” and which is here often termed orgone). He found that qi was generated by magnets, but not vice versa, and that qi was also generated by a number of other non-magnetic substances, such as quarz crystals.

In November of last year (2010) I was invited to Bogotá to observe the application of three separate medical procedures, non-standard in the US at this time, but none-the-less effective. The one relevant here had to do with what is at present frequently referred to as biomagnetism. Doctor Isaac Goiz Duran pioneered this method in Mexico City over a number of years and has documented many thousands of successful treatments.

As it was explained to me, a physical ailment corresponds to two related places in the body: one of which shall here be referred to as positive, and the other negative. Dr. Goiz has compiled an extensive list of the location of these positive and negative places for various diseases.

The instruments of the treatment consist of a pair of strong magnets, preferably discs of an inch or more in diameter – I prefer a size about 1.25" in diameter with a thickness of 1/8 of an inch. The ones I saw in Bogotá were neodymian magnets. Because of their strength, it is dangerous to handle them unclad, as they can snap together with sufficient force to break the skin and/or cause blood blisters on ones fingers. The ones I saw in Bogotá were clad in leather (by a shoemaker), and when I returned home I got the local shoemaker to clad several pair for me. I have also embedded some in small pieces of plywood with screws, the plywood having handles so that they can be applied to ones own body more easily. 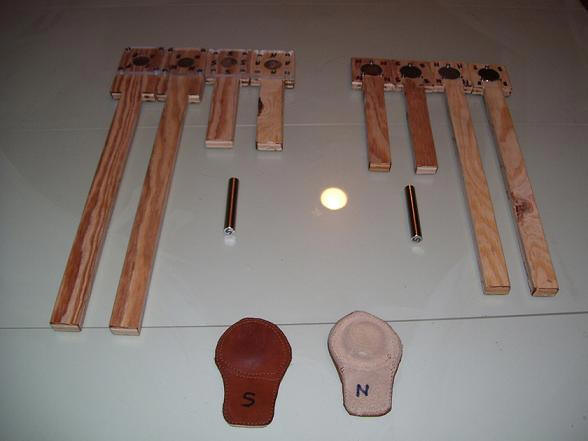 I was told by the doctor in Colombia that after identifying the positive and negative locations for a particular ailment, the south pole of one magnet should be applied to the negative position, and the north pole to the positive position. Then the magnets should be left in place for five minutes.

What I observed happening during such a treatment was the following:
(1) when the magnets were set in place, almost immediately a circulation of qi began along a circuit through the body, a ciruit which passed though both the negative and positive locations;
(2) a vortex of whirling qi appeared on each magnet separately;
(3) the circulation would continue from a half minute or so, up to three or four minutes, depending on the particular ailment and its severity;
(4) at some point the circulation would slow down, and come to a stop – the whirling vortices on the magnets slowing and stopping at the same time;
(5) when the cirulation ceased, a concentration of qi would occur at each of the positive and negative locations;
(6) these qi concentration would then move through the body, more or less directly towards one another, and when they came together, there was an etheric “pop”, which if a sensitive observer were following with his mind, he would experience a pleasant etheric “schock”.

Since returning home I have applied the method to a number of friends and acquaintances with various ailments, particularly with those relating to muscles, joints, and tendons. I have found that palpable relief usually comes immediately after the treatment, and with serious conditions such as “trigger finger”, the condition can greatly improve after daily treatments of several weeks.

For a particular ailment of course, the difficult part is to identify the positive and negative locations corresponding to that ailment. The negative spot is the easier to find, for it most often occurs where there is pain from the ailment. So the south pole of one magnet is placed over the sore spot: think of “S” for south and “S” for sore. If one can feel qi and its quality with ones mind, he will feel an uncomfortable feeling at this place, since the qi is negative or “sha” qi. At the positive point, the feeling is comfortable to the mind, as the qi is positive or “sheng” qi.

When the south pole of one magnet has been placed on the negative point, the positive point becomes more intense and, if ones mind is sensitive to such things, he can then identify it more easily. Of course if one is not sensitive, finding the second point can be a problem, but Dr. Goiz’s list is then available for many diseases.

One of the most common ailments to which the human body is subject is back pain. Fortunately in that case the positive and negative points can usually be found without much difficulty. The negative location is the place on the back where one feels the pain. The positive location is often at the place on the front of ones body, just opposite and perhaps a little below the negative location. I have found this to be true especially for pains occuring along the spine – the corresponding positive locations are then on a vertical line through the navel, the height being usually just a little below the height of the pain on the spine.

Laozu Kelly, a gifted energy sensitive who advanced our understanding of orgone and orgonite