Placement of TBs underneath the bed, and stacking TBs

Do you think it would be beneficial to place about 10 of these under one’s foam mattress for improved restorative sleep?

Also if you stack two or more on top of one another does that increase the potency?

It depends on the environment and the person, some people can find laying directly above orgonite can be energising and disrupt sleep, while others find it restful.
I think that ten TBs under a mattress is a little too much, but by all means give it a go. Generally one or two should be sufficient. You may wish to try having them slightly to the side if directly underneath is too energising.

Its advisable to have orgonite at bedside tables or shelves, the majority of people find them calming and beneficial to sleep when sleeping next to orgonite.

Stacking TBs on top of each other, or placing them in close proximity to each other doesn’t increase increase potency, just increases the processing capacity in the area with multiple TBs instead of one.
The only arrangement of TBs that seems to give more than the sum of their parts is when 6 are arranged in a hexagonal formation. People have used these outdoors, often buried, to change black lines into positive lines. 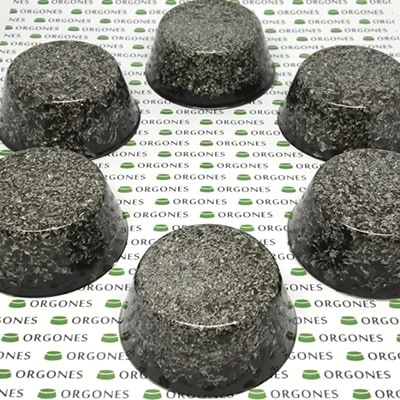 Some further reading regarding the 6 TBs hexagonal arrangement can be seen here:

Cesco and I owe many thanks to John and Rich for there wonderful hospitality during our brief sojourn in England, and for picking us up at the airports and driving us to vortices about Herefordshire. John’s place is like no other we have seen. It is if it were taken out an illustration of a fairy tale book, or as if one were taken back to England of the 10’th century. When Rich and I arrived the first day at John’s place, he took us on a short tour of the place, and toward’s evening we got to …

Try surrounding the place with 6 TB’s in a hexagon – very powerful sacred geometric arrangement. They can be small TB’s – 2.5-3oz size. In 3’s is also pretty powerful – same for EP’s. I’m not so sure the shape of the TB is super important. Its too small on its own to have a geometric variance cause any major difference I’d think. Keep it simple and where you need more “horsepower”, 3 in a triangle surrounding a target or 6 in a hexagon out a ways (couple blocks away from the target) to surround…

I have put a page up to the Laozu’s and McGinty’s 6 TB arrangement that busts black lines http://www.whale.to/y/black_lines.html/a&gt This IMO is one of the Holy Grails of geopathic dowsing, I never had any faith in copper rods or the stone arrangement my dowser used to use. The main dowser of lines in the UK tells you to move house if you have one on some bad lines! Also with the long history in the UK you can get lines going through burial grounds which are all over the place, often right …