Vaffanculo Day in Italy, September 8--a good axe chop to the

Igor shared this in the chatroom today.

Beppe Grillo ( http://beppegrillo.it/english.php ) is a popular, aware comedian in Italy who is very opposed to fascism.

On Vaffanculo (’#*ck You’) Day he’s hosting a televised broadcast in which he and a lot of other people will tell crooked politicians to ‘just go away.’ As in America, there are apparently no clean politicians in Italy. Don’t you wish something like this would happen in fascist America, too?

Here’s his address to the European Parliament: 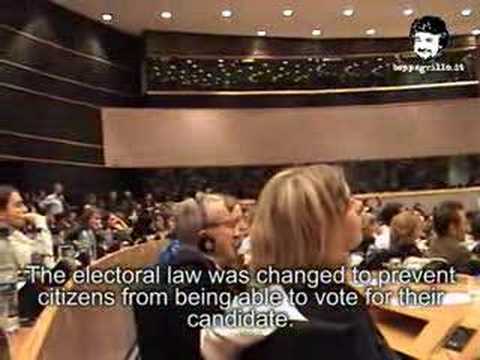 As we know, ‘voting’ only encourages these rats, since they now own and control all of the voting infrastructure. The sort of vote that Beppe Grillo casts really, really counts, which is why I constantly cast my vote against tyranny in EW posts and private emails

Won’t you do the same? We can end this global horror a lot faster, that way.

Meanwhile, gifters around the globe are taking away the world odor’s fuel, currency and sustenance (deadly orgone radiation) at an accelerating rate. I personally want to do a lot more than just take away their fuel because they’re clever enough to find other sources, I think.

These global parasites have never been able to withstand public scrutiny and voiced, lawful opposition, of course, which is why they’ve got trillions of dollars vested in the What To Think Network to keep the PJ folks flaccid and apathetic. Thankfully, they’ve been unable to jack up the PJ folks to their previous level of paranoia and xenophobia, so we can do our work unimpeded.

Thanks, Igor! By the way, folks, take note of films made in Rome from now on–I think you’ll be seeing the same glorious atmospheric confirmations for Igor Cinti’s and John Leach’s extensive gifting campaigns in and around that Capital that we’ve been seeing in films made in and around Los Angeles in the past few years. It’s good to contrast this with the conditions seen in films that were made before the gifting took place.

What a grand, imaginitive gesture! I read that he was voted Italy’s best comedian in the 1980s, several years after he had stopped appearing on TV. He went back to TV, later on, and caused a lot of network moguls to shake in their boots, as you can imagine. They had to let him say what he wanted simply because he was popular. The CIA would have murdered him for that in America, of course, but that’s probably only because the PJ white people, here, are not as bright and observant as the average Italian is and the American people of color are just too bullied and terrorized by the openly-fascist government to do or say much of anything worthwhile for now (who could blame them?).

We’ll spend some chat time going after any world-odor interference that’s in his way.