This glossary was started by @Cesco before his site went offline. I’ve updated it and will continue to update this post with any relevant new information.

This section is for anyone who may be unfamiliar with the common terms frequently used by those involved in the orgonite community, or orgonite gifters as we are also called.

A word of advice to the newbie that makes up his mind to start making and distributing orgonite(gifting):

Keep your creations simple(!) and follow the recommended tutorials.

A small related article by Don Croft is important to read, and can be found here.

Orgone is an omnipresent invisible sea of subtle etheric energy that is usually found in higher concentrations within living tissue. It interacts with the physical environment, having an effect on magnetic, optical, thermal, electrical, metabolic and chemical properties to varying degrees.
The term was coined by Wilhem Reich in the 1930s, as a way to describe an energy that he was observing in laboratory experiments that did not obey the laws of electricity or magnetism.

Although Reich’s discovery and naming of orgone energy is relatively recent, concepts of similar invisible life force energy have been present for thousands of years, known as qi, ch’i/chi, khi, gi and ki in traditional Chinese/Qigong, Vietnamese, Korean and Japanese cultures respectively.

In terms of properties, through observation it is thought that orgone is polarised, mass free, affected by living things, able to penetrate and travel along all known materials at different speeds, and in constant motion. Orgone flows in the direction of magnetic fields, moves at right angles to electrical fields, travels relatively slowly (50 meters in 20 seconds), tends to flow upwards, radiates a great distance, follows optical laws, is present everywhere in variable concentrations, is affected by weather, and travels more efficiently and with less resistance through water and earth than it does through air.

It is thought that orgone fields can transmit information without transmitting energy, and that every physical object has a characteristic orgone field.

Detectable by ones ability to feel ”subtle” energy, also visible by those with ”second” sight, also detectable by sound for some.

Orgonite attracts negative orgone energy and transforms it into positive orgone energy. In the most basic form, orgonite consists of a 50/50 mix of organic (resin) and inorganic (metal shavings) materials, with a quartz crystal contained within it.

Sometimes referred to as an orgone generator or converter, the name orgonite was coined by Karl Welz in the 1990s, to describe the material created by combining metal and quartz powders with resin. He developed this material for use in his radionics devices.

In the late 1990s and early 2000s, Don Croft, with the help of his daughter Nora, and wife Carol, developed the idea further, and started to cast quartz crystals and metal shavings with resin into paper cups and muffin tins, creating pieces of orgonite that can be placed anywhere to convert negative orgone energy into positive orgone energy.

To summarise, orgonite is orgone processing material. It converts orgone from one state to another, and is also thought to release orgone energy when stimulated by conventional forms of energy.

Orgonite affects most sources of negative energy(DOR) in its immediate area, and when deployed intelligently brings marvellous results.

Person dedicated to the task of gifting, sometimes connected to the grassroots movement of tactical gifting, but also a few lone rangers.
By now almost every country in the world has at some point had a gifter either living or visiting it leaving some Orgonite behind.

Abbreviation for Tower Buster or Towerbuster. 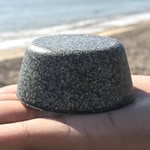 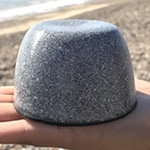 Abbrevation for Holy Hand Grenade (Monthy Python term), term given by Don Croft.
Larger version of the TB, usually made in a conical shape, but also in pyramid variations. 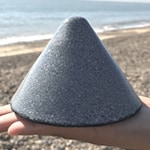 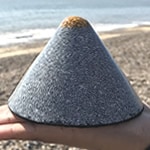 Usually deployed outdoors where the source of negative energy(DOR) is stronger than usual, the HHG is larger and more potent than a TB.
The term HHG also describes to some extent personal Orgonite Generators deployed for healing effects in homes and for personal use.
Standard HHG for outdoor use can contains one large crystal point with 4 crystals horizontal at the base, single or double terminated, metal shavings and sometimes a conical coil.

Since discovering ways to charge the strength of a crystal the coil can now be safely be left out.
Personal HHGs are usually flavoured by additional energy ingredients such as gemstones, coils and precious metals, such as pure gold. 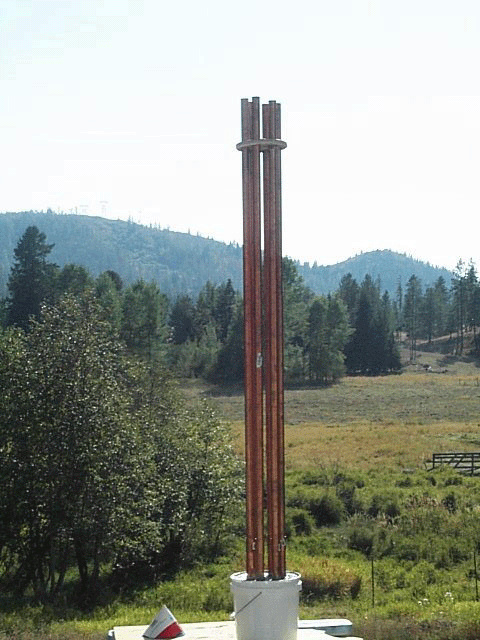 The term Cloud Buster was given by Dr.Wilhelm Reich for his atmospheric device. 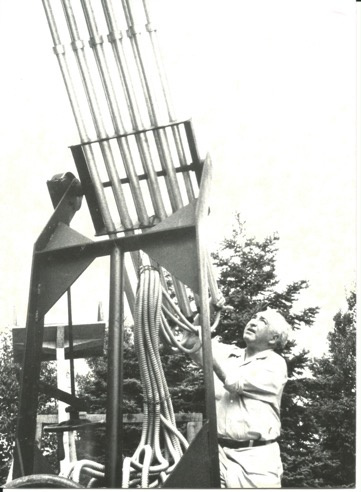 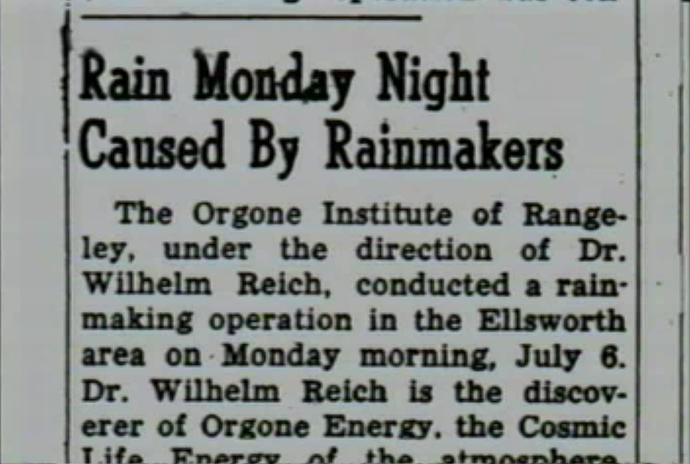 The Orgonite Cloud Buster is an Orgone Generator.

A CB when refered to here denotes a Orgonite Cloud Buster.

Detailed observations of the functioning of a CB.

Used to enhance the performance of a Orgone Generator, directing its energy, seldom needed/used in outdoor orgonite.

3 different coil formations that has been used and tested for their efficiency; Busters Button Coil, Big Secret Coil and Little Secret Coil.

It must be noted that coils are in no way required in orgonite, and benefits are generally found when pieces are held or placed onto the body, with the coils directing orgone energy.
Improper placement of coils, and/or improper winding of coils can give negative results, so it is not advisable to use coils in general.

Quote from @laozu:
Coils wrapped about crystals in orgonite devices are more likely to make the devices negative than positive, unless the maker has a well-developed energy sense. Just moving a coil a few millimeters can change the effect enormously.
Source: Laozu Kelly, a gifted energy sensitive who advanced our understanding of orgone and orgonite

Abbrevation for Saint Busters Button Coil, term given by Don Croft to a personal Orgone Generator with the same name, used for personal healing.
The coil is an ancient spiral shape built around the S shape flowing outwards, has been found on 4-5000 year old stone carvings and also crop circles.
The coil is used in Orgonite to direct the flow of energy of personal generators.
The most known commercially available generator that uses a SBB coil is Carol Croft´s Harmonic Protector.
Made in two variations, flat: 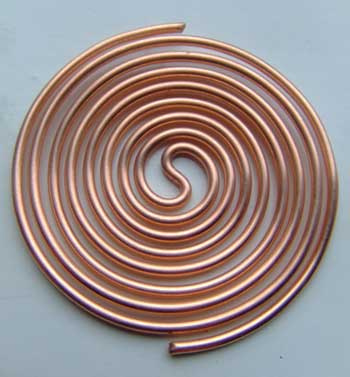 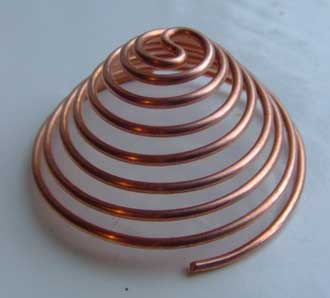 Clockwise Coil introduced by Don Croft, usually wrapped around a DT crystal and used as a personal energy amplifying device.
The Big Secret Coil is also one of the key components to a Dolphin Ball, a spherical orgone generator used in ocean gifting… 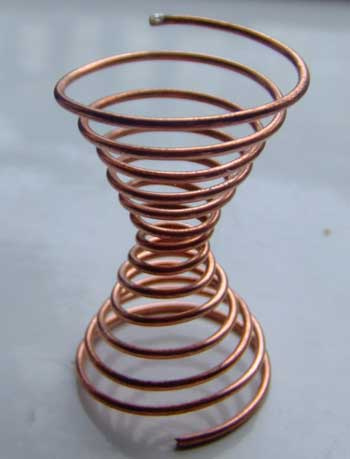 Also called a Cesco Coil.
Named as a tribute to Don Crofts “Big Secret Coil”, although quite different in appearance/construction.
The only one of the three coils that produce a strong energy field on its own.
Can be charged for greater output of etheric energy (Pyramid Charger).

Very sensitive to other energy components, can be combined with a quartz crystal point by correct knowledge.

Reacts negatively to magnets and their energy field.

The main component of The Little Secret Device. 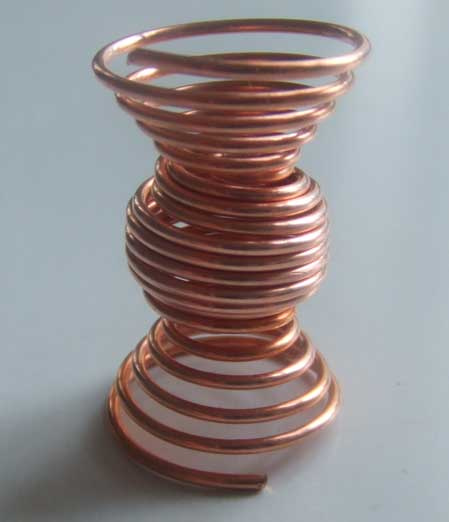 The most common and necessary ingredient used for making a Orgonite Generator is a Quartz Crystal.
There are usually two terms used to describe a Quartz Crystal, the abbreviations are ST and DT, we shall describe both below:

Abbreviation for Single Terminated, describing the termination of the clearly marked point of the crystal.
The Point is almost always the positive end of the crystal but there are some rare exeptions to this rule.
Shown below is a typical example of a Single Terminated(ST) Crystal Point, here the positive end is the clearly marked point at the top. 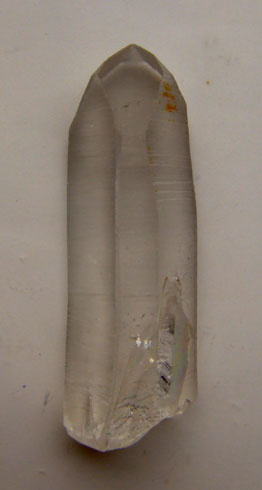 In some Orgonite Generators it is important that the positive end is facing in a specific direction, for instance the HHG or the CB.
This is quite easily determined by the average, non sensitive, person with a ST Crystal, as opposed to a DT Crystal.

Abbrevation for Double Terminated, describing the two clearly marked terminations on each end of the crystal.
As with the ST crystal the DT has a negative and a positive point to it, but with the DT it is considerably more difficult do determine which is which. This makes the DT crystal a unfit choice for those without proper knowledge/sensitivity.
DT crystals sometimes hold a bit more energy than a ST crystal but there are exceptions to this “rule” as well.
An example of a DT crystal is shown below, with the positive end at the top of the crystal:

Semi-precious and Precious Gemstones are used intelligently in personal Orgonite Generators for their specific energy characteristics.
They are not necessary for use in outdoor Orgonite.

For details of most gemstones used in orgonite, their history, meaning and metaphysical properties, please see the materials page here:
https://www.orgones.co.uk/materials

The most common is probably Aluminum and this is a good choice.

Copper, Brass, Steel, Titanium are other alternatives that also do the job.

One metal that should NOT be used is Lead, it will have a negative effect.

Of all natural metals Gold will create the most positive energy in orgonite, since it is expensive it is not widely used.

Gold leaf(24K) is available relatively inexpensively and in combination with Copper or Aluminum it will enhance the energy of a personal orgone generator.

Silver is a tricky metal in orgonite and until more experiments have been done with it our recommendations are to avoid using it.

Shavings are usually found at metal recyclers or industrial places that do lathe work with metals.
They can be found cheap and even for free at times.

Metal dust/tiny particles are not a good choice for making orgonite, nor are too large metal pieces
(see TB picture for good/ideal size shavings, it is close to real life size).

Metal BB´s may be used and are good for orgonite: the round ones used for air guns/rifles (not lead pellets).

Strips of Aluminum foil needs to be crumbled so that they aren’t just flat/uniform for them to work.

Cutting pieces of copper wire and using them as the metal component is not a good alternative.

Mike Emery has been writing and featuring in YouTube videos, talking about a device he calls an “orgone bubble”. 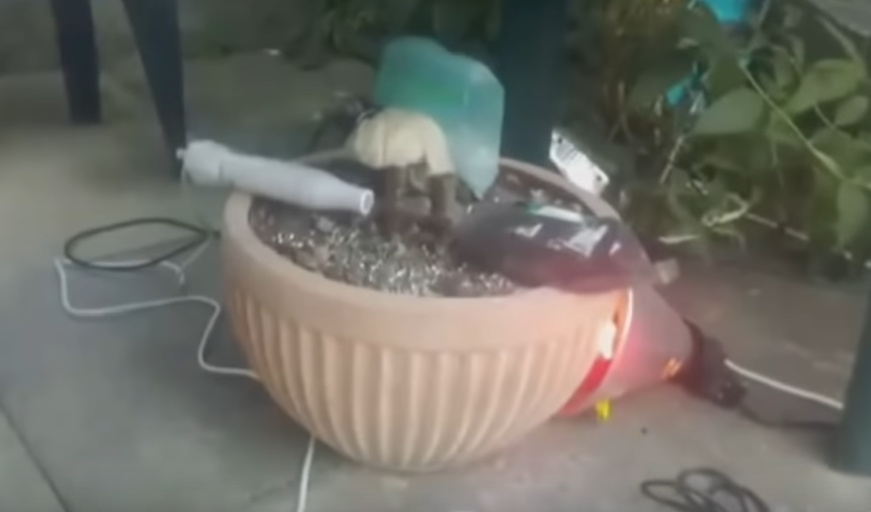 This is simply an orgonite cloudbuster base with a Violet Ray Tube and an Infra-red heater pointing at the matrix material.

Cloud buster bases do generate and process significant amounts of orgone, and all orgonite releases positive orgone when excited by other forms of energy such as this - this is why he feels euphoria close to it.